The Wildcat, And How The Texans Can Stop It

Share All sharing options for: The Wildcat, And How The Texans Can Stop It

What do These 3 Things Have In Common?

They're all part of a formation the Dolphins are calling "Wildcat".  Its early success is not based on magical alignments or genius play design.  Rather, it's early triumph comes from the execution of a few sound principles.

The 1st thing it does is confuse defenses.  This is simply because defenses have become used to lining up and finding their particular assignment on any given play.  For example, the MLB might spy the QB, follow the FB into the flat, or drop back into coverage. When the Dolphins line up in the Wildcat formation defenses either react with no assignments or play their assignments as though the Dolphins are running a "normal" offensive set.  The Wildcat takes advantage of the human tendency to be creatures of habit.  There are also numerous reads the defense is used to making.  They've spent weeks and years watching film to learn

tendencies, such as when a QB licks his fingers before a pass or when a pulling guard indicates a counter.  Right now, the Wildcat takes away a lot of these reads.

The 2nd thing it perhaps does best is simplify the Dolphins' attack.  This is actually a bit of sleight of hand.  It looks like the Dolphins are lined up in an exotic package full of all manner of trickery that the defense has to guard against, yet the opposite is true.  The basic premise of the Wildcat is to knock the defense off the ball and let Ronnie Brown pick a hole.

This is just like what Bruce Lee did to martial arts.  He broke the principles out of their forms and dominated anyone still locked in a particular form.

Another way to describe it is that the Wildcat formation is a half-formed screen pass.  Essentially, the Dolphins are giving their screen a head start.  As the ball is snapped, both of their tackles are already driving forward, and the ball is already in the RB's hand.  Ronnie Brown gets to take on defenders one-on-one, and he's probably better than 90% of the

individual defenders he's up against, so that's a pretty nasty mismatch.  Plus, he's got Jake Long and Vernon Carey plowing the road in front of him.

The 3rd other thing it does is it allows the Dolphins to dictate to the defense.  All of their efforts are headed in one direction.  Their best run blockers and their talented RB are all headed in the same direction.  They impose their will in a particular direction until the defense breaks down and gives way.

Anyone remember this guy? 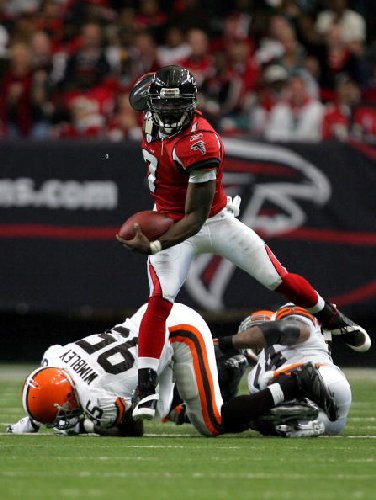 Ah, Michael Vick.  He was a conundrum to defensive coordinators for years.  Especially when Atlanta installed their version of West Virginia's zone option shotgun scheme.  West Virginia's scheme looks remarkably like the Wildcat.

The read from the quarterback in this option comes immediately after the snap, which is taken out of the shotgun. The quarterback reads the defensive end, and decides to either give the ball to the running back who take it between the tackles, or he keeps it himself and runs outside.

Ronnie Brown takes the snap, reads the defensive end, and decides whether to hand off to Ricky Williams or run it himself.

The other key principle to the system is that it comes out of the shotgun, with three or four wide receivers, spreading the defense out. A defense can't run a traditional set, because they have to account for the extra wide receiver(s), which opens up more running lanes for the offense.

Lining up Chad Pennington at WR and Jake Long outside of RT Vernon Carey forces your average defense out of traditional sets.

The thing is that defensive coordinators figured out how to stop Michael Vick and the Falcons' attack, despite the individual mismatches.

So How Do The Texans Stop This Thing?

variations .  The most important thing is for Mario Williams to stay at home in this game.  Rather than try to get to plays from the Wildcat formations, he needs to let plays come to him.  The biggest reason is that Mario is a force.  Whoever the Dolphins match up against him is going to have his hands full, and may even need some help to stop Mario.  So what happens when you ask someone other than an LT to handle Super Mario?  He should be able to blow them up over and over.

Other things that can be done to stampede the Dolphins' Wildcat:

If Pennington lines up at WR, he's asking for contact.  Jam him every single play.  Block him to the ground over and over.  He's not protected as a QB when he lines up at WR.  If the Dolphins are going to expose one of their most important players like that, make them pay on every play.  Having their QB beaten up at the line of scrimmage will make them think twice about calling the Wildcat.

The Wildcat takes advantage of numerous threats, one of them being Ricky Williams running with the ball.

Compared to Ronnie Brown, Ricky Williams sucks.  Since the Wildcat is an option, it lets the defense dictate who gets the ball.  Ricky Williams is a lot easier to bring down.  I'll take DeMeco Ryans vs. Ricky Williams one-on-one any day.

This one is only away from the red zone.  Ronnie Brown has completed a few passes out of the Wildcat, but he's no QB.  Does anyone think he can seriously complete 3 consecutive passes if they're not into the end zone?  Michael Vick was screwed when defenses forced him to win with his arm.  Ronnie Brown won't do any better.

Ronnie Brown has to make a snap decision about what to do with the ball.  One in a while, when the Dolphins come out in the Wildcat formation, audible the defense into some random formation.  Have Mario stand up and line up somewhere else.  Move Morlon Greenwood move back to saftey and bring Will Demps up to the WLB spot.  Make Ronnie Brown lose track of who/what he has to read.

The Texans have everything they need to win this week at home against the Dolphins.  Bull vs. Cat-Fish.  Texans win.