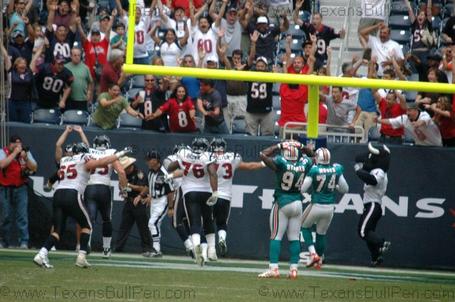 Mike Brisiel and the Texans' offense played a great game.  He took some of his valuable time today to do an interview for Battle Red Blog.  We know it will get you fired up about the Texans.

See the full interview after the jump.

(Special thanks to texansbullpen.com for images)

The Texans players knew they were winning this game. What do you say to your teammates on the sidelines to keep them confident and amped up?

I don't think anyone had to say anything. Everyone was just so hungry for a win that we knew we couldn't let another one slip through our grasps.

What is the feeling in the locker room now?

The feeling in the locker room after the game was so good. It was such an emotional victory everyone was just kind of spent because they left everything they had out there on that field.

The Texans were preparing hard in training camp. Are practices still the same now? Is everyone giving maximum effort?

Practices haven't changed at all. We still go out there every week and prepare to win. Everyone knows we still have a lot to improve on.

I love playing with the guys around me because I know there is no quit in them. Everyone gives their all week in and week out and we had let a couple close ones slip away but It is a long season and anything can happen.

There's been some negativity about players on offense. How much confidence do you have in the teammates in the huddle with you? And specifically Chris Myers and Matt Schaub?

I have a ton of confidence in the guys around me. All a fan gets to see is what happens on game day but I get to witness the dedication and time guys like Matt and Chris put into it. I get to witness every practice how much they care about what they are doing and that really just builds the respect and confidence I have for those guys.

How proficient is the Texans Oline in the zone blocking scheme after Week 6 of the season? Will the Oline continue to get better?

There is an old saying that states you are either getting better or getting worse. There is no in between and right now I see our Oline improving each week and I think we are starting to have something special there.

Everyone on the Texans Oline hustles every play. They always seem to be hunting down the next person to block if no one is immediately in front of them. What does the Oline do to keep up that hustle for the full 60 minutes?

I just think it shows how much these guys care about what they are doing. Everyone is willing to lay it on the line for 60 minutes and whatever the outcome we know that it will never be the lack of effort that holds us back.

We hear from Coach Kubiak every week. What are coaches like John Benton and Alex Gibbs telling you personally? What have they been telling the O-line?

Benton and Gibbs are guys that understand the game of football. They know what it is going to take to allow us to reach our goals as an offensive line and if they have taught us anything it is that we control a lot of what happens out there.

How close are you to Matt Schaub? Do the QB and Oline hang out outside of games/practice?

Everyone on the Oline and Matt are good friends. I think we have a good relationships between the guys and that is what it has to be like. You have to know how people are going to play around you if you want to build into a cohesive unit.

How did it feel to put the game winning block on Starks during Schaub's draw? How did you know which way to push him?

I really didn't do anything special. Matt just made an outstanding run and everyone on that play knew what they were going to have to do and it was just a great play call and it was a great way to get our first win.

What was it like making the tackle on the interception?

It was interesting. I think it was my first recorded tackle ever haha.

Who was your favorite guy to hit on the Dolphins defense?

They had a really good defensive front and it was a battle for me on every snap. I just tried to do my job and not let anyone down around me.