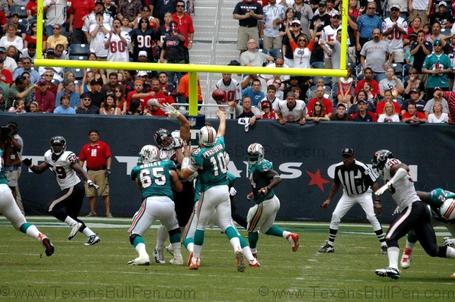 Tim Bulman and the Texans' defense played a great game.  He took some of his valuable time today to do an interview for Battle Red Blog.  We know it will get you fired up about the Texans.

See the full interview after the jump.

(Special thanks to texansbullpen.com for images)

The Texans players knew they were going to win this game.  What do you say to your teammates on the sidelines to keep them confident and fired up?

Over the past few games we have been in position late in the game to win.  In the NFL every week, it seems that a winner and loser is determined by as little as one point and could come down to one play.  I was on the sideline just watching our offense make that play.  Andre made one of the gutsiest catches I've seen on 4th down and I really don't know how he made it.  He's definitely a special player.  All you can do when the offense is on field is cheer your buddies on and stick to the plan.

What is the feeling in the locker room now?
Everyone feels better after a win and to put in the work week in and week out it is great to see it come full circle.  We play this game to win so every week; that is the primary goal, so anything else is falling short.  I think our team feels the confidence we had in ourselves and our plan.  We will take it one day at a time, something that coach preaches to us often, and hopefully build some great momentum.

The Texans were preparing hard in training camp.  Are practices still the
same now?  Is everyone giving maximum effort?
Everyone gives maximum effort.  Our team has no room for anything less.  Practices are still the same for game weeks, Wed. and Thurs. being the big workdays but more geared toward who we are playing that week.  Coach Kubiak takes care of us better then any coach.


There's a saying.  It's not the size of the dog in the fight, it's the size
of the fight in the dog.  How big is the fight in Texans players right now?
The group of guys we have on our roster all are hardworking professionals.  We show up on time we lift weights and prepare and practice and play as hard as we can every week. We have been doing that since March, and nothing has changed. Everyone is accountable.


There's been some negativity in the media about players on defense.  How much
confidence do you have in the teammate next to you?  For example, Amobi Okoye or
DelJuan Robinson?
We don't get caught up in that.  We spend a lot of time together as a D-line in meetings, on the field, in the weight room, traveling to games.  We go out to dinner every week, so everyone on our D-line is close.  We know how hard each one of us works and there's no doubt that whoever is next to you, that you will get their best effort.  I think our greatest asset is there isn't a talent drop-off.  Everyone can play or else they wouldn't be here.  Everyone brings a little something different to the table, but our guys we have are all confident in each other.


How much does the Texans defense work on fundamentals like tackling?
Every week we do tackling drills.  We have been doing these drills since OTAs.


We hear from Coach Kubiak every week.  What have coaches like Frank Bush and Jethro Franklin telling you personally?  What have they been telling the D-line?
Frank and Jethro get us prepared very well for both the run and pass.  They make sure we see every look that we might get be in pass protections, different runs, etc.  They do a great job at getting us to truly understand the team we are about to play.  They have told me to just keep taking advantage of my opportunities.


The Texans have been able to pressure Peyton Manning and now Chad Pennington.
Is the Texans pass rush getting better?  Besides Mario, who is stepping up their
game on the D-line?
I think that the whole D-line is becoming more comfortable and getting a good feel for each other.  I think everyone is stepping their game up and realizing that with what we want to accomplish we have to keep improving as a group.


Other than the blown coverage on Patrick Cobbs, the Texans really handled the
Dolphins' Wildcat formation.  What was it like as a defense game planning for
the Wildcat?
Like any week. every team is different and can pose things you haven't seen. Our coaching staff did a great job at preparing us for the Wildcat formation.  Every practice we saw different looks and situations we might be in.   And we just had to know what our responsibility was on each situation and execute.


You're making an impact on special teams.  What does it feel like tearing
down the field to cover the kick?  Does it feel any different on the return
team?
Covering a kick is a rush like no other.  The place is rocking and your adrenaline is through the roof.  You run as fast as you can and try to do whatever it takes to make the play.  It's almost a controlled abandon.  Each phase of the game is different.  Return team is all about getting the right angles and having good timing.


Do you know that your block on the Jacoby TD punt return took out 3 Dolphins
defenders?

Haha.  I saw the film I was just trying to do as much as I possibly could to make our return successful.

How did it feel to drill Chad Pennington?
Feels great anytime as a D-lineman you can get to the QB successfully.