Share All sharing options for: Kevin Smith: Ready to Roar

College football brought a bevy of highly touted running backs to the 2008 NFL Draft.  With the talent pool being so deep at that position, it was inevitable that a few impact runners would fall to the middle rounds.  Two beneficiaries of that inevitability were your Houston Texans and their opponent this Sunday, the Detroit Lions.  Both teams used their third overall pick on bona-fide game changers.

Like Steve Slaton, whose recent play has all but cemented his spot in the starting lineup, Kevin Smith has reenergized the fan base with his mix of speed and vision.  He has even had a few mentioning him in the same breath with the Lions' legendary Barry Sanders.  While Smith himself is quick to downplay any comparison to Sanders, he is supremely confident in his ability to run the ball.

The Texans would be well served to keep an eye on Kevin Smith as two teams desperate for a win square off in the Bayou City.  He certainly has the skills that could give a defense fits from start to finish.

Smith was selected with the first pick of the third round.  A hardnosed runner for the UCF Knights, Smith amassed season after season of gaudy numbers.   A true workhorse, Smith carried the ball a record 450 times last year ('07) and his 2,567 yards were just 62 yards short of toping Barry Sanders' NCAA single season rushing record. 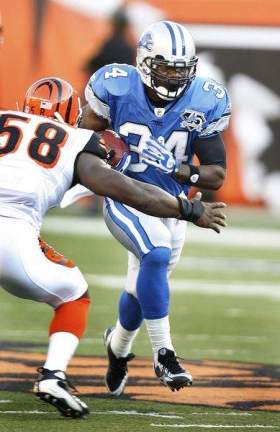 At Lions' training camp, Smith quickly established himself as a running back with starting potential.  According to Brian VanOchten of the Grand Rapids Press, "one simple handoff is all that rookie Kevin Smith needed to end the debate about whether he or fifth-year veteran Tatum Bell should be in the starting lineup for the Detroit Lions in their Sept. 7 regular-season opener."

During the 3rd preseason game against the Browns, Kevin Smith put together a brilliant 25 yard touchdown run.  He showed the ability to bounce the ball to the outside, shed arm tackles, and use his blockers to get to the end zone.

With that game and the subsequent release of Tatum Bell, Kevin Smith found himself in the driver's seat in the Motor City.  Essentially, it was his job to lose...

Shortly before the end of the preseason, the Lions picked up free agent running back Rudi Johnson.  Rudi Johnson and Tatum Bell hit the revolving door, with Johnson winding up on the inside and Bell standing on the outside... with Johnson's duffel bag...?  In any case, Rudi Johnson performed well enough in the first four games to warrant the starting job (23 - 108 / 4.6 ypc).

Smith, not used to playing second fiddle, made it very clear that he feels that he should be the starter in Detroit.  Voicing his displeasure, Smith said:

"Personally, I don't like it. I think I should be playing a lot more.  But it's all about winning.  I've got a new attitude. I went home at the break and got a new attitude, I'm just going to get me better. Now I'm going to work on getting myself better every day and try, not the impossible, but I've got the mindset that I'm going to try to hit a home run on every play now. I might only get one carry. If I only get one carry, I've got to make it count.''

In last week's game, Smith only ran the ball five times (all in the 2nd QTR).  With only 4:22 left in the half, Smith ran the ball off the left tackle, going for 50 yards and put the Lions deep in Vikings' territory.  Miscues on offense kept Detroit out of the end zone, but Smith's 50 yard run was one of the highlights of an otherwise dismal day for the Lions.

Smith left the game with a bruised shoulder, but should see action this week.  Seeing as how Rudi Johnson ran for a paltry 2.2 ypc  against the Vikes, I wouldn't be surprised if the Texans see a little more out of the rookie running back.  As evidenced by his performance last week, he's seems to be backing up his tough talk and making the most of his opportunities.

Luckily for the Texans, they have a pretty special running back that also has been playing as if he has something to prove.  It will be interesting to see which one of the rookie sensations can take another step forward as they each look to establish themselves as the preeminent running back of the 2008 draft class.