This post-game recap comes with a huge disclaimer:  I didn't get to see the first twenty-five minutes of the game or the first three Texans scores.   I assumed that I would be watching the Texans in the comfort of my own living room, while a pan of chicken wings fried outside.  I had a fridge full of beer and a 5 lb bag of chicken wings - it was going to be beautiful - until the assholes who run the local networks screwed me out of my game.

Anyway, I hit my local watering hole only to find that it was CLOSED.  WTF?!  Then I head over to the bar that's three doors down and the idiot bartender couldn't figure out how to work the remote. I'm serious. The fucking idiot is standing there with five remotes in his hand and he can't figure out how to get the Texans game on the screen.  I figured screw it - I'll drive the 20 minutes to Champps, where I knew for sure they would have the game.

Oh, and if being a Texans fan living in San Antonio didn't suck enough, local AM radio stopped carrying Texans games this season.  Not to harp on the whole "San Antonio hates the Texans" thing, but how is it that SA has two dedicated sports talk radio stations, plus have a news talk station that also broadcasts games, but I can't get one of them to beam me in some Texans football? Es una disgracia.

So anyway, I walk into Champps just as Hanson is booting his first 54 yarder (21-3).   I make a beeline to the back and find some other dude who was also scrambling to find a place with the game.  Mix in my buddy who showed up at halftime, and the afternoon went from being utterly craptastic to pretty kickass.

It isn't very often that a team comes out of the gate and fires on all cylinders for three straight drives.  The Texans did just that.  In fact, they were well on their way to four straight touchdown-scoring drives until QB Matt Schaub was stripped from behind.

Matt has gotten better at feeling pressure and getting rid of the ball, but on that play, he scrambled out and was trying to find an open receiver.  The Monday Morning QB in me says Schaub should have thrown the ball out of bounds instead of trying to run back to the line of scrimmage.   Barring that one blemish, the Texans easily played the most complete half of football this year - and if they score a touchdown, it would have easily gone down as one of the best halves in the history of the franchise.

I predicted that Slaton would bust a run of over thirty yards - and sure enough - Slaton delivered.  While Slaton won't grind down a defense, he has a knack for knifing his way down the field and when he gets passed the first line of defense, he's motoring for big yards.  So God bless you, Steve Slaton.

Ahman Green is continuing to carry an almost equal share of the load.  He's been steadily becoming, dare I say, a reliable back.  What impresses me the most about Ahman Green is his ability to make quick decisions at the line.  He has shown good footwork at the point of attack and still has the ability to burst ahead for positive yardage.  I've seen enough in the past two games to put away my "Cut Ahman" sign... for now.

Andre Johnson feasted on a steady diet of slants and deep-ins.  While he didn't find the end zone, he was instrumental in every one of the Texans' scoring drives.  Sunday was his third consecutive game with 100+ yard receiving, as he's averaging over 100 yards a game on the season.  AJ is well on his way to Honolulu.

From what I saw of the first half, the defense did their job against Orlovsky and Co.  Now, that certainly isn't the same as holding your own against a Peyton Manning led offense, but still, they kept the Lions out of the red zone.  In fact, the Lions were kept out of the red zone all game long.  Both of their scores came from outside the Texans 20. 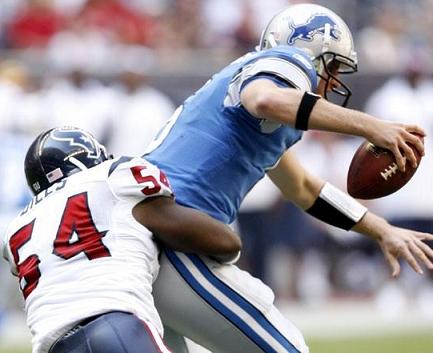 Statwise, there wasn't anyone who filled up the sheet - but that was due in large part to the Texans dominating the time of possession on offense.  The Texans defense was out there for less than twenty minutes. Think on that for a second.  The Texans defense was on the sidelines for more than 2/3 of the game.  They should be well rested and ready to attack a Bengals team that has given up an AFC-worst 26 sacks on the year.

Mario was double and triple-teamed on nearly every play.  He didn't have the dominant game that some may have predicted, but he did occupy the O-Line enough to give others a chance to pressure the quarterback.  I had a feeling that the Lions would slide protection over towards Mario's side, so I boldly predicted that DT Tim Bulman would register his first sack of the season.  Sure enough, Bulman delivered.  Damn straight.

FS Will Demps and LB Zac Diles again had good games, both leading the team in tackles.  Diles stood out in particular.  His six tackles, two for loss with one sack, combined with his two quarterback hurries and a defended pass, easily made him the defensive player of the game.

About those two touchdowns...

I heard a story of a kid that climbed a tree that was entangled in power lines.  He grabbed a hold of the power line and was burned to a crisp.  As the story goes, It took several days to find him because of the bizarre nature of his death.  Sunday, Petey suffered a similar fate.  He was burned so badly that he deserves a new nickname.  So it is born: Crispy Faggins.  Crispy was burned beyond recognition.  Really, I thought Andre burning Jason David last year was as bad as it gets - this was worse.

Understandably, Kubes was pissed.  From his post-game presser:

Kubiak stopped just short of putting it all on Crispy Pete, acknowledging that the coaching staff screwed up too. Calvin Johnson ran a go route.  There were no moves, no cuts, no picks, just pure unadulterated speed.  Faggins found himself alone on an island - in no man's land.  Now, here's where the coaching miscue needs to be addressed.  How the hell do you leave your slowest cornerback in single coverage against one of the best wide receivers in the league?  Inexcusable, for sure.

As for the Kevin Smith touchdown... well, it goes back to the whole, "I was drinking and carrying on" thing.  I saw the touchdown, but wasn't paying attention to who it was that was out of position.  All I know is that Kevin Smith is going to be a good back in this league.  He has the size and the talent to be a pro for a long time.  As long as he keeps running with that chip on his shoulder, the kid will continue to put up good numbers.

Yes the game hung in the balance - even with ten seconds on the clock.  For any other team, it would have been ballgame - but not our Texans.  Not after the Rosencopter.

Fact is that the Turk put three consecutive punts inside the five-yard line.  I cannot emphasize how huge those three punts were.  A lot of credit to goes to the coverage team, but it was Matt Turk who placed the ball in position for the guys to make the play.

I think you can look at the opponent and say okay - it was a good win against a bad team.  You can also say that the Texans came to play.  Bad calls and blown plays are going to happen, but at the end of the day it's all about the scoreboard.