To say that Sunday was a good day would be a bit of an understatement.  Have I had better, sure - but last Sunday was the culmination of a week's worth of planning that came to fruition.  I caught a ride to the bar, met up with some buddies, and was able to watch the Texans dominate the Bengals for the better part of four quarters. Mix in a night of steady drinking, and you get another fuzzy rundown of another Texans win...

For the second time in three weeks, the Texans were treated to a punt returned for a touchdown.  PR Jacoby Jones is leading the league in punt returns for touchdowns (2) and is averaging nearly 15 yards a return.   He is still swinging the ball a little more than I would like to see, but as long as he's getting to the house untouched, you won't hear any complaining from me.

Leaping into the arms of his biggest fan (read: Mom) is also a unique touch.  If he keeps it up, he could have a deal with Campbell's Chunky Soup before the season is through. 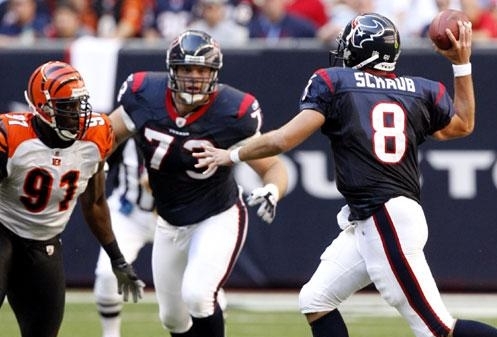 Seven games into the season, the Texans carry the distinction of being the only team in the AFC with both a top-five rushing and a top-five passing attack.  Leading the charge to the top of the conference rankings is none other than QB Matt Schaub.

In his past four games, Matt Schuab has thrown for 1233 yards, 9 touchdowns, 2 interceptions.  These numbers didn't come against the league's elite, but they do show that Matt Schaub is becoming comfortable under center.

It's easy for us to forget that he is only a second year starter.  His early struggles can be attributed to pressure of expectation and the misfortune of facing two of the league's top-three defenses to start the season (it would have been the all three top-three had we played the Ravens in week two).  He's slinging the ball with a ton of confidence right now, and is keeping his eyes down field and letting his offensive line worry about the pass rush.

The NFL leader in receiving yards and receptions, WR Andre Johnson, has a knack for beating coverages. It's obvious that he is the focus of opposing defenses, yet he is constantly finding creases in the defense. He is proving himself to be one of the best receivers, not only now, but of his era.  Imagine what he would have done had he not been saddled with QB David Carr for the first four years.

I had a drunken debate with a cousin of mine (Houston-based Cowboys fan) and I asked him, "Who would you rather have on your team - Andre Johnson or Terrell Owens?"  Of course the fan in him said TO, but after the tear that AJ has been on, I don't have a doubt in my mind as to who I'd rather root for on Sunday.

Speaking of receivers, I can't think of a better receiver to compliment Andre Johnson than WR Kevin Walter.  He's a relative unknown in the league, but he ranks up there with the rest of the best when it comes to touchdowns.  Sunday he hauled in two more to give him a tied shared of second place (10 players).  He is a player who always seems to have his head in the game, as evidenced by his catch, tumble, and run that resulted in a touchdown.  Special players make special plays, and that was a special play.

It was tough sledding for rookie RB Steve Slaton on Sunday, but he still managed to churn out 53 yards on 15 carries.  Most impressive was his 20 yard run in the fourth quarter.  Seriously, someone needs to ask Bengals DE Robert Geathers what it's like to get a piggyback ride into the end zone.   Not only did Slaton drag Geathers to the end zone, he ran through CB Jonathan Joesph for good measure.  It was one of Slaton's greatest runs to date.

As awesome as it was to see Slaton drag two defenders across the goal line, he wouldn't have been possible without the phenomenal run blocking of his teammates.  Of course Vonta Leach's decleating of LB Dhani Jones was the crown jewel of the run, but several other Texans put their stamps on the pull and pitch.

Andre Johnson ran straight to the inside and perfectly sealed off LB Rashad Jeanty.  Getting to the next level was TE Joel Dreessen, who came completely across the formation and made sure DT Domata Peko stayed off of Slaton's heels.  And leading the group of blockers from the middle of the formation was C Chris Myers.  He quickly got into the second level and effectively spun LB Brandon Johnson out of the play.

Running twenty yards through a sea of defenders cannot happen unless there is some good blocking, and that was some of the best blocking I've seen this season. 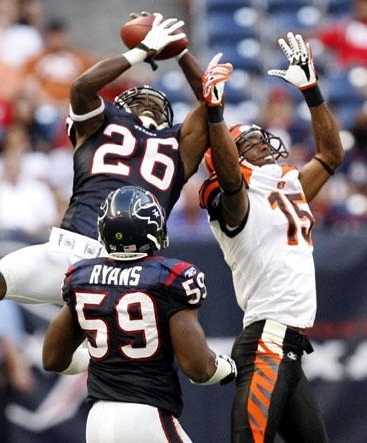 The defense allowed a league low six points this week.  And while they gave ground in the first half, the Bengals were only able to come away with two field goals.  Having seen this unit look outright miserable earlier in the season, they were able to keep one of the most talented pass catching duos at bay.   Combined, the two star receivers were only able to amass 98 yards on a handful of catches.

CB Dunta Robinson looked like... well, Dunta Robinson.  He was constantly in the vicinity of the ball and was making plays.  He finished the game with nine tackles (seven solo), two passes defended, and one interception - and he almost had two.  Dunta Robinson has a nose for the ball.  His instincts in pass coverage and run support are a welcome addition to a secondary plagued by shaky play.

Joining Dunta in the interception column was free agent acquisition CB Eugene Wilson.   I was pretty bullish on his addition to the team, citing his big game experience with the New England Patriots.  If you take away his fluke fumble vs Miami, he's been a steady contributor in his limited minutes.  And like Robinson, Wilson made a couple of plays on the ball notching his second interception of the season.    Gary Kubiak said the following about Wilson's contributions:

"He's rubbing off on our players. He's very smart. He's been in more big games than anybody we've had waltz in our locker room. He handles situations well. He's got a lot of confidence. He's cheating in situations where he recognizes a formation or a tendency. That's how he makes plays. It's taken some time for us to get comfortable with him, you know. He walked in my office last Tuesday, I think, and said, ‘Can I come see you?' I said, ‘Sure.' He said, ‘Coach, I can make some plays for you.' I said, ‘Well, I know. You're fixing to get a chance to do that this week.' And he did."

With the help of the secondary, the Texans won the turnover battle - decisively.  Not enough can be said about the importance of killing your opponents drives with momentum changing turnovers.  And although Mario Williams' sack/strip of Bengals QB Ryan Fitzpatrick was the Texans' first forced turnover of the game, it effectively ended the Bengals day.

Setting Sights on the Vikes

The Texans still have an uphill climb, but after beating three teams that they should have, it's time for them to focus on heading north and beating a team who is also looking to right the ship.  At 3-4, the Vikings will be every bit as hungry as the Texans to get even with the league.  .500 here we come.