I'd be lying if I said that my extended absence was purely work related, but truth be told, higher headquarters inspections are a mother.  So again, I was Aiming High this past weekend and didn't watch the game until after the contest had long been decided.  Like last time, I did my best to avoid all contact with football until I got home and started chugging beers.  The only thing that clued me in to what happened was a text from a buddy of mine (Saints fan):  "Your team is kicking ass".  Imagine my excitement...

There was a certain irony to the unfortunate events that took place on Sunday afternoon.  It's taken me several days to actually put into perspective what I saw.  In a sense, the game left me feeling Minnesota.

First and foremost, the Texans dominated the game for nearly three quarters of play.  Starting with the very end of the 1st quarter on through the middle of the fourth, the Texans looked like a team bound and determined to win. 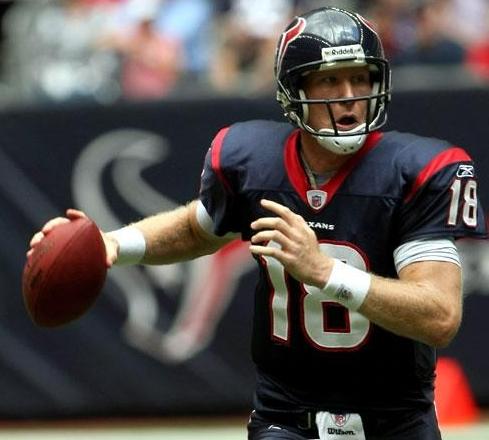 The running game looked like it is finally rounding into shape.  The Texans ran the ball 33 times for a total of 156 yards (4.9 ypc) and while we caught a glimpse of a productive Ahman Green, Steve Slaton continued to prove that John Antonik, West Virginia's director of New Media knew exactly what he was talking about.  In an interview with BRB Antonik said, "I know some have likened him to being a situational player in the pros but I believe he has the ability to be an every down back similar to what Willie Parkeris doing with the Steelers. I think an important thing to remember about Steve is the fact that Alex Gibbs is with your organization. Gibbs' zone-blocking schemes were copied right down to the letter by Trickett at West Virginia and Steve is very familiar running the football in that system."

Through the air, Sage was efficient and posted nearly identical numbers to that of All Pro QB Peyton Manning.  And like Manning, Sage spread the ball around to eight different receivers.  With a mix of quick hits, roll outs, and button hooks, Sage was your prototypical game manager.  If Sage did nothing else for the Texans, he helped Andre Johnson seemingly regain his mojo by giving him the opportunity to make some tough catches in the clutch.  9-143 / 1 TD = Welcome back Andre.

With the help of an efficient running game, Sage was able to keep the chains moving.  For nearly four quarters, Sage played relatively mistake-free football.  And mark my words, if Sage doesn't singlehandedly initiate the self destruct sequence, we would have a full-fledged quarterback controversy on our hands.   And while I alluded to Sage playing a smart game ala Peyton Manning, the comparison ends with the turnovers.  As sure as the image of Mario hula dancing is burned into the brains of Texans fans worldwide, the two Rosenfumbles will not soon be forgotten.

Sage's inability to perform in the clutch has all but cemented is place as the Texans' number two quarterback for the rest of his time in Houston.  Shit happens, and he deserves a shot in the arm and a "we'll get ‘em next time" pep talk, but make no mistake - Sage Rosenfels bares sole responsibility for the colossal collapse last Sunday.   He undoubtedly cost the Texans their first win of the year.

After the Titans game, I called out OLB Zac Diles for missing tackles and his late reaction.  I even opined that if he kept playing like that, that he would find himself relegated exclusively to special teams duty.   Well Sunday, it looked like Zac was really zoned in. 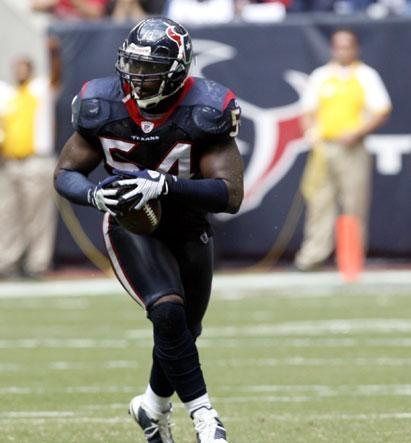 In short, Diles out-DeMeco'd DeMeco.  Zac led the team in tackles and was making plays behind the line as well as in coverage.  Congratulations to the 2nd year pro for stepping it up.  Let's hope that is a sign of things to come.

Once again, Mario looked like a man who wants his first class tickets to Hawaii booked by early November.   He was relentless in his pursuit of Manning, as evidenced by his two sacks and three quarter back hurries.  Here's the cool part, he's just entering his third season.  He is going to get even better.

Speaking of the defensive line, there were a few noticeable changes, the first was the ever present  Deljuan Robinson.   I had to pause, slow-mo, and rewind during the Colts opening series because lo and behold - Amobi Okoye did not start the game.

According to Kubiak's post game presser, he said that they were limiting Amobi's snaps in order to get him in better position to rush the passer.  I don't know if it's an indictment of his ability to play the run, but starting on the bench for a game is something the kid isn't accustom to.  In any case, this may just be a learning tool for the second year player out of Louisville.  It wasn't all bad though, because despite his lackluster stat line, Kubiak said that Okoye had played his best game of the year.  [Author's side note: Frank Okam was inactive, and I was sad.]

The secondary still remained suspect, especially in crunch time.  A lot of it falls on the play of the cornerbacks.  CB Jacques Reeves is speedy enough to keep up with most anybody in the NFL, but he seems to be lacking in the one asset that a cover corner needs in order to excel - instincts.

He seems to have very little feel for when the play is coming his way, as evidenced by his inability to stop plays despite running stride for stride with the wide receiver.  I'm happy that he can get into a receiver's pocket, but it doesn't do any good if he can't find the ball.

Now, I will give him credit for the pass deflection, because let's face it - it was a good looking play.  I know you at least cracked a smile when he knocked that ball down.  Personally I pumped a fist and said "hell yeah".   Still, the play at corner needs to improve three fold if we expect to turn this season around.

For ten minutes, I sat completely expressionless.  The DVR was stopped and the only thing that was on the TV was the screen asking me what I wanted to do with the recording.  Then the entire irony of the moment became clear as my bloodshot eyes crossed into a blur.

I thought back to September 14th.  Instead of watching what would have been the Texans first home opener, I was left to watch the Minnesota Vikings control the game on offense while keeping the Indianapolis Colts at bay defensively.

For all of Minnesota's successes that day, the one thing they were sorely lacking was a quarterback who could throw.  With each of Tarvaris Jackson's throws that sailed out of the reach of his target, I thought, "I bet they're wishing they traded that second rounder for Sage right about now."   And sure enough, with only five Ryan Longwell field goals to show for their efforts, Minnesota gave Peyton Manning and Co. all that they needed to rally in the fourth quarter and steal the win.  I thought, "Man, Minnesota screwed up by not pulling the trigger on Sage."

Fast forward to October 5th, the Texans' rescheduled homeowner.   Again I was watching a team outduel the Colts for a majority of the game.  And with Sage at the helm, the Texans were able to move the ball effectively, scoring five times (3 TDs/2 FGs) in their first seven possessions.   Then Sage, the man who was going to make the Vikings regret not trading for him, the man who I thought would have led Minnesota to a surefire win against the Colts, the man who could have given the Vikings a legitimate shot at the playoffs, did the unimaginable; he single-handedly lost the game for his team, for my team,  the Houston Texans.

I don't know if I've ever looked California... but for the past few days, I've certainly been feeling Minnesota.   Here's hoping that the Dolphins can be the whipping boy team that the Texans so desparately need right now.