Watching Sunday's game took me back to a time in my mind, back to 1995.  It was the Edinburg North High School campus sometime just after the day's final bell.  Teenagers were being teenagers, enjoying the end of another skull-numbing day.  I was walking and talking with a friend, heading out to my car when I saw something about to pop off.

This kid (who we'll call Red) was marching down the corridor with a group of his homeboys following close behind.  First thought - there's gonna be a gang fight - let's go check it out.  So I see this kid and his cadre of compadres set their sights on this guy sitting down at a table talking to his chick. We'll call that guy Blue.

So anyway Red demands that Blue gets up.  Blue tells him to fuck off.  Being goaded by his homeboys, Red pushes a still-seated Blue.  So Blue, alone in front of this ever growing crowd of bystanders, gets up.

Red again pushes a now-standing Blue.  And with amazing quickness, Blue unleashed a flurry of pounding punches, pummeling Red's nose, chin, neck, mouth, eye...  each shot echoed louder than the last.  I mean seriously, Red got the ever living crap out beat out of him.  It was so bad that even Red's friends started to slink away.   After a couple of minutes, security guards came in and rescued Red from the savage beating.

The story is hardly football related, but the Texans' performance on Sunday reminded me a lot of that one-sided fight I saw some thirteen years ago.  Like Red, the Texans made mistake after mistake and wound up getting embarrassed in front of their home crowd.

The Ravens, led by rookie QB Joe Flacco, only completed 16 passes.  Unfortunately for the Texans, nearly a quarter of them went for over twenty yards.  Even WR Troy (Slash-Revisited) Smith harkened back to his days at the Ohio State and threw a 14 yard TD strike to TE Todd Heap.

If we don't take a top-flight corner or safety in the upcoming draft, this team is going to remain a cellar dweller for years to come.  There is no reason that WR Yamon Figurs should have been allowed to haul in his second career reception (yes, that was only the second catch of his career - first of this season) for a 43 yard touchdown.  None.  Ninguno.

Running Game Ground to a Halt

I understand that Baltimore is as solid as they come defensively.  I get that.  What I don't understand is how we start the game with three consecutive passing plays and a punt.  RB Ahman Green ran well when he was handed the ball (4.8 ypc), but for whatever reason, they only gave him four shots.  I know we got down early, but I think that could be directly related to abandoning the run midway through the second quarter.

Battle Red Blog favorite RB Steve Slaton had his most forgettable game ever as a Texan.  In his four carries, he was only able to muster seven yards (1.8 ypc).  Take away Sage's 15 yard scramble and 3rd string RB Ryan Moats' five garbage time carries in the fourth quarter, and the Texans would be looking at a pathetic 29 yards on the ground. Twenty-nine.  Veinte y nueve. Puro basura.

The Texans asked Sage to win the game with his arm from the outset and he failed - miserably. 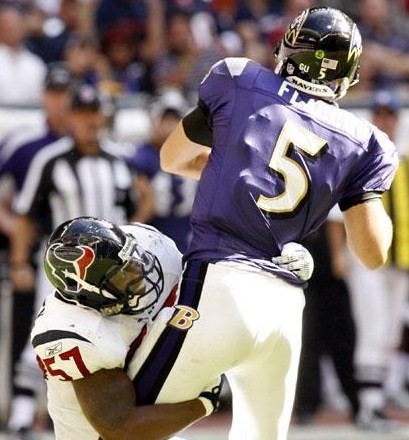 LB Kevin Bentley got the starting nod in place of injured LB Zac Diles.  He played a smart game, racking up seven tackles, two for loss, with one quarterback hurry, and a monstrous sack. Bentely is a veteran with the ability to step up and be a starting linebacker in this league.  And although Zac was leading the team in tackles before breaking his leg (during half speed running drills - how the hell does that even happen?), I don't expect there to be a drop off with LVJ filling in for him.

Rookie LB Xavier Adibi finally saw meaningful action this Sunday.  While he didn't see a lot of playing time, he still made the most of his limited duty.  Adibi was in on three tackles, two of which were for a loss.  His first tackle of the day was a thing of beauty as he brought down RB Ray Rice in the backfield.  He showed a nose for the ball and the ability to bring down the ball carrier.  Let's hope he can make a Diles-like leap to get him in position for next year.

Speaking of linebackers, DeMeco played the most DeMeco-like game I've seen in over a month.  While he didn't intercept a pass or notch a sack, he did have eleven solo tackles.  Let's hope that is a sign of things to come.

Were it not for a holding penalty that brought back Steve Slaton's would-be 58 yard touchdown reception, I could have been convinced that TE Owen Daniels was not on the field yesterday.   How is it possible to see your Pro Bowl caliber TE go for 133 yards on 11 receptions last week and only get one ball in the first quarter and none the rest of the game. He's a huge target with hands of glue.  Get him the damn ball.

Owen Daniels needs to be a big part of this offense, especially with Sage under center.  Keeping linebackers and safeties honest is what makes him such a valuable part of the Texans offense attack.  For his biggest impact to come on a holding penalty is effing inexcusable.

If you thought that last year's infamous botched punt in San Diego was as bad as it gets, you had something coming to you in 2008. Between the Rosencopter and countless red zone turnovers - the Texans continue to find new ways to embarrass their fan base.  Yesterday was no different.

On a first and goal from the one yard line, Sage throws a pass that is batted up and intercepted by the Ravens NT Haloti Ngata.  I would rather have the Texans unsuccessfully run the ball four times in a row than see Sage have to make an accurate pass in that situation.  Game film shows that he had what appeared to be an open Owen Daniels in the endzone, but its all for naught when you allow a 350 lb lineman to pick off your pass.

The game would have taken on a completely different feel, as it would have been 7 - 7 at that point.  But as is becoming the norm, Sage began to crumble when the pressure of carrying the team began to weigh on him.  Truth be told, Sage never looked comfortable, sailing nearly all his throws high and or out of the reach of his receiver.  From what I remember he threw three balls on target - one to WR Kevin Walter on his 60 yard catch-and-run TD, and two to Ravens LB Ray Lewis.  Apparently Sage takes the term "holiday giving" to the extreme.  Both passes that were picked off by Ray Lewis hit him square between the numbers.

It all begs the question: Where is the Sage of last year - the dependable game manager who earned the trust of teammates and fans alike?  Where is that vaunted backup that the Texans thought so highly of last year?  The Sage that the Texans refused to trade for anything less than a second round pick?   He left the team sometime during the fourth quarter of the Colts game and has yet to return.

If the Texans are going to make an attempt at getting to .500, the Sage that we all got to know and like last year needs to come back and lead this team up and down the field.  The Texans defense isn't going to do the offense any favors, so it's up to him to play mistake-free football.

Now where did I put that bleach...?