With two of the NFL's most potent offenses squaring off, it was all but certain that last Sunday's game would have its share of fireworks.  With both teams dug in, the game a Lucas Oil Staduim was a steady shootout.  Each team fired on target, seemingly at will.   As time was running out, and the Colts dead in their sights, the Texans' last shot misfired - leaving them to be done in by the Colts' Bullitt. 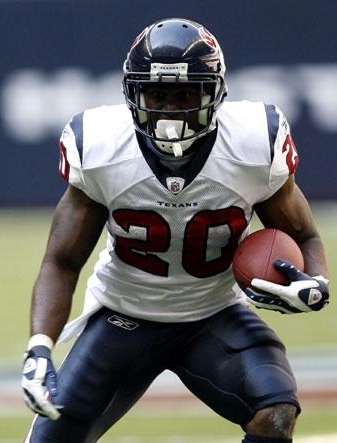 Last week, Steve Slaton easily had the worst game of his professional career.  Against the Ravens, Slaton rushed for seven (7) yards on four (4) carries.  To say that he had a bounce-back game in Indy would be a bit of an understatement.

Sunday, Steve carried the rock 14 times for 156 yards.  The crowning jewel of his performance was a spectacular 71 yard touchdown run on the Texans' first possession of the third quarter.  True, his 11.1 yards per carry average was a byproduct of his long touchdown run, but that's not to say that all of his productivity came on that one run.  If you were to take away that play, Steve would have still had 85 yards on 13 carries for an outstanding 6.5 yards per carry day.

Going forward, I would like the Texans to find a complimentary back to go with Steve Slaton.  The Texans could benefit greatly from having a downhill runner who could soften up the defense.  A fresh Steve Slaton plus an opponent's worn-down front seven equals more 70 yard dashes to pay dirt.

TE Owen Daniels was again a non-factor (1 catch - 14 yards).  If last week was an Amber Alert for the Texans' pass-catching tight end, then this week he belongs on the milk carton.  I cannot emphasize enough the importance of Owen Daniels to our offense.  Owen Daniels is a chain mover.  He makes the tough grabs and unlike last year, has been able to secure the ball all the way to the ground.  For him to only catch the ball once is an outright travesty of Kubiak's offense.

Someone needs to remind Sage that he is one of the best safety valves in the NFL.  Use him.

From an abhorrent ten (10) penalties versus the Ravens, the Texans returned to form with only three (3) against the Colts.  If nothing else can be said, then I'll say this:  Watching a game with less than ten penalties was a lot better than watching one where the total number was pushing twenty.

The crew, led by referee Carl Cheffers, averages roughly eleven (11) penalties a game, which is in tune with the league average for this year.  They called nine (9) total on Sunday.  Go figure.

After averaging a paltry 69.2 rushing yards a game, Colts running backs Joseph Addai and Dominic Rhodes bullied their way down the field for 158 yards.  Coming into the game, the Colts' average yards per carry was a pathetic 3.3 yards.  On Sunday, Addai and Rhodes each ran for 4.8 yards per carry - unacceptable.

Giving up over 150 rushing yards to a team that was averaging less than half that is un-ac-cept-a-ble.  The defense is sinking this ship, and there's not enough buckets to clear the bilge.

Injuries to linebackers Morlon Greenwood and Zac Diles opened the door for rookie linebacker Xavier Adibi to get the first start of his career.  Last week, Adibi got his first real taste of live game action and played very well (3 tackles / 2 for loss).

This week, the X-Man burst on the scene with 14 total tackles - including a ridiculous 13 solo tackles.  And when he wasn't making tackles, he was near the play.  His knack for finding the ball appears to be purely instinctual.  Technique and familiarity with his teammates will come in time, but his nose for the ball is something that is already there.  If he continues to get extended minutes, I have a hunch Texans fans will be treated to a pick six sometime this season.

If LB DeMeco Ryans is the gold standard for Texans linebackers, then it must be noted that in his first start Ryans had 13 total tackles with 12 solo.  By that comparison, one can say that Adibi had a very DeMeco-like day.  Way to go rook - keep it up.

With Morlon Greenwood's rapid decline and injury, there is no doubt that LB Xavier Adibi should be the man for the foreseeable future.  With six games left, Adibi will undoubtedly get his extended audition for the 2009 season.

Resigned to our fate.  That's our season.  Write it off.  It's in the books.