Sunday's match-up with the Browns will feature a familiar sight for Texans fans; CB Dunta Robinson will slide back into the starting line-up.  Playing primarily nickel back since the Detroit Lions game, D-Rob will resume his duties at the right cornerback slot.

Robinson is ready to prove to everybody that he's ready to be the player that was he was before he suffered a near career ending knee injury.

Dunta Robinson went from the tenth overall draft pick in 2004 to an immediate fan favorite for is ability to play both the pass and the run. Despite his 5'10" 185 lb frame, Dunta is one of the biggest hitters on the team. It's that reckless abandon that earned him the reputation of being one of the fiercest competitors in the league. 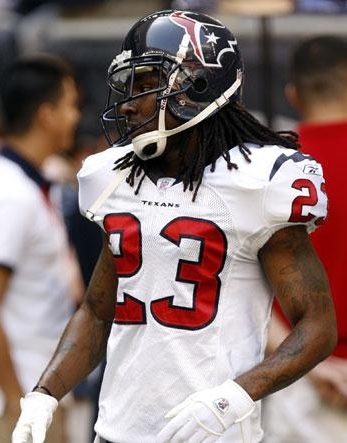 "People want to see me line up outside and they want to see me take away receivers the way that I've done in the past. I'm excited about it. I've played a little bit outside, but now here's my chance to show everybody, to show the Texans that I'm still that number one corner."

In the final year of his contract, these next six games will be extremely critical for both Robinson and the Texans franchise.   For Robinson, he will be doing his damnedest to show the Texans that he can return to form and be an asset on defense.  As for the Texans, they will be evaluating his progress to ensure that he won't be a liability in coverage.  Either way, both parties are looking forward to the evaluation.

"Let's face it, this six weeks is important to him and where he's at in his career," said Kubiak. "He feels like he's ready to go back out there and do the things he's done before. So, I'm ready to see him do it."

Like Kubiak, Dunta Robinson wants to see himself do it too.

If there is one thing Dunta Robinson is sure of, it's that he wants to finish his career as a "Houstonian".

"This is the team that gave me a chance so finishing with the Texans - I don't want to finish my career with any other team. So, hopefully everything will work out for the best and hopefully I'll be here."

Dunta Robinson isn't the only Texan auditioning for the future.  From here on out there will be an open completion that will include veteran cornerbacks Fred Bennett and Jacques Reeves.  Fred Bennett, a second year player, is looking to regain the swagger he showed in his rookie season when he led the team in interceptions, while Jacques Reeves is trying his best to justify his five year, 20 million dollar contract.

With the secondary drawing the ire of fans for repeatedly surrendering big plays, Kubiak is also looking to give rookie cornerback Antwaun Molden an opportunity to play in the secondary.

"Reeves and Bennett are competing on a day-to-day basis. OK? We'll see where Dunta's at after tomorrow and (CB Antwaun) Molden will play. He'll play outside for the most part. He also learns the nickel position but his reps should come outside this week."

The Texans secondary is in a state of despair, giving up a near league-worst 17 passing touchdowns.   Being that the right corner back position is Robinson's preferred position, there is a glimmer of hope that his return can help the struggling defense keep opponents out of the end zone.  While it's not likely, a chance to catch a glimpse of a secondary featuring Robinson and Molden could make for an interesting day for Texans fans.