WR Kevin Walter is arguably the best unheralded wide receiver in the league.  He runs exact routes and has excellent hands.  Through the first thirteen games of the season, Walter has 851 yards and is among the league leaders in touchdowns (8).  Of the 31 players with at least 55 receptions, only Roddy White (ATL), Greg Jennings (GB), Steve Smith (CAR), and Calvin Johnson (DET) are averaging more yards per catch. 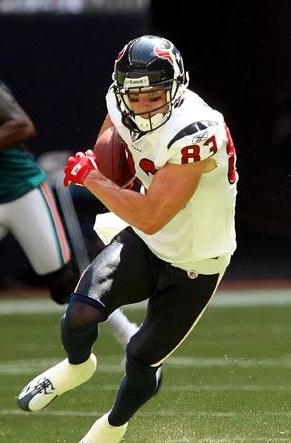 Houston's K-Dub is hauling in yardage at 15.5 yards a catch and at 65.5 yards a game, he is on pace for the first thousand yard season of his career.  If he's able to gain 149 yards through the next three games, he will join WR Andre Johnson to give the Texans the first pair of 1,000 yard receivers in franchise history.

Sunday at Lambeau Field, Kevin Walter had one of the best days of his career, hauling in six passes for 146 yards and a touchdown.   As consistently good as Kevin Walter is, Sunday was his first hundred yard game of the season.  What's even more mind boggling, it was only the second 100+ yard receiving game of his career.   His first game surpassing the century mark was an eleven (11) reception, 160 yard game at Jacksonville last year.

But it's not just his ability to catch the ball that makes him special.  Kevin Walter is also an outstanding blocker in the run game.  In today's era of prima donna wide receivers, Walter's selflessness has been key in the Texans offensive success.

"He’s (WR Kevin Walter) a special player. He plays hard in the running game. He seems to make big plays for our team all the time, very unselfish player. For us to get him for a seventh round draft choice a couple of years ago has been just a tremendous steal. I’m really looking forward to his future. I don’t think he’s scratched the surface. I think he’s going to be a fine, fine player for a long time. He takes care of himself. The game is very important to him. People can count on him."

As defenses continue to roll coverage to WR Andre Johnson's side of the field, one thing is certain - Kevin Walter will find holes in the defense and help move the Texans down the field.  Throw in his ability to seal off defenders down field in the run game, and you have one of the most complete complementary receivers in the league.  I fully expect to remain a threat as long as he's sporting the Battle Red, Liberty White and Deep Steel Blue.  Special K indeed.