Did Slaton Hit the Rookie Wall?

Share All sharing options for: Did Slaton Hit the Rookie Wall?

I know, I know... One subpar game by your standout rookie doesn't necessarily mean that he's hit the proverbial wall - but after last Sunday's performance, one has to wonder if he was really ready for the game in Oakland.  With Slaton shouldering the load for all but a handful of plays this season, I was left wondering if he has anything left in the tank for Sunday's season finale.

As they say, "facts is facts".  Heading into the game against Oakland, it could have been easily assumed (better yet, guaranteed) that Steve Slaton would run wild on the Raiders.   Coming into the game, the Raiders run defense was in a virtual tie for last place with the winless Detroit Lions (167 vs. 168 ypg ), while the streaking Texans, winners of four straight, were paced by Slaton's remarkable thousand yard season.  Averaging 4.9 yards per carry, and among the league leaders in all purpose yards, it was a foregone conclusion that Slaton would have a field day in Oakland.  But that's the funny thing about assumptions...

Now, Slaton didn't have a terrible day (66 yards on 18 attempts), but when you're arguably the league's hottest rusher, it's obvious when you don't perform up your abilities.  And Sunday, it was painfully obvious that Slaton struggled to get his legs under him.  Of his 18 attempts, 11 went for 2 yards or less - ELEVEN.  So it begs the question - what happened? 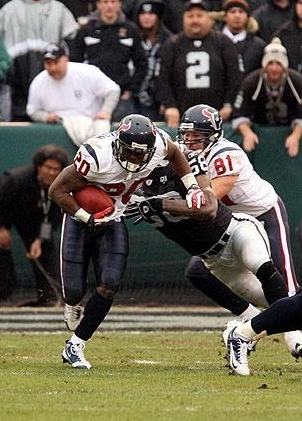 Was it the pounding he took against the Titans last week?  It was well documented that they were intent on keeping Slaton at bay.  Prior to their December 7th meeting, Titans' defensive captain Keith Bulluck said, "I don't think it sits too well that (Slaton) got that 100 (in the first meeting).  We need to get some of those yards back."  Titans' linebacker Stephen Tulloch said, "Chris Johnson deserves (rookie of the year).  If that means shutting this guy down, which we plan on doing, then that's what we'll do."  Despite their best efforts, Slaton was again able to hit triple digits against the Titans in his gutsiest performance to date.

Was it the culmination of averaging 23 attempts per game over the past four games?  Heading into last Sunday's game, Slaton had seen his carries per game increase a full 60%.  Prior to week twelve in Cleveland, Slaton had been averaging just under 14 attempts per game (13.8).   It's easy to see how that sharp spike in carries could affect even the toughest of rookie rushers.

Was it the season-long effects of playing four of the five top run defenses in the NFL?  When talking about Slaton's accomplishments, what often gets overlooked is the competition he's faced in his rookie season.  Sure, he's seen his fair share of tomato cans (read: Lions/Bengals), but he's also seen four of the NFL's top run defenses.  In order of total rushing yards allowed:  1st Vikings,  2nd Steelers, 3rd Ravens, and 5th Titans( x 2).  The only team that's missing from that list is the Chicago Bears at 4th best... and they are coming to town this Sunday.   That's a tall order for any running back, especially one in his rookie season.

I'm convinced that all of these factors contributed at least in part to Slaton's downturn last Sunday.  With the Texans hosting the Chicago Bears this week, Slaton is going to have his work cut out for him.  But if there is one thing Slaton has hung is hat on this season it's this: he never gives up on the play, and keeps the legs churning .

If I were a betting man, it would be hard for me to count him out.  I have a feeling that whatever he has left in the tank, he's going to leave it all on the field this Sunday at Reliant.