Share All sharing options for: Dominique Barber: Making the Cut

Now, truth be told, Miligan and Bethea serve their teams in totally different ways. Miligan is a hard-hitting gunner on special teams who thrives in the open field. He is regarded as one of the best special teams players in the NFL. Bethea, on the other hand, went from a small school prospect to big time player seemingly over night. He’s been a two-year starter for the Indianapolis Colts, who have had one of stingiest pass defenses in the league.

While most late round picks don’t end up becoming Pro Bowlers, Miligan and Bethea are two examples of what kind of talent can be found in the sixth round. So with that in mind, let’s take a look and see if Dominique Barber has what it takes to be an impact player for the Houston Texans.

Yes, it’s true; Dominique Barber is the younger brother of Dallas Cowboy’s running back, Marion Barber III. They were both born into the National Football League, as their father is former New York Jets running back, and seven year pro, Marion Barber Jr.. It was this pedigree that played a role in the Texans selecting Dominique Barber with the 173rd pick in the 2008 NFL draft. Texans GM Rick Smith made the following remarks regarding Dominique’s connection to the NFL:

"With (Dominique) Barber we feel like we have a player with a great bloodline. His dad played with the (New York) Jets; his brother now plays with Dallas. When you get into these kinds of rounds and you are going through and trying to decide who you are going to pick - a lot of things are good here, but it depends on who has a chance to really compete and try to make your football team at this stage. We think because of his bloodline with his dad and also with his brother that this guy will come in here and give everything he’s got because it’s in his family genes to make this football team.

Bloodlines aside, Dominique certainly played well enough at the University of Minnesota to warrant a second day selection in the 2008 NFL Draft. A two-year starter, Barber was one of the lone bright spots on an otherwise lackluster Gopher defense. Without much in the way of help, he was often counted on to make the stops from his safety position. A sure tackler with a nose for the ball, Barber compiled some rock solid numbers. 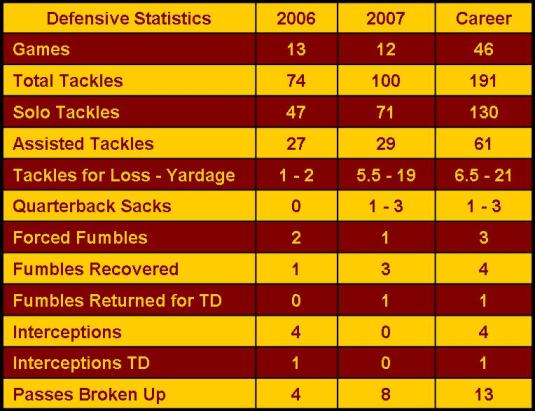 In his final two seasons, he was credited with 174 total tackles, with three forced fumbles, and four fumble recoveries.  He also picked off four passes and scored two touchdowns off of turnovers.

So as you can see, as a defensive back he was a tackling machine. It’s that kind of hitting prowess that could earn him a spot on the special teams. Barber on his ability to play special teams, as quoted in the Star Tribune:

"People know me as a safety, but I played special teams for four years at Minnesota. I look forward to doing that. I think it will help me to be able to play in so many different situations."

Even before the draft, Barber had already "hit it off" with Texans defensive backs coach Jon Hoke at the Combine, and according to GM Rick Smith, Barber was one of the players that assistant coach Ray Rhodes had kept his eye on:

What (Ray Rhodes) is doing in the draft is he is evaluating the safeties. We gave him that (job) and Barber is one of his guys that he stood up on the table for today. He thought he had a bright future."

Dominique Barber has an NFL pedigree, an ability to bring down the ball carrier, and a ringing endorsement from the Texans defensive coaching staff. Now he’s got a sibling rivalry that just turned intrastate.

So while it’s true that Bethea and Milligan are a couple of examples of what a kind of impact a sixth round safety can have, Barber won’t have to look very far to find another sixth round success story - C.C. Brown. Brown has been a three-year starter for the Texans, playing at both safety positions. While not a superstar, there is no arguing that Brown has posted solid numbers as a starter. Now Brown and Barber are competing for playing time in a crowded backfield as there are currently eight safeties listed on the roster.

It's inevitable: cuts are coming.

Despite all the competition, Barber relishes the opportunity to make his own way in the NFL.

"It’s about what we do with our opportunities, and taking advantage of the opportunity when it comes - don’t worry about anything, just go out there and play the game that you can play."

Barber seems calm yet enthusiastic, focused yet carefree. He’s seen the rigors of the NFL firsthand and seems ready to make his own mark. Only time will tell if Dominique Barber can be the next sixth round success story. I for one am pulling for him to make the cut.