Texans: Swinging for the Fences

Share All sharing options for: Texans: Swinging for the Fences

In the name of charity and goodwill, the Texans took time to visit the Astros at Minute Maid Park for a round of batting practice. In the now sixth annual Reliant Energy Home Run Derby, the Texans hacked their way to the biggest donation to date, with proceeds going to the Boys and Girls Club of Greater Houston.  The ten Texan players who made the ten mile trek from Reliant Park to Minute Maid were Matt Schaub, Sage Rosenfels, Mario Williams, DeMeco Ryans, Eric Winston, Kris Brown, Mark Bruener, Owen Daniels, Bryan Pittman, and Chester Pitts.

In years past, the Texans have had a hard time being two sport athletes. Last year there was a definite lack of power at Reliant’s annual event. With home runs being worth $250, and the Texans struggling to clear the fences, the total contribution was looking rather slim. Thanks to then rookie sensation Hunter Pence adding six home runs, they were able to raise a combined $2,750.

This year, the organizers of the event decided to change the rules to help the football players be more, um, charitable. Home runs were now given a $500 value, with $250 for balls hit to the wall. Even warning track shots ($100) and base knocks ($50) were added to the donation tally. 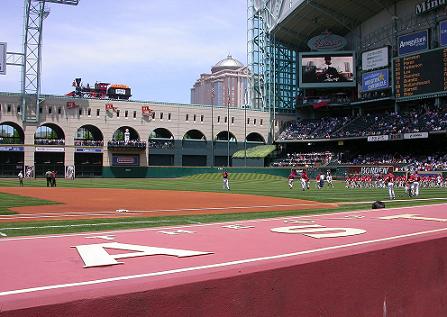 Matt Schaub was thrilled with the new format:

"It was a lot of fun. We want to keep doing this thing for a while. Now that the rules are a little different and you can still score by hitting a base hit, you don't have to worry about trying to over-swing at every pitch to try to get a home run."

The two quarterbacks, Sage Rosenfels and Matt Schaub, went yard a combined nine times and with their other knocks, raised a grand total $9,450. Sage had the highest reported home run total with five.

Joining the quarterbacks in the hit parade was right tackle Eric Winston. According to Krysten Oliphant’s mlb.com article, Winston’s display of power was so impressive that three of his four home runs were awarded $1000 a piece, bringing his total to a whopping $9,250. His towering shots even drew praises from the Astros who were in attendance.

The two defensive representatives, Mario Williams and DeMeco Ryans, didn’t fare as well as their counterparts on offense, but were still able to knock the ball around enough for a $2,800 contribution. DeMeco Ryans ($1,600 & 1 HR) spoke about his love of baseball:

"I loved playing baseball when I was growing up, since kindergarten, when I first started. It was my first love, baseball, and it's always good to come out and help the kids."

The press release for the event also said that the Astros vs Brewers game would also help add to the donation totals. $500 will be given for every Astros' home run, with an additional $100 going for every strikeout thrown by an Astros pitcher. Let’s go 'Stros!

In total, the Texans were able to raise $30,800, increasing last year’s total over tenfold. It’s good to see some of the biggest names on the Texans roster get out there for a good cause. With several children in attendance, I’m sure they were will take with them indelible memories of their hometown superstars chipping in for charity.

Couple Wednesday's event with the Texans organization's participation in last month’s Impact A Hero 5K Run, and you can see why this team has such loyal fans. It speaks volumes about how much this team "gets it."

UPDATE: Check out Nick Scurfield's houstontexans. com coverage of the event here.  Many more interesting quotes from the Texans and Astros players alike.  Also, take time to scroll through the pictures of the event - well worth the look.