TORO: A Call to Arms!

Share All sharing options for: TORO: A Call to Arms! 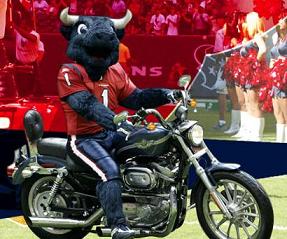 Or horns if you will.

CBS Sportsline is in search of the Fiercest Mascot in the NFL. In a single elimination tournament, two mascots are pitted against each other in a battle of ferocity. The winner is determined by vote totals.

In the first round, the mighty Toro trampled Blue, the baby Colt, in a landslide victory. With 80% of the over 8,000 votes, Toro was the clear winner.

Round two is proving to be a bit more arduous. In this round of the mascot battle, Toro drew the Bill's Billy Buffalo, who took out the Bengal's Who Dey. Fueled by the plight of their respective fan bases, both mascots are barreling into each other with tremendous force.

Giving up two feet and a couple hundred pounds has put Toro at a disadvantage as he is trailing the ta tonka (43% to 57%). The voting is set to conclude Tuesday, June 17th. Although Toro is down he is not out. There is still time to vote.

So get your friends, neighbors, and their friends and neighbors to go to CBS Sportsline.com and help Toro advance to the third round of competition. It's time to circle the wagons and get behind the beloved Texans mascot!