Tuesday wrapped up Day Five of Houston Texans training camp. Again, temperatures in Houston reached well into the mid 90s. Sweltering heat aside, the Texans continued to focus on improving individually as they work towards building the best team in franchise history.

Texans on the Mend 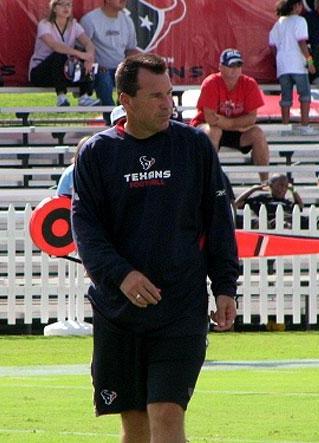 CB DeMarcus Faggins sat out another practice with hamstring issues. CB Jamar Fletcher and rookie CB Antwaun Molden are picking up his reps. Kubiak called it "a very competitive situation".

G Fred Weary was also held out of practice with a troublesome hamstring. Training camp has been the first action of the offseason for Weary, who did not participate in OTAs. He was still recovering from the broken leg he suffered in the December 2nd game against the Titans.

Gary Kubiak said," Fred’s kind of going through, basically, his offseason in a lot of ways because he’s behind the team from a physical standpoint. So we just took him out of there this morning. We’ll continue to be smart with him when he practices. He practices in the morning."

WR Jacoby Jones and T Scott Jackson both sat out with foot problems. While Kubiak noted that Jackson’s recovery could be a ways off, he seemed optimistic about Jacoby’s prognosis saying, "… (Jacoby) checked out OK. We’re going to be day-to-day and we’re going to get him right." Kubiak also added that Jones’ absence gives the coaches an opportunity to take a closer look at some of the younger receivers.

RB Chris Brown hasn’t done much during training camp to shake his reputation for being injury-prone. As Brooke Bentley noted, this is the sixth practice that Brown has missed due to back spasms. Gary Kubiak wouldn’t commit to saying he was worried about the time that Brown has missed, but he did say he was concerned. "You’ve got four backs going, guys really working hard. He needs to get on the field and catch up with football team, but we’ve got to deal with the issues."

I have a feeling that if Chris Brown doesn’t resolve his "issues" that he will be a roster-size casualty.

When Alex Gibbs arrived in Houston, everyone knew he was going to bring a fiery style backed by his no-nonsense attitude. Despite Gibbs’ assertive demeanor, his players are enthused about his coaching style.

Not only does Chester Pitts love Alex Gibbs, apparently so does LT Ephraim Salaam. "I love Alex" said Salaam. "I’ve always said Alex will make you good or he’ll make you gone. That’s his favorite thing to say is getting good or get gone. And he definitely knows what he’s doing; he’s been doing this for a long time. He’s had some of the best offensive linemen, the best running backs the best offense in the league hands down year round, every year and you got to love it. I love it; I love it. Me being an older player, I can relate to him. I love him."

RT Eric Winston also appreciates Gibbs approach to coaching. In Eric’s words, it’s all about having fun. "Football is fun and it should be fun. It is not all pressure and you don’t have to be serious all the time. You can have fun while you’re working out here. I think that is what (Alex Gibbs) is really bringing too. With everything else he is bringing, I think he is bringing a sense of ‘Hey lets have some fun while we’re working. Let’s work hard but let’s have fun. Let’s not kill ourselves out here stressing out about things we can’t control. Let’s go out there, work hard, and get better, but at the same time let’s have some fun." Adding that taking stuff from Alex Gibbs is "… all in good fun and we’re having a lot of fun while we are doing it."

Yes. You read that right. He used the word "fun" eight (8) times. For an offensive lineman to use the word "fun" in the midst of summer two-a-days is an amazing testament to Eric Winston's attitude.

Rookie DT Frank Okam continues to learn the nuances of playing pro ball. According to his head coach, he’s been up and down, but he thinks Okam can contribute. "He’s pretty good, don’t get me wrong there, but there’s another level for Frank," Kubiak said. "We’ve got to keep pushing. We’re playing him at both spots, the nose and the three, so that may have something to do with some of the indecision that’s been going on. But he’s got a chance to help this team."

Okam, who helped anchor the line for the Texas Longhorns, is adjusting to his role in the NFL. "I’m fitting in pretty good," said Okam. "I’m playing both tackle positions. At the nose, you have to try to stop the run. At three-technique, you have to make plays. I’m used to trying to make plays and being on the field. So, just being out there and making sure I know what I’m doing and not messing up. That’s the most important thing as a rookie is knowing your playbook and executing it."

Okam continues to lean on the veterans for advice. "Really, watching Amobi (Okoye) and Mario (Williams), Travis (Johnson) has really been helping me a lot off the field and Jeff Zgonina, who’s been in the league forever, has been giving me a lot of tips," said Frank. "It’s the mental part of the game that’s different and the little tidbits of techniques that the wily veterans use to make themselves more successful than the younger guys. You can see the little subtle things they do that I’m trying to pick up on so I can put in my game and make myself better."

With the coaching staff pushing Frank to learn both the NT and DT (three-technique) positions, it’s apparent that they are getting him ready to be a part of the line’s rotation. Being a big body who can make plays allows him to be an effective part of the line, as well as provide valuable insurance should one of the starters go down.

From WR Kevin Walter, on the biggest difference he’s seen this year so far: "Confidence. I feel like we got a lot of playmakers. This year we’re executing better and we’re playing faster. This is our third year in the system under Coach Kubiak and I think everyone feels more comfortable and if you’re more comfortable you can go out there play like you’re hair is on fire."