Wednesday’s practice session came and went without much in the way of breaking news.  However, there was a report from the Houston Texans' own Brooke Bentley that said free agent running back Mike Bell would be paying the Texans a visit Thursday morning.

As Texans training camp marches along, a handful of players continue to nurse injuries while others are making a case for being a part of the 2008 starting lineup. 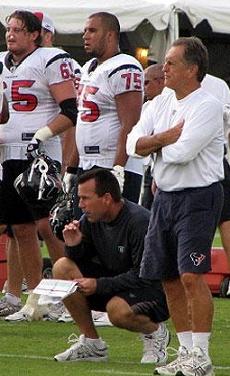 RB Chris Brown missed yet another day of practice.  Gary Kubiak said Brown was held out to "rest off" an injection he received to alleviate his back pain, adding that "…we’re probably looking at a few days if this injection goes good."

As questions about Brown’s durability arise, Kubiak seemed adamant about giving Chris Brown a chance to prove himself.

"I think a lot of Chris as a player and a person. It’s just unfortunate that this has happened, but we’re going to do everything we can to get him right," Kubiak said. "Am I disappointed he’s not on the field? Yes. I’m not disappointed in Chris. I just know he can help this team. We need him out here on the field to do that."

As Chris Brown continues to spend more time rehabbing his injuries and less time on the playing field, the reputation that preceded him is beginning to ring true.  Despite Kubiak’s vote of confidence, I’m sure he remembers the merry-go-round at running back he’s had to deal with over the past two seasons.  I have a feeling that if Chris Brown isn’t practicing by the Broncos game on August 9th, his days of sporting liberty white are all but over.

WR Kevin Walter is proving himself to be the consummate professional and his coach has taken notice.  Kubiak said, "He’s turned into a heck of a player. He’s a special worker. He’s a great kid and he’s managed in taking his skill and expertise - what he’s done is take it to a new level. Nothing would surprise me."

The comparisons between Kevin Walter and former Denver Bronco great ‘Easy’ Ed McCaffrey were often bandied about by the Texans' faithful after Walter’s outstanding 2007 campaign.   Wednesday, Kubiak went on record as making the very same correlation.

"We’ve got to have guys that go out there and dig out safeties and stuff in the run game." Said Kubiak,"He reminds me of a kid who played for me a long time, Ed McCaffrey. He reminds me of him a great deal. What happens to guys that people say they are lacking this or lacking that, they find a way to make up for it. Kevin (Walter), in his career, has become such a technician at what he does that if he’s lacking a tenth of a second here or there speed-wise, he’ll find a way to make it up."

Easy Ed comparisons aside, Kevin Walter proved his worth to the Texans last year by stepping up in a big way.  With Pro Bowl WR Andre Johnson sidelined for nearly half of the season with a knee injury, Kevin Walter caught 65 passes for 800 yards.

With another year in the starting lineup almost assured, Walter is poised to have another impact year.

Guard Making the Most of Opportunity

OG Mike Brisiel has been quietly biding his time on the practice squad since being signed as an undrafted free agent in 2006.When injuries sidelined RG Fred Weary and backup OL Chris White for the final four games in 2007,  Brisiel was called up and placed in the starting lineup.  By all accounts, he didn’t disappoint.  Heading into camp with the accolades from a job well done, he’s making a strong case to be a starter for the Texans in 2008.

Coach Kubiak said the following about the third year guard, "You talk about a guy who is having a heck of a camp. We’re starting to play (Brisiel) a little bit of center too just because we have to prepare for suiting seven guys on game day. He’s a player who got an opportunity, did a hell of a job when he got the opportunity, can’t get him off the field. He’s doing a heck of a job. I don’t need to go much further than that. He’s a good football player."

Texan Tackle Ready for the Next Step

CBS Sports’ Senior Writer Pete Prisco released his "Breakout 30", a list of 30 unheralded players who are ready to make their mark in the NFL.  Coming in at number 13 was fan favorite RT Eric Winston.

As I noted yesterday, Eric Winston is having plenty of fun during the rigors of NFL training camp.  His attitude and work ethic earned him some deserved compliments from his head coach.  Kubiak said, "He’s turned into a pro, busts his tail every day. Good kid, good technician, should play out there for a long, long time. He’s got a lot of respect around this league and I think the future is very bright for him, just like the type of guy he is out here day in and day out."

When asked about his recent recognition, Winston made the following comments: 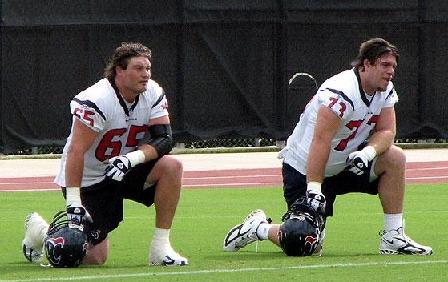 "I feel like I’ve been slowly improving. I feel like my first year here, I was kind of all over the place, and then when I got my chance, I made the most of it. Last year, I think I took a big sophomore step in proving myself and solidifying my spot and what I can do there. Now I’m really able to come out here and do something special.

Maybe not such a leader, but just a standard bearer for the offensive line and just give it everything I have every play and every game, practice. I try to lead by example and do things right. Try to set up a tradition here with the Texans with the offensive line play."

Andre Johnson on regaining confidence in his left knee:

"I definitely have confidence in what I can do. But I feel like I can still get better. I feel like I’m not where I want to be. Like I said, at times I still kind of baby my left leg when I’m running routes and things like that. The only thing that’s going to make that better is me doing more stuff out here on the field and it becomes more natural to me."