When the Texans Go Marching In

Share All sharing options for: When the Texans Go Marching In

After nearly a month of practicing in the stifling humidity of the Bayou City, the Texans are paying a visit to another city famous for its sweltering heat and boggy marshes.  The Texans made their way to the Big Easy and if all goes well, both teams should be in for a hard week of practice.

The Saints provide a different set of players for the Texans to practice against as they prepare for the regular season.  The Saints are also looking to hone their skills as they try and rebound from last season’s disappointing 7-9 season.

Camping in the Crescent City 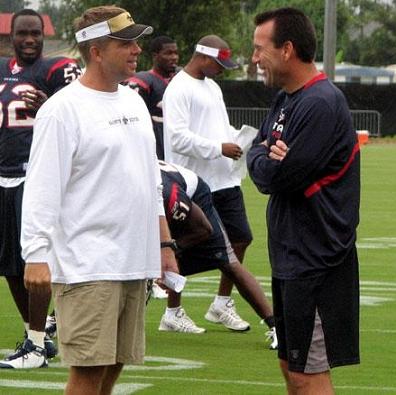 NFL training camps are in full swing, and teams are getting the itch to test themselves against a new set of opponents.  With starters typically limited to a small number of plays in the first preseason game, coaches are eager to see how their starters will do against another group of NFL first stringers.  Gary Kubiak spoke about his impressions:

"It’s really good to practice against somebody else. You see different defenses; they see different offenses. Just different things going on. I think you get almost a better look at your young players because it’s not against the same old guys everyday. So, we are really enjoying it."

When players are finally able to swap paint with different-colored helmets, its not uncommon to see tempers flare and a fight to breakout.  With the coaching staff reminding everyone about professionalism, its not surprising that the teams were able to keep from stirring up trouble.

LG Chester Pitts spoke about fighting on the practice field:

"It starts at the top. The discipline is instilled and we are professionals. I can’t figure that one out or understand that; I think that’s kind of ridiculous honestly. But we are all professionals and we are just out here trying to get better. It’s about a common respect for the men across from you. We’re at war and it’s football, but at the end of the day we are playing a game."

With Gary Kubiak responsible for keeping a watchful eye on his players, he emphasized the importance mutual respect plays when playing with another team. 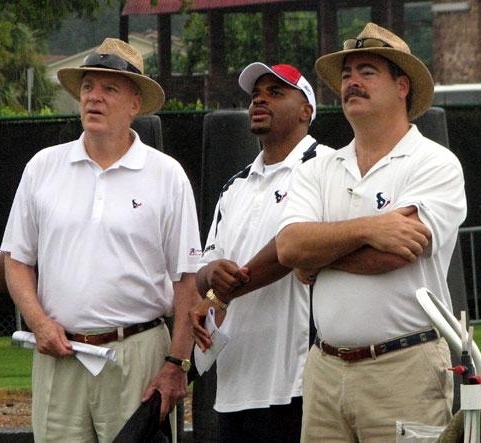 "New Orleans and Houston have so much in common, and so many people in Houston go to New Orleans to do business and people in New Orleans come to Houston on a regular basis" said McNair. "So, it is an opportunity to develop a rivalry that I think can be meaningful over time. I hope that we’ll play in preseason every year."

Bob McNair also understands that these two teams will be linked as long as the DE Mario Williams and RB Reggie Bush career comparisons rage on.

With the Bush Bowl well in the rear view mirror, McNair was asked if he could recall the moment the Texans decided to take Williams, and with the class and tact of an elder statesman, he said:

"I remember it well. What it came down to was as a team if you improve your offense by having Bush, are you a stronger team if you just put him out on the team. Do you have a better chance of winning with him on the Houston Texans or by improving your defense by taking Mario Williams?  Our coaches felt that we had a better chance to win by improving our defense and that even if we had a Bush, our offense would not be better than say Indianapolis. So, the way for us to win in our division was to strengthen our defense and that was the decision that was made."

With that decision making more and more sense as the teams continue to develop the players they drafted, McNair got down the brass tacks behind the team’s rationale, "How often do you see a physical specimen like (Mario Williams)?  He’s 6-6, 6-7, 290 pounds.  He can run and jump like a running back."

And as if to tell all the naysayers who questioned the decision to take Mario, McNair pointed out:

"He’s still learning. He’s still not at the top of his game.  He’s still getting better."

The Best is Yet to Come 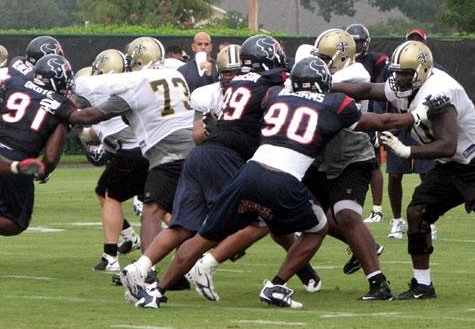 While many in the Texans fan base breathed a sigh of relief after Mario Williams' Pro-Bowl caliber performance last season, there was at least one person who wasn’t satisfied – Mr. Mario Williams.   When asked if he felt vindicated after last season’s breakout year, Mario frankly said, "No."

And improvement is what Mario Williams has been focused on.  Despite last year’s outstanding numbers, Mario has his mind set on doing even better heading into his third season.

Williams said,  "I realized that what I did before wasn’t good enough. I see it like that, and I want my teammates to see it the same way. We all push each other."

When asked what he did differently this offseason, Mario’s response was, "I worked harder."

From the initial rumblings out of the Texans camp, all indications are that Mario is set to have another stellar year.  With sacks being the "must have" stat for an end in a 4-3 defense, how many could Williams have by the end of the season?  Mario seems to think that "the sky’s the limit."

You are only dissatisfied whenever you look at the film and you know that you didn’t miss any of them, and that number could be tremendous. That’s the thing about football, the guys throughout the season, they don’t get them all. But if you can get them all or try to get as many as you can, the number can be outstanding."

LB DeMeco Ryans on what its going to take to make an impact in 2008:

"I think we can make a bigger statement by running the ball better on the offensive side. We were plagued with injuries last year. We stay healthy, run the ball well, and we play solid defense, create turnovers, and I think that’s going to improve our record a lot."