Share All sharing options for: Rick Smith: The Pact

For the past two years, Texans GM Rick Smith has proven to be a shrewd negotiator and an excellent judge of talent.  He was a part of the team that drafted impact rookies DT Amobi Okoye and CB Fred Bennett, as well as acquiring the talented veterans FS Will Demps and WR Andre Davis.

Saturday morning, Rick Smith was once again being applauded for brokering a fantastic deal.  The impact of this deal could rival that of any the general manager has made to date. 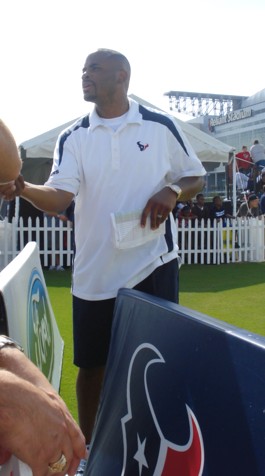 Under the morning’s clouded sky, a group of ardent Texans fans stood in the back of the end zone.  I, being one of them, was taking in the sights and sounds of the Texans training camp.

I watched as rookie RB Steve Slaton bounced runs to the outside and was pursued by draftmate LB Xavier Adibi.  One particular play saw WR Andre Johnson induce a crowd-rousing cheer as his double move to the sideline got him free for a spectacular catch.

Among those also impressed with Johnson’s catch was GM Rick Smith.  He stood there near the goal line, arms crossed, watching the action unfold.  With a big grin, Rick Smith looked back at our small crowd of diehard fans and (albeit for a brief second) joined us in cheering.

Then, something drew his focus. Rick Smith paused and made his way towards the crowd.  Intent on his target, he strode the ten yards with a keen look in his eye.  The object of his attention was a young boy named Donovan.

After a quick question and a nod, Rick Smith picked the boy up over the waist-high fence and took him onto the field.  There they stood on the sideline, two friends watching their favorite team.  Close enough to hear the calls of the offense and see the quickness in the defense, the boy looked in awe as the players collided after every snap.

After nearly fifteen minutes, and with camp soon to conclude, Rick Smith walked Donovan back to his parents.  After a handshake, he proceeded to share with Donovan’s parents, as well as everyone in earshot, portions of the conversation he had with their son.

He said they spoke about the amazing catch they had just seen and how much they liked the team.  Rick Smith said that he asked the boy if he had ever been to a game, and Donovan told him no. 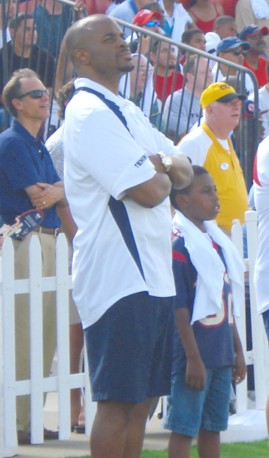 That’s when Rick Smith negotiated one of his finest contracts to date.

He told Donovan’s parents that he and their son made a "pact".  And the terms of their agreement where as follows: If Donovan did well in school, and his report card showed that he was making good grades, then Rick Smith would provide tickets so that they could bring Donovan to a game this season.

Again, Rick Smith added emphasis to the conditions of their agreement. Donovan knew he was going to be held accountable not only to his parents, but also to newfound friend Rick Smith.

The once talkative crowd was now entirely focused on Rick Smith as he smoothly delivered the particulars of the agreement.  Most were taken aback, staring in utter amazement at what had just taken place.  The small crowd, in appreciation for the gesture and acknowledgment of the moment, could do nothing more but stand back and applaud.

It was one of the classiest things I've ever seen.  There was something truly genuine about the moment, and considering there were no cameras or reporters in the area, it was an act of altruism at its finest.

They say that incentive-laden contracts are the best for ensuring the player performs to expectation.  Saturday morning, Rick Smith handed out a contract with a fantastic set of incentives and better yet, it has no bearing on the salary cap.

Although a set of game tickets is now Donovan’s goal, the real reward comes from learning that accolades are not given, but earned.

We're all rooting for you Donovan.  Get those tickets and enjoy the feeling of a job well done!