In the face of an impending hurricane, the Texans carried on with this week's practices with one thing on their minds - preparing for the Baltimore Ravens.  With last Sunday's debacle in rear view mirror, the Texans have only one goal, prove to everyone that they are better than their week one showing. 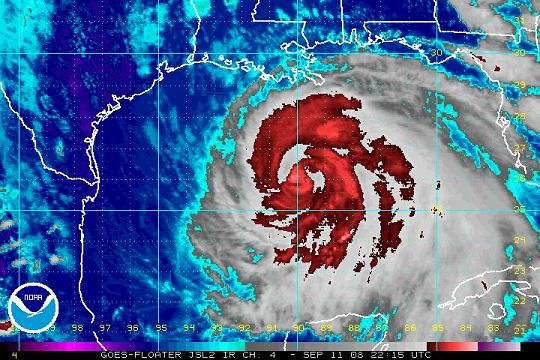 With the decision makers in the background making alternate plans, Thursday's forecast puts Ike on course to have a front row seat to Houston's home opener.

In a move designed to give everyone time to prepare for Hurricane Ike, the game between the Texans and Ravens has been moved to Monday.

Rest assured that head coach Gary Kubiak is preparing his team to play regardless of the conditions.  As for now, the plan in place is to soldier on until their orders change.

There's at least one Texans player who is preparing to play come hell or high water.  Florida native C Chris Myers spoke about the potential distractions heading into next Sunday's showdown with the Ravens.  Myers let it be known that he was getting ready for one thing, and it isn't a hurricane.

"Those are all just distractions. I was born and raised in Miami, so I'm used to all of those hurricane distractions. We've just got to go in there and practice day to day, and if something comes through, we'll work with it.

The excitement and anticipation for last week's showdown in the Steel City was all for naught after the performance that the Texans turned in.  They were thoroughly beaten in every facet of the game. 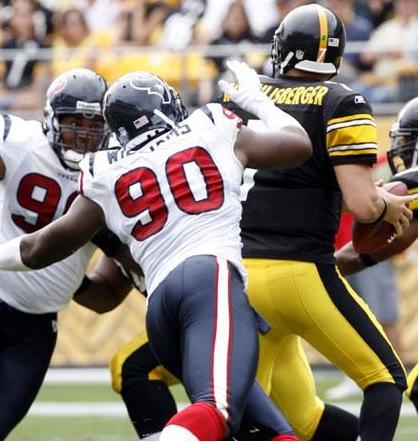 In his post game press conference, Kubiak told the media, "Normally in the course of the game, if one side of the ball is struggling, the other side of the ball picks it up. That didn't happen. We all struggled. We struggled as a football team, special teams included."

The Texans had three turnovers (four if you count the opening drive's failed 4th down conversion) that allowed Pittsburgh to rack up the points early and often.   Only one of the turnovers didn't result in points, and that was thanks in large part to DE Mario Williams' outstanding sack/forced fumble.

Williams' performance was among the few bright spots for the Texans.  The rest of the team has spent the past few days regrouping and trying to correct mistakes.  For quarterback Matt Schaub, next week's game can't come soon enough.

According to Schaub, the Texans terrible showing kept him up at night, and I'm sure he wasn't the only one tossing and turning.

However there was at least one player who didn't lose any sleep over the game, LB DeMeco Ryans:

No Rest for the Weary

If last Sunday's game gave any indication of the Texans ability to handle a 3-4 defense, then the Texans will have to be better prepared for this week's matchup.  Much like the Steelers, the Baltimore Ravens feature a 3-4 defense that is every bit as complex as Steelers'.  Gary Kubiak spoke about the Ravens vaunted defense: 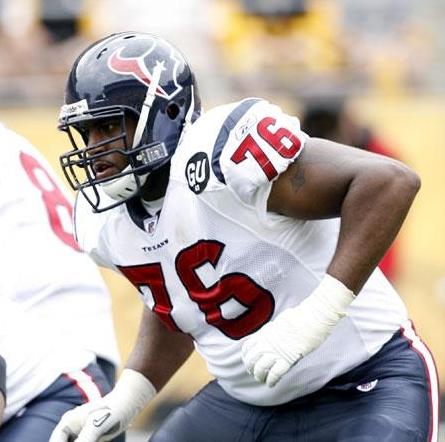 "You look at what (Baltimore) did to Cincinnati yesterday. They held them to, I think, 140 some yards and eight first downs. That doesn't happen in this league, and Cincinnati's had one of the better offenses in the game going on the last three to five years.

They were missing a lot of players last year. They're all back. They're all healthy. They are playing with a ton of confidence. Very, very physical team, so we have to get over this real quick and get ready to go."

Rookie tackle Duane Brown, having had his first taste of regular season action knows that his next opponent will be just as formidable as his last.

"(The Ravens) mix it up a lot. They go from a 4-3 to a 3-4 a lot. You just have to account for everybody and the speed that they play with. They have a relentless defense that gets after the ball and forces a lot of turnovers. You just have to be ready for anything with them."

With only a few days until the Ravens come calling, the Texans seemed to have stopped licking their wounds and are licking their chops.

Acknowledging the challenge that lies ahead, Chris Myers was very matter of fact when asked about Baltimore's defense.

"Top defense to top defense. The Steelers' were tough and (facing) Baltimore, it's another rough one. We have to go in there and prepare like we did, they have a similar defense to what the Steelers' had.. They have a lot of tough guys up front but our game plan is going to be pretty successful."

With the prospect of playing infront of a "less than capacity" crowd, the Texans will have to manufacture their own momentum on Monday night.  Here's hoping everyone weathers the storm without much heartache and that the Texans bring the first of many Ws to the win column.