Share All sharing options for: A Very Brief Introduction To The 4-3 Under Defense And Why It's A Good Fit For The Texans

Frank Bush has earned my respect. As Jake posted here , it is believed our Houston Texans will be running an aggressive 4-3 Under D. In my mind, this is the best defense for our current personnel to not only improve, but to be successful and consistently create turnovers and a pass rush. When you look at the defense, it will make our defensive holes obvious, but will also clarify a few offseason moves as well. 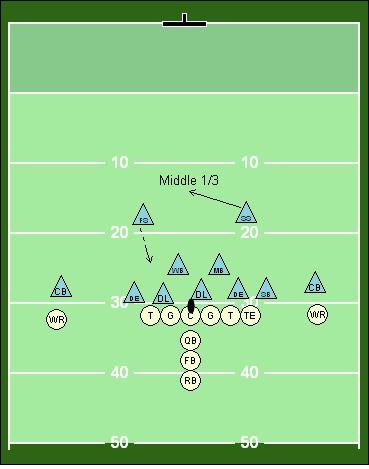 First, what are the advantages of the 4-3 Under? First and foremost, it allows you to place your playmakers in position to make plays. It produces a lot of one-on-one pass rushing matchups by alignment, and uses your DEs and SAM as primary contain. You can run cover 1, very easily, with your safety over the top having relatively simple reads. Your FS can walk down to man up on any slot receivers and not have to make any drastic changes. This defense favors run-stopping safeties, as they have to be able to play the alley should anyone break contain. Our corners will see a lot of 1-on-1 matchups playing bump and run. If they maintain good inside leverage, they will always have help over the top and should be able to pounce on bad throws forced by the pass rush. The MLB gets to force runs, playing 2 gaps and smashing the FB at the point of attack. Your WLB should be your fastest LB, being able to avoid most linemen as all 3 offensive linemen in front of him have a defensive lineman on them.

This is a typical 4-3 under lined up against a typical I formation. While we talk in more detail about the scheme, we will also examine the type of players necessary to facilitate good D.

4-3 Under is essentially running the weak side of the defensive line to the strong side, and walking down your SAM LB over the TE. It is a primarily run-stopping defense, with the added benefit of being (in my opinion) the best 4-3 defense to rush the passer with. In the diagram above, you see that the RDE and 3-technique tackle are both to the weak side. The NT is lined up in the 1-gap to the strong side, with the LDE in 5-gap, and the SAM on the outside edge of the TE, called the 9-technique. You have your Mike 'backer playing over the strong side 3-gap, and the WLB in the backside 1.

Typically, the 2 best players on your 4-3 under need to be your weak side DE and your SAM linebacker. Conveniently, we have Mario Williams as our uncovered DE and have newly selected Brian Cushing to play SAM. The uncovered DE in the 4-3 under needs to be an absolute beast, being able to take advantage of 1-on-1 matchups in all pass rushing situations while also being the primary contain on outside runs to the weak side. We have a DE who had double digit sacks while being triple teamed - now he is going to see 1-on-1 a lot unless teams are willing to run 2 TE sets all the time. That makes me very happy.

The number one reason why more teams don't run a 4-3 Under is the difficulty in finding a player good enough to play the SAM. He needs to be big, strong, fast, and able to cover or rush the passer at any given time. He lines up on the outside edge of the TE at all times, and harasses him off the line, never allowing a free release, staying underneath on routes because you have your safety over the top. He also gets one-on-one matchups on the outside to pass rush. I'll take Brian Cushing versus Dallas Clark, Bo Scaife, or Marcedes Lewis any day of the weak. He needs to be a great run defender as well, because he CANNOT be reached, or there is a huge running lane to the strong side.

When you have two great rushers on the outside like that, you force the defense to decide to either chip Mario or Cushing with a RB, leaving Mario 1-on-1 with a tackle, or Cushing 1-on-1 with a TE - either way, it's win for the Texans.

Inside the SAM, you need to have a powerful run-stopping LDE. Not coincidentally, we happened to acquire Antonio Smith, certified awesome-run stopping DE. He needs to be able to always occupy the strong side offensive tackle and not be reached or washed out by the strong side guard, who is left uncovered. He is going to catch a lot of single blocks from the RT, or trey blocks from the T and TE, with the FB trying to spill the SAM to open up the inside run. Adding Antonio Smith absolutely solidifies that position, frees up Cushing to wreck havoc, and makes running to the strong side an undesirable option.

Your weak side DT needs to be a premier pass rusher. Being positioned on the backside 3-gap with a DE right outside him makes it very difficult for the offense to double team him. A center-guard double team would require the guard to cross his face and leave the 1 technique in open space, while a guard-tackle double team would leave Mario Williams free. Both unfavorable. We happen to have Amobi Okoye manning the 3 technique spot in our D. A speedy pass rusher, Amobi's talents were completely wasted in a read-and-react defense. In this scheme, Amobi will not only be allowed, but be required, to beat the backside guard one-on-one to rush the passer and break up the run plays. Another great fit.

The 1 technique is vital to the success of this defense. We happen to not have any fully qualified 1 technique DT. In this scheme, the strong side DT needs to be very big and powerful, able to withstand constant double teams, as he is essentially occupying the center and strong side guard to keep the others free. Heard of anyone like that on the Texans' roster? Me neither. I think the coaching solution is to throw as many fresh bodies at that spot as possible. A 3 or 4 play rotation of TJ, Deljuan, and Okam might be the best solution, since we do not have a premier talent to occupy that space. It will be interesting to see how it is dealt with this season, but as of now is the primary weakness in our front 7.

Moving back to the Linebackers (SAM doesn't really count, as he plays on the line the vast majority of the time) we have our Middle Linebacker and Weakside Linebacker. The MLB primarily lines up 3-4 yards deep over the play side 3 technique, and his job is to shed that guard and make plays, crush FB isos, and scrape over the top to the play if its outside. In cover one, he will usually be manned up with the first back out to the TE side. DeMeco Ryans at this position is great, as it allows him to attack the line of scrimmage on run plays. His first step is always downhill, looking to blow someone up. If the back he is supposed to cover stays into block, he has the option of blitzing or of setting into a little mid-hook zone, to help deter drags, slants, and curls.

You weakside linebacker in the 4-3 under needs to be your fastest and best coverage linebacker, as he is protected by the defensive lineman in front of him and therefore must be able to get anywhere on the field pretty darn quick. He has control of the backside A (1) gap, and will either shoot the gap on inside runs or scrape over on outside runs. If the play is to his side, he is the primary pursuit to the outside as well. On coverage situations, he generally plays short middle and helps out where he needs to be. Adibi, due to his speed and coverage skills, is a great WLB for the 4-3 Under. He will be allowed to make more plays because he will be harassed significantly less by offensive lineman.

The secondary in the 4-3 Under is usually pretty simple. Coverage is almost always Cover 1 or Cover 3, with Cover 1 meaning man underneath except for the WLB and the strong side safety, and Cover 3 being deep thirds zone, split between the CBs and the strong side safety. Safeties in this defense usually need to be able to adjust pretty well to changing situations, and having safeties that can both play the run and provide solid zone coverage are invaluable. I have questions about our safeties' abilities to provide quality, consistent over-the-top support, or to feel comfortable in playing middle deep third alone, but time will tell. One thing to note is safeties usually play sides of the field and interchange responsibilities freely. However, I personally feel that it would be to our benefit to keep Eugene Wilson over the top, and to walk down Barber or Ferguson into the box. Again, we will see.

Corner play also tends to be simplified in the 4-3 Under. It tends to have simple reads and the base D tends to be Cover 1, Cover 3, or Cover 2 man under. Man coverage schemes tend to be preferred to take advantage of the pass rush. I feel Reeves and Bennett would both do well in a primarily man scheme, especially if the pass rush does its job.

Well folks, that is your introduction to the 4-3 Under. If time permits, I will examine some specific schemes and how the 4-3 Under reacts to different formations in the upcoming weeks. All you defensive gurus out there, read, and comment appropriately.