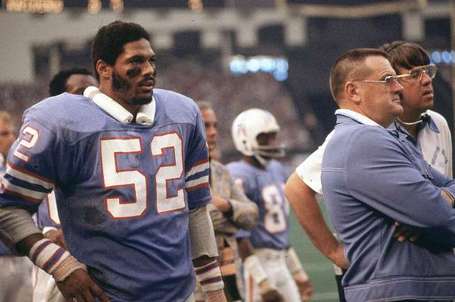 At my age, it's stupid to be a fan-boy.  But when it comes to two players, I make exceptions.  There's the Tyler Rose, Earl Campbell.  And then there's Robert Brazile (#52 above behind O.A. "Bum" Phillips [and I believe that's Billy "White Shoes" Johnson in the background]).

Over this past weekend, Derrick Thomas was inducted into the Football Hall of Fame.  Ten years earlier, Lawrence Taylor made his acceptance speech in Canton.  Bum implemented the 3-4, but it was Robert Brazile who helped evolve the 3-4 defense, paving the way for Thomas and Taylor.

Yet, Brazile isn't in the Hall of Fame.

Coldhardfootballfacts.com takes a look at him, and you can look at his Wikipedia entry, but what Robert Brazile did changed the game of football.  Suddenly, a huge OLB was rushing QBs with tremendous speed while still more than capably handling the run and pass when necessary.  Brazile played with a controlled passion bordering on vengeance like you'd just stolen his last beer.  Not only was he elite, but he was consistently elite, getting voted to seven Pro Bowls in his 10 seasons.  Perhaps it was his consistent greatness that leaves him short today.  Well, that and the lack of stats...

For you see, sacks were not counted by the NFL until 1982.  In '82, Brazile recorded 6.5 sacks in just nine games during that strike-shortened season.  During his last two years, Brazile, who never missed a game, could only garner 5 sacks combined.  By this time, Bum was gone, and the 3-4 defense under which Brazile thrived was long gone.  We never counted Brazile's best years, but it was his success in the 3-4 that blazed the way for 3-4 LBs today.

Robert Brazile is a Hall of Famer.

This is why I get so angry at Pancakes for his fellating of Satan Adams over the weekend.  Instead of telling us how awesome a petty thief is, how about using your blustery pulpit for touting the virtues of one of the game's all-time greats, Robert Brazile.

Today, Brazile is a Special Education teacher in Mobile, AL.  As if you needed another reason to like him.

Edit: I was remiss in forgetting to add two more factors:

2. But what made Brazile stand out, in my not so humble opinion, was his smarts.  LT and DT were both pin-the-ears-back regardless of the play-call and rush the passer kinds of guys, though they were both exceptional in that skill-set.  Brazile played the run and the pass in addition to terrorizing QBs.  Brazile was a complete player in every respect.