Share All sharing options for: 2009 in Review: Defensive Line

Hit the jump if you're familiar with the series because the next couple of lines are review.

I'm going to look at every player who played more than 100 snaps for the Texans from a number of different angles.  I'll give their regular statistics from this year and last year.  Similarly, I will bring in Pro Football Focus and Football Outsiders numbers for the last two years and compare them.  A glossary of FO terms can be found here, and Pro Football Focus operates on a strict +/- system.  Finally, I'll give my impressions on each of them as someone who has spent probably 100 hours each year watching the game tapes and filling in charting numbers for FO.  For players with less than 100 snaps, I'll just give a brief summary.  From this, I hope to give a balanced reading of each player's ability and relative value to the team.

While with the offensive line FO stats you have a clear-cut placement of credit, the defensive line stats are much more subjective.  The improvement in the Texans run defense, especially after Week 3, was obvious.  How much of that you want to put on the defensive line and how much of it you want to put on Brian Cushing and Bernard Pollard is the real question.  I think that the Texans' run defense improvement was a confluence of factors: Mario Williams became a more complete defensive end by improving against the run, Pollard was a huge upgrade over John Busing in containment, Cushing was a complete beast after some acclimation time, and while Antonio Smith was not a plus run defender, he was much better than the corpse that was Anthony Weaver.

Despite blitzing more often than Richard Smith with better pass rush personnel, defensive coordinator Frank Bush didn't get much improvement in pass pressure.  Some of this came from an abnormal amount of missed sacks, but the blitz schemes couldn't have been more transparent if Bush's microphone were directly linked to the opposing QB's helmet radio.  I charted somewhere in the neighborhood of 12-15 zone blitzes this year, and all but one or two of them were effective.  But instead of trying to cause confusion and havoc by using these more often, Bush all too often would send DeMeco Ryans or Cushing off the edge or up the middle and call it a day.  There have been enough words spilled over Bush's merits for one season, so I won't focus too hard on this for the time being, but if I had to come up with three question marks for next years Texans team, his playcalling would make that list. 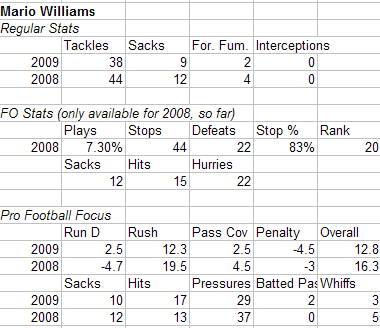 Texans fans often feel forced to justify Williams' existence, and while he did not have the usual number of sacks, he completely turned around the meme that he was poor in run support this year.  Despite being the target of popular big time announcers who enjoy big time plays by big time players, Williams showed more heart than any Texan on the entire team last year by suiting up and finding a way to be effective on one arm.  It's easy to focus the Williams talk on how good he is and how much better than Reggie Bust and Multiple Pro Bowler Vince Young he has been, but for nutting up this year while hurt, Williams should be lionized more for his pain threshold and leadership then for his raw talent.

Williams' burst off the line came and went this year, which is a good sign for his future success in my eyes, since the injury seems to coincide rather nicely with the effect.  Williams was good all over the line in run support, but he developed this nasty outside spin that ruined a few edge pitches, and I think that's where he does his best work.

Obviously, Williams is the franchise's best defensive player ever.  If he manages to get healthy and provide last year's run support with his previous levels of sackage, it could be an improvement that takes the pass rush to the next level all by itself.  Crappy play-calling be damned. 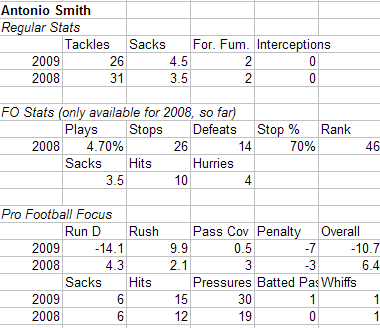 Smith is nowhere near as bad against the run as that PFF rating in my eyes.  He's not a positive influence, no, but he's not nearly -15 bad.  He might be a true talent 0 to -5 player against the run.  Another driving force on that -10.7 rating is the insane number of penalties he picked up this year.  Thankfully, compared to last year, that amount looks like it has some fluke in it.

Rushing the passer, Smith was a fine second banana to Williams.  His only problem was finishing his pressures; he probably had 4 or 5 separate plays where he got a hand on the QB while the ball was coming out.  He won't go out and dominate a Joe Thomas or anything, but against a normal second tackle, he'll have success.

Devil's Advocate: Given the relatively poor year, the fact that the Texans definitely overpaid to get him in the first place, the rather strong class of older defensive ends, and the fact that the Texans could cut him now with no salary cap ramifications if there is no CBA, one could make a case that it makes sense to cut Smith this offseason.  I'm not saying the Texans will do that, or probably even dream of doing it, it would just be an interesting use of market forces.  Particularly since Connor Barwin is in the fold anyway should things not work out. 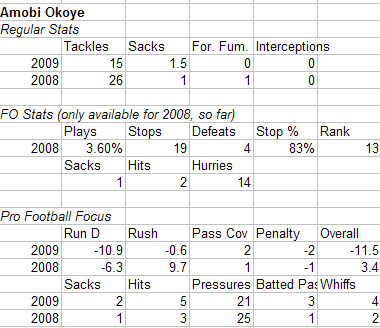 Here is your enigma.  The hardest player on the team to evaluate by far.  Unlike the Smith run defense rating, I don't think -10.9 is too far off on Okoye.  He'll occupy a blocker, but he doesn't often beat his man or cause a cascade with a great move.  On the other hand, I think he's about a +5 true talent pass rusher.  But the split on that has to be something like +15 against bad guards/centers and 0 against good ones.  To make a baseball comparison, saying Okoye is a good pass rusher is like saying Juan Pierre is a good hitter--he's above average, but there's a lot under the surface that makes that .300 look worse than it is.

The flashes and talent are always there with Okoye.  He can look absolutely dominant for a series, a quarter, even a half.  Then he can spend the next 15 plays adding absolutely nothing to the defense.  I advocate patience with him, because he is still incredibly young, but this is an enormous year for him.  Playing aside a nose tackle who demands a double team would be a good start for helping him out, but another thing that the Texans might want to look into is cutting his snaps.  He seems to tire easily subjectively, and I think it might be a nice wakeup call to say "Hey, we love you and all, but we want performance out there, not promise." 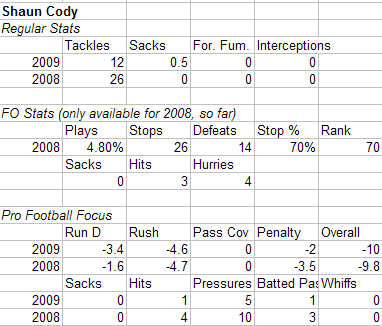 Well, that worked out just about like it was supposed to.  Cody was, as he has been for most of his career, just another guy.  He can occupy a blocker, but he's not often going to do anything to beat said blocker.  There is no untapped upside left, and while guys like him have a deserved place in the NFL, Cody is an injury-fill in on a good defense.

To turn around a King Of The Hill phrase, Shaun Cody is a great defensive tackle for housewives and little girls playing barbecue, but you can't compare him to a real NFL nose tackle.

Barwin's progression was pretty much what you'd expect for someone who'd played just one year of defensive end in college: downright ugly in the first couple of games, but he was a solid contributor from then on, albeit one who made some mental mistakes.  I don't think he's average against the run yet, but he's already the second best pass rusher of this lot.  Like most of the Texans rookies, expect Barwin to benefit from a full year of OTAs and training camp.

The long-term future is somewhat more up in the air.  I'm not sure the coaches will let him overtake Smith, and I'm also not sure he'll be able to stick at linebacker for more than a few gimmick sets.  He looked lost the few times I saw him have to play coverage.  I'm hoping he gets more snaps this year, but there isn't a clear answer to where they come as long as Smith is on the team.  Perhaps to run with my Okoye idea, the Texans can run some more sets with Smith kicked inside and Barwin at his end spot. 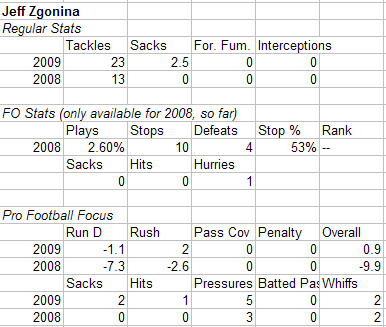 I have backspaced about a hundred clever ways to say "Jeff Zgonina is a nice guy, I'm sure, and he tries hard, but he's old and not that good at football anymore", some of which have involved poop jokes and the word "grit".  I have no objection to Zgonina being on the team or in training camp, but let's call his snaps what they really are: a cry for help.

The fact that a geriatric could put up a -1.1 run rating screams fluke at me from every angle.  He had some good fumble luck, including the one that sealed the win over the BESFs in Week 2.  I think he's a true talent -10 tackle, about on par with Cody. As much as I admire the story, I also admire having talented players on the defensive line. 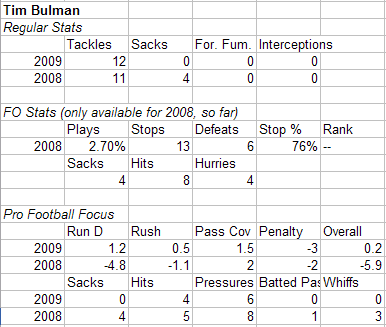 Bulman is the Chris White of the defensive line, and I don't mean to imply that he regularly soils himself by that.  He's a penalty-prone player who does a decent job on passing downs and is probably worth keeping around as a change of pace as long as he stays cheap.  At the same time, there isn't much upside here, and he's already nearing 30.

Bulman is never going to be much more than he is now, but when we here at BRB are listing defensive linemen from the old days in 2018, people will think about him and say "Yeah, I guess he was okay.  He was no Junior Ioane." 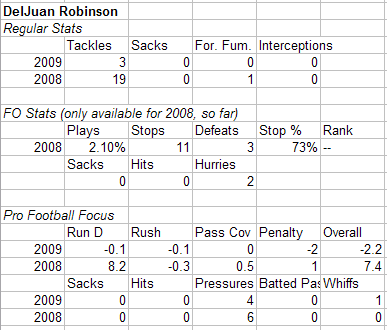 Sort of puzzling to see him buried on this line for Cody, given I don't think there is much of a difference between the two of them.  Robinson wasn't +8.2 against the run good in 2008, but he played decently in limited time.  I'm not quite sure that he's anything more than an average run stopper, so there will be no rebellion against the Kubiak regime for this mass injustice, but it was odd that he went so far into the doghouse.

At any rate, not the kind of nose tackle worth losing sleep over.  I think it's pretty neat that he managed to grade out as almost perfectly average on PFF, minus the penalties.

Tim Jamison - For whatever reason, I really like this guy.  I think he's got some Bulman in him.  All the small sample size stats say he's not worth much, but I must have caught the two or three plays where he got decent pass pressure.

Jesse Nading - Good news for him is that Darren McFadden's career is so far down the drain there's a possibility that he may yet get revenge on him in the UFL.

Frank Okam - Too busy wiping out global hunger to care about this "football" you speak of.