Hit the jump if you're familiar with the series because the next couple of lines are review.

I'm going to look at every player who played more than 100 snaps for the Texans from a number of different angles.  I'll give their regular statistics from this year and last year.  Similarly, I will bring in Pro Football Focus and Football Outsiders numbers for the last two years and compare them.  A glossary of FO terms can be found here, and Pro Football Focus operates on a strict +/- system.  Finally, I'll give my impressions on each of them as someone who has spent probably 100 hours each year watching the game tapes and filling in charting numbers for FO.  For players with less than 100 snaps, I'll just give a brief summary.  From this, I hope to give a balanced reading of each player's ability and relative value to the team. 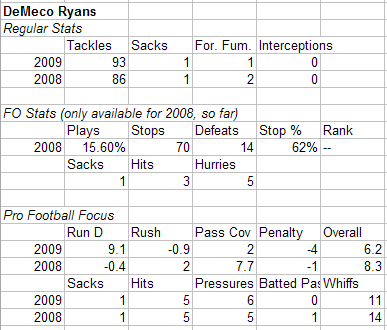 Ryans is a run-stopping linebacker, at least against everyone except Maurice Jones-Drew.  Very much an east-west guy.  Until this year, the Texans had a lot of problems stuffing the run to the outside because they simply didn't have anyone who could catch up on sweeps and be a reliable tackler asides from Ryans.  Adding Brian Cushing helped him play more to his strengths.  He's got great instincts on run plays and wasn't fooled too often on play-action.

Weaknesses?  Ryans isn't much of a pass rusher.  He's not awful, but he got blocked by a few running backs over the course of the year.  Additionally, while he's solid in the underneath zone, he can't run with a tight end deep, as Vernon Davis taught us this year.  That's more on Frank Bush and the Red Carpet Zone (TM) than DeMeco though, and it's hard to exploit either of those weaknesses.

Cushing didn't just play up to expectations; he destroyed them.  As much Bush bashing as you'll see from me, if he was truly the one who zeroed in on Cushing, he should be given a head scouting role no matter what success or lack thereof he has as defensive coordinator.  Cushing doesn't have elite timed speed, and while he gets a good jump off the snap, he's not winning any sprints.  His success is a testament to superb instincts.  Three of his four interceptions were on tips, and while he shouldn't be covering Dallas Clark one-on-one again any time soon without a bump, he was acceptable in pass coverage for the most part.  He's probably not as good in a zone as DeMeco.

Against the run, what more can you say?  He was a force to be reckoned with.  He sheds pulling guards like they're Roscoe Parrish.  He takes terrific angles and hits holes before the running back.  He's a stellar blitzer, although he's not fast enough to go around the edge very often.

This was the happiest I have ever been to be so wrong about a draft pick. 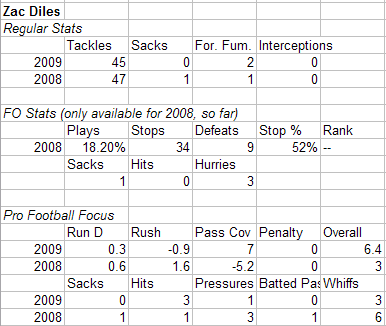 Diles has brought more to the table than he's taken away, alhough by no means would I lump him in as a good or even solid linebacker.  Unlike Ryans and Cushing, Diles isn't a very solid tackler, and he makes a few arm whiffs a year to go along with taking some questionable routes.  His strength is that he's good north-and-south and has a good motor, so he often catches up to guys after they cut downfield to prevent a positive play from becoming a catastrophic one.

He's not quite as good in coverage as that PFF rating, but he's the best zone linebacker on the team.  When you take the overall package here, you have Bernard Pollard with about 30% worse tackling and 20% worse coverage, except he's playing linebacker.  It's good enough to get by, but in an ideal scenario he's the first guy off the bench.

Marcus Freeman - Fifth rounder from Ohio State last year, mock drafts had him much higher, but injuries and size concerns dropped him to the Bears in the fifth.  The Bears released him in training camp, the Bills had him on the practice squad for a few weeks, and the Texans later hid him on their practice squad.  I'd be more optimistic about his chances but for two reasons: 1) The Bears gave up on him, and they know a thing or two about good linebacking, and 2) The Texans already have someone in this profile in Adibi, and they barely gave him a shot.  Why would they give Freeman one?

Darnell Bing - When you've been trying to convert from safety to linebacker for four years, you might be a practice squader.

Khary Campbell - Purely a special teamer.  Spent the majority of this year hurt.  Sort of old.  With these three traits, it wouldn't surprise me if the Texans told him to Khary his things out of the locker room.  Or perhaps they will just Khary on.

Chaun Thompson - Another mostly special teamer, Thompson looked like a decent pickup but has yet to really show much of anything.  Thompson and Campbell may be fighting for one roster spot.

Toddrick Verdell - If your Texans.com biography loads a blank page, you might be a practice squader.