From Best Defense EVAR To The Titanic: An Adventure in D-Suck Major

Share All sharing options for: From Best Defense EVAR To The Titanic: An Adventure in D-Suck Major

Last year, I did some posts detailing how we did against our opponent's norms.  In other words, did we play better or worse against our opponents than they did against the rest of the league?  "After the first three games" became some sort of mantra around these here parts because, well, we just didn't suck as bad.  And it's true!  We showed appreciable improvement after the first three games, or the point in time when we removed Dominique Barber and John Busing from the starting lineup at SS, replacing them with a statue.  I mean, Bernard Pollard.  Join me after the jump, complete with purty pictures!

I believed the improvement to be farcical.  In my conclusion in May, I compared the QBs we faced to a Frauder's Row of guys who maybe shouldn't have been starting games in the NFL (hello?  Keith Null?  I'm looking at you!).

Last year, we played QBs with an average Passer Rating (or QB Rating, if you will) of 77.4.  Basically, we played a bunch of Matt Hasselbecks, with Peyton Manning skewing the numbers upward pretty heavily.  So far this year, we've played an average of Aaron Rodgers or Matt Ryan, a hugely significant upgrade in quality.  The results, therefore, are not surprising.

Let's start with our rush defense, which has been incredibly effective this year.

So far this year, we've limited our opponents to 146.3 less yards than expected, or an impressive 18 yards per game.  And we ALL know you have to establish the run to win, so we must be kicking ass defensively, right?  RIGHT?!?!  I know John Lynch would never, ever lie to me.  Big-time know.

Here's how teams fare against our pass defense: 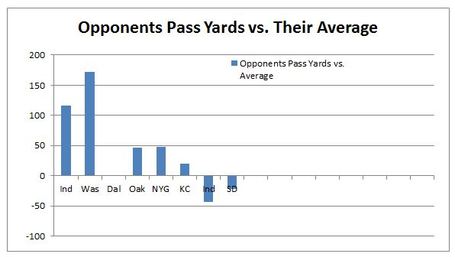 Yikes!  We are allowing an uncredible 337.3 yards more than expected via the pass, or over 40 yards/game.  Overall, as you'd imagine (and what you're heart and mind have been telling you through eight games), our defense is a giant sieve of suck:

Not even Brett Favre would send a self-penis-pic to something that ugly.

Now, the optimists in the crowd might start saying, "Hey, wait, if you just discount the first six games..."  And, yes, it's possible the defense is actually getting better.  However, it's more likely that the Colts played without Dallas Clark, Joseph Addai, and others, and the Chargers were actually grabbing Texans tailgaters out of the parking lot and inserting them at wide receiver.  Heck, even our own LoneSpot had three catches for 41 yards AFTER his 10th hit at the beer bong (btw, LoneSpot, Mike Carey is still pissed you threw up on him.  He says it's why he called that moronic grounding penalty.).

But let's delve just a little deeper.  I mentioned earlier that we are playing a much higher quality quarterback this year, one that ranks as above average this year even in composite.  However, we've taken opposing QBs, and we've turned them into Kurt Warner.  And I don't mean just Kurt Warner from last year, I'm talking the 1999 MVP Kurt Warner but with less interceptions.  Opposing QBs have pasted a 205-303 (67.7%), 2482 yards, 20 TDs, 5 INT line against us, good for a 107.7 QB rating.  This isn't just bad.  It's historically awful.

The rest of the schedule looks equally daunting.

I hate to end posts on a negative note, so here's this: