Listening to the Titans and Texans fans argue the past two days over who was the instigator and who was the escalator in the Andre Johnson/Cortland Finnegan scuffle has been like listening to the Richard Nixon/JFK presidential election coverage. No one is wrong, everyone knows how to best resolve the situation, and, more importantly, plenty of lip service from the candidates. But while one is apologetic for his actions, the other is running his mouth about what the other did wrong.

I don't endorse fighting between NFL players. They're role models and they are looked up to by youngsters who try to emulate their behavior in their Pop Warner and high school games. This isn't the NHL; fighting between two guys in full pads is like punching a bean bag. Well, at least until the helmet comes off. I'm not a fan of it.

BUT, I will admit that I loved seeing that leprechaun douche-nozzle Finnegan getting what he deserved. In fact, I think he got off light with just the couple of blows to his noggin. I think it would have been more fitting had Chris Myers, who restrained Finnegan from any retaliation efforts, drop-kicked him through the uprights on the opposite side of the field.

This post is more about Finnegan's reactions to Andre not getting a suspension than my personal opinions. So let's take a look at some of his comments to a local sports radio show in Tennessee after news broke of Andre only receiving a fine. After the jump...

Most thought that Andre's squeaky clean image and track record, combined with Finnegan's reputation as a scumbag, might play in Andre's favor. And this was correct, as he avoided missing any time and received only a $25,000 fine. I think he can afford it. In fact, it was probably the best 25k he's ever spent. But the leprechaun was quite displeased when he heard that his father wouldn't be suspended for the beatdown.

"As a respect issue, when your helmet comes off, the play is over. Did I want it to escalate into that? Absolutely not. At a point he snapped and he started throwing blows. The only thing that upsets me is if you reverse that and it’s me I have a game suspension."

Well, for someone who claims to WANT to be known as the "dirtiest player in the league," he sure sounds like he's trying to have it both ways. Is he right? Absolutely. Because he has already been warned and faced several infractions for his "style" of play.

Those comments are a far cry from the other guilty party.  Andre said:

"I really don't have anything to say about Cortland. I would like to apologize to the organization, our owner, my teammates. What happened out there was not me; I just lost my cool and I wish I could take back what happened, but I can't.''

See that, Finny? It's called taking the high road. No one who follows either of these teams should be surprised that this happened. If anything, they're surprised that it took this long. They almost got into it last year in Tennessee more than once. It's been a long time coming, and none of us can really blame Andre for "snapping and throwing blows." He's lucky he didn't drop kick him in the face while he was down.

It isn't only Finnegan running his mouth. No, an honorable mention goes to former Texans fan-favorite Jason Babin, who had his moment of diarrhea of the mouth, too:

"You would think a 220-pounder hitting somebody three times in the head would knock them out, but I guess Cortland is a pretty tough guy. 'Dre socked him three times. Both guys aren't supposed to do that, but I am surprised 'Dre took it that far, hitting Cortland without his helmet on.''

Those words mean a lot coming from a guy that has been fined four times this season for illegal/dirty hits, even moreso from a team that has a reputation around the league for playing dirty. Is it true? Only the players on the field know for sure. When it's a team you hate, it's called playing dirty. When it's a team you like, it's called playing hard.

Same goes with the debate between Texans and Titans fans over who instigated/escalated the fight between the two guys.  One thing that isn't very much of a debate is if we may see a shot or two being delivered when these two teams meet again.

I'm thinking the rematch just might be must-see TV. 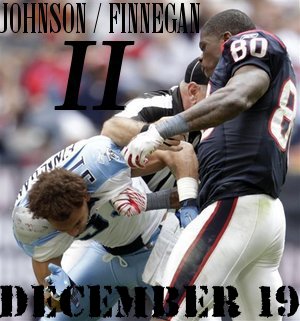