Discrediting Paul Kuharsky In Three Simple Photos (Plus Some Numbers)

Share All sharing options for: Discrediting Paul Kuharsky In Three Simple Photos (Plus Some Numbers)

Also, Finnegan actually did a pretty nice job on Johnson in the game. He helped keep Johnson in front of the defense, and held him to nine catches for 56 yards (6.2 yards per catch) and no reception longer than 21 yards.

Won't you channel your inner Sugar Hill gang, make like Apache, and Jump On It?

Kuharksy's statement only makes sense if you don't think that getting burned for a TD because you were so concerned with a player you had no responsibility for that you blew your coverage of the best WR in football is no big deal.  (Click pics to embiggen.) 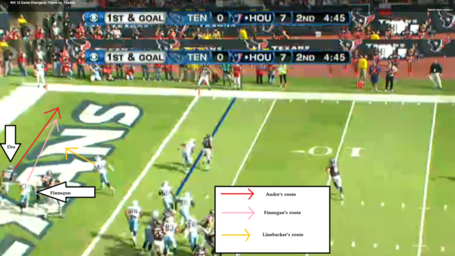 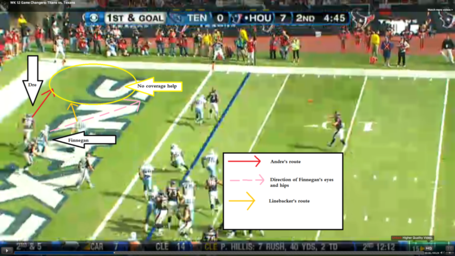 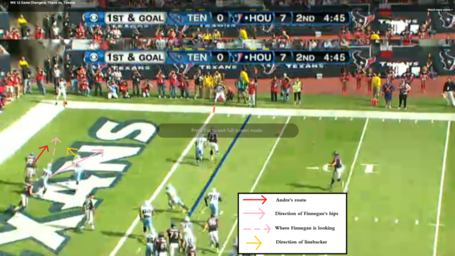 So Finnegan started off with responsibility for Andre and was in position, if he continued his coverage, to possibly defend the pass.  Instead, he started looking at the tight end dragging across the front of Schaub's roll-out --- though there is no way on God's green earth Finnegan would have gotten there to break up a pass --- and momentarily turned away from his primary coverage responsibility.  He did this despite a linebacker who actually could have helped with defense on the shorter pass realizing that Dre was the more likely target and trying to get back to help the play.

Even if Finnegan thought that Schaub was going to run (which would be a sign that Cortland did not watch any tape of the 2010 season), trying to make a play on Schaub by abandoning Dre before Schaub has crossed the line of scrimmage is asinine.

Also asinine?  Acting like Finnegan is the type of corner who can stop Andre Johnson.

Andre Johnson has exactly one bad game against Tennessee in the Finnegan era: a 2 catch, 29 yard performance in Nashville in 2008.  Having been at that game, I can tell you that Dre did not get shutdown by Finnegan; Schaub got manhandled by the Titans' defensive line and there was no Texans offense to speak of for anyone.

So ... yeah ... Finnegan was a big help in keeping Andre in check on Sunday.  He also won the fight against Andre, too, right?