Is John Clayton A Manatee?

Share All sharing options for: Is John Clayton A Manatee? 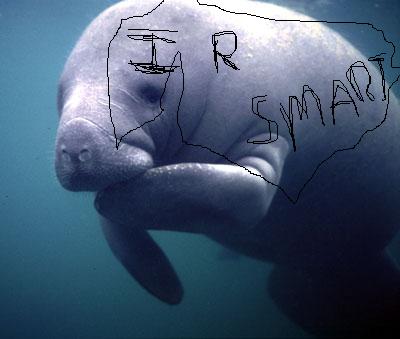 As you may know, I generally have made it my policy to avoid commenting on the likes of Peter King and Little Dicky Justice, Age 12.  That doesn't mean, however, that I will avoid calling out mainstream media types when I think it is worth my time.

I don't generally have anything against ESPN's John Clayton.  He is, after all, "a recipient of the Pro Football Hall of Fame's McCann Award for distinguished re porting" according to ESPN.com.  That's quite something.  That's a real award, not the kind of thing one branch of the media establishment gives to the other in some kind of back-scratching exercise.  No way.

Whatever.  Clayton's certainly not as annoying as King, and at the very least when you read his columns you aren't worried about how Brett Favre's prostate will survive the constant impacts with his nose, which is the feeling I get when I read King.  That, and King doesn't know how to count to ten.

But I digress.  Just this weekend I came across this little piece from the award-winning Mr. Clayton.   I fear that someone had kidnapped the award-winning Clayton and replaced him with a retarded manatee.  I wonder if the people at ESPN are aware of what's happened to the crown jewel in their NFL reporting.

After taking a couple of minute to digest it, the muse landed on my shoulder.   I would show the poor people at ESPN, who apparently weren't aware that John Clayton had been switched out for a large, waterborne mammal.  All I had to do was use my buddies cut&paste and google.

And that's what I done.  Shall we start?

(and now, by popular demand, the jump!)

INDIANAPOLIS -- In a perfect world, NFL teams draft the best players and best athletes available.  Each February, coaches, scouts and general managers assemble here to evaluate approximately 330 players. It's the perfect world. They interview the draft-eligible players and evaluate the physical skills of the ones who work out.

This is sort of like what I imagine Hugh Hefner does with potential roommates at the mansion.

Once everyone leaves Indianapolis, though, the perfect world disappears. Financial considerations enter the decision-making process, and those financial decisions will have a major impact on the 2010 draft.

Apparently the football professionals only begin to think of financial considerations after the end of the Combine.  Until then, they live in a world where every team drafts first and has unlimited budgets and Hugh sends some of his extra ladies over to their offices to fan them with palm fronds.  Nice world, that.

At the top of every draft, teams don't necessarily select the best athletes available. Often, teams take the players who make economic sense based on the positions they play.

This is an interesting theory.  I'd like to learn more.  Let's see an example.  Oh wait.  You're not going to provide one.  Ok.  Fine, then.

This year's draft will be the perfect test case for that premise. Most draft experts consider DonkeyKong Suh of Nebraska, Gerald McCoy of Oklahoma and Eric Berry of Tennessee to be the top three players. Here's the problem: Suh and McCoy are defensive tackles. Berry is a free safety.

Most likely, at least a couple of teams at the top of the draft won't be able to justify paying a defensive tackle or a safety top-three money. It could lead to a quarterback (Sam Bradford or Jimmy Clausen) or a left tackle (Russell Okung) vaulting up the draft board. Sure, coaches and general managers draft players in relation to talent and rankings, but finances and the reality of the game do enter the discussion.

OK, maybe you were waiting until now to hit us with an example, or perhaps a quote?  Or something remotely approaching evidence to back this assertion up?  Let me have it, John baby!

Let's start with the St. Louis Rams. They have the No. 1 pick, and many people believe St. Louis likes Suh more than McCoy. Here's the problem: Drafting Suh No. 1 when the franchise is without a true starting quarterback doesn't make much sense, particularly if the Rams don't bring back Marc Bulger.

Oh.  Never mind.  I'm sure you meant to put the example in there.  Your editor must have taken it out.  No problem, everyone has to please the boss.

Looking at the football side of things, Suh might not make sense for the Rams anyway. Selecting the Nebraska defensive tackle would mean the Rams would have him on a defensive line with Chris Long and Adam Carriker, three first-round defensive tackles in the past four years.

I can see how having three first-round tackles on your defensive line would be a problem, especially with that nasty Three-First-Round-Defensive-Tackles-On-Your-D-Line-And-You-Have-To-Sacrifice-Your-First-Born-Child rule.  Nasty rule, that.  Oh, and Chris Long is a defensive end.  But never mind, you're on a roll.

The problem facing the Rams is that they aren't one defensive tackle away from being competitive. They went 1-15 this past season. Adding Suh without a top quarterback might keep the Rams in double-digit loss territory.

Dominating defensive tackles can make an impact on good teams, but they don't always change the fate of bad teams. Former Steelers coach Chuck Noll built his Steel Curtain defense around Mean Joe Greene, but that team was loaded with Hall of Famers. Defensive tackles who go to bad teams can do only so much.

The Seahawks got a Hall of Fame career from defensive tackle Cortez Kennedy, the third pick in the 1990 draft, but Seattle had only one playoff appearance during his great career.

Maybe they should have taken a quarterback with that pick, huh?  Andre Ware was available, and he even won a Heisman Trophy!  He didn't go until number seven.  I'm sure that would have been a better choice.  Really, I am.

Glenn Dorsey, the fifth pick in the 2008 draft, didn't stop the downturn of the Kansas City Chiefs. Steve Emtman (Colts) and Dan Wilkinson (Bengals) were top picks, but they didn't turn around bad teams. The Cleveland Browns drafted Gerard Warren No. 3 in 2001, but the team struggled throughout the 2000s.

If only these teams had had the common sense to draft a quarterback instead of a defensive tackle.

That's why I predict the Rams will draft Bradford instead of Suh.

Lemme get this straight.  Because you, the mentally-challenged manatee who has kidnapped John Clayton and ghost-written his column, have made some completely arbitrary and ungrounded observations about the draft, you think the St. Louis Rams will follow your (il)logic and do the same thing?  Does this mean that the Rams GM is Matt Millen also a retarded manatee?

Actually, it wouldn't surprise me.

The Lions' 3-13 season in 2009 was a little more tolerable because they drafted Matthew Stafford. Quarterbacks offer more hope than defensive tackles, even if most teams rate the defensive tackle as the better choice. You win in this league with quarterbacks. [Emphasis mine.]

As great as Albert Haynesworth is as a player, the Redskins went from a playoff contender to 4-12 last season after giving Haynesworth a $100 million contract.

I take it all back.  The retarded manatee has won me over with an airtight argument.  Because the Redskins went from a playoff contender last in their division to, err, last in their division after signing Fat Albert, defensive tackles are clearly a liability.  Teams might as well not bother having them at all.  Every example we've discussed so far in this article involves a things going horribly awry when a team has signed a defensive tackle.  It really sounds like they're not worth it, amirite?

If Suh or McCoy is the top pick, either player will command a contract in the $12 million-a-year range. Teams would rather pay that for quarterbacks, left tackles or pass-rushing defensive ends who can produce sacks.

An impressive, concise, well-stated assertion, backed up with solid evidence nothing.

The economic realities also should affect Berry's chances of going in the top three. Maybe Berry can be the next Ed Reed or the next Troy Polamalu. Top safeties, though, make less than $8 million a year. If Berry goes No. 3 to the Tampa Bay Buccaneers, he probably would get a five-year deal for around $50 million, approximately $10 million a year.

Finally, we're advancing something approaching a fact to support an argument.  Awesome.  Broken clocks and all that.

If the Bucs take him at No. 3 and he isn't the most dominating safety in league history, they might not be able to justify re-signing him. He'd ask for a raise, and it will be hard for the Bucs to justify paying him more than $10 million a year.

He'll want a raise and the Bucs won't be able to justify it because he's not that good.  Interesting theory.  I don't think this has ever come up before in the world of sports.  How will teams handle this unique, ground-breaking situation?

If this were a perfect world, Suh, McCoy and Berry could go 1-2-3. The draft isn't perfect anymore because of economics. That's why I think the quarterbacks will move up with maybe one -- most likely Bradford -- going to the Rams.

...and journalism isn't perfect anymore because retarded manatees keep kidnapping award-winning journalists and writing horrible articles based on poor research and faulty logic.  That's why I think that ESPN will launch a nationwide manhunt for John Clayton's kidnappers with maybe one suspect -- most likely Peter King -- coming from CNNSI.com.

What a great closing.  After going out of his way to point out numerous flawed draft picks going back over a decade, the manatee laments that "the draft isn't perfect anymore."  The reason? Economics.  That's right.  The draft was fine until Milton Friedman and John Maynard Keynes got their wicked hands on it, those bastards.  And if the Rams actually take someone that their own personnel people likely acknowledge is, at best, the fourth-highest rated player in the draft with the first pick, the blame belongs not with their own front office, but with economics.

I sure hope the real John Clayton gets found soon.  This manatee is killing me.