Share All sharing options for: BRB From The NFL Combine: LEAVE PERRISH ALONE!! 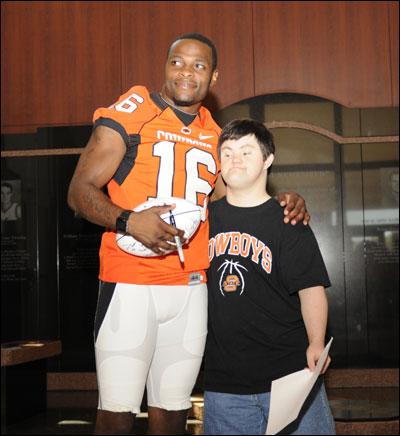 Welcome to Day 4 of the NFL Combine, where the crowds have dissipated and the remaining media is busy writing their wrap-up pieces.   I've been here about 2 hours and we've only had 2 podium-worthy speakers.  I chose to enter the Perrish Cox melee rather than deal with Oklahoma cornerback Dominique Franks, and I think I made the wrong decision.

I really doubt that Cox is actually on the Texans draft board by the end of the combine.  He might be the second-most talented cornerback in the draft after Florida's Joe Haden, but his off-field distractions are going to, in the words of Oakland A's GM Billy Beane, "put a milo on him."  He's got three children with three different women, he was arrested in 2008, and was suspended for Oklahoma State's bowl game this year.

There are quite a few players in the draft with off-field incidents, but Cox seemed almost completely unaware of the repercussions of his actions.  Throughout his media interview he repeatedly referred to teams talking about his off-field problems as "harassing" him.  He also revealed that when he was suspended from the bowl game for missing curfew, he'd actually been admonished earlier in the week (with teammates) for missing one.  "Met with my girlfriend at the time, it was a bad choice, I couldn't quite get back in time," he acknowledged.

It's a shame, because he might be the best fit for the Texans in terms of skill, scheme (he said Oklahoma State played about "50-50" zone and man), and need.  But referring to teams having questions about his off-field character after the incidents he's been through as "harassing" him makes it seem unlikely to me that he'll actually be on the Texans board.