BRB From The NFL Combine: That's A Wrap!

Share All sharing options for: BRB From The NFL Combine: That's A Wrap! 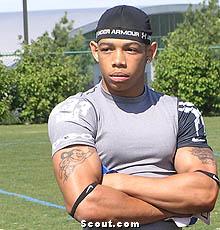 (Picture obviously courtesy of scout.com, it's the Legend of Haden: A Joe To The Past.  I really hope this becomes a sequel to Barkley: Shut Up & Jam Gaiden)

Joe Haden brought the big news of Day 4 of the combine:  He was the first guy I had covered who specifically said that the Texans had interviewed him already.  Of course, at this point the interviews really mean nothing, but it was nice that they targeted him.  It would probably take a trade up to land Haden, but as good as he already is, he thinks there is more there.  He explained to the throng that he'd been recruited as a quarterback, "I set many Maryland (high) school records.  I've only been playing corner for three years."  There might be some additional upside here.  He went on to say that run support was the easiest part of becoming a corner since he'd spent his little league and high school days playing linebacker, and that he prefers press coverage and bumping guys off their routes to playing zone.  If we had to trade up to get him, but Frank Bush promised to let him play press more often than the Texans did last year, I might even consider that smart.

It was sort of a listless day apart from the final press conference, which I actually got a full transcript of and which I want to save for later this week since it's more of an analytical coverage than an actual interview.  This might give away who it is.  Behind the jump will be tidbits from the majority of the big name corners and safeties, including Myron Rolle, Eric Berry, Kyle Wilson, and others.  Before I get there I'd like to give a thank you to SB Nation for letting me attend and Tim for vouching for me.  I'd also like to recommend you read the other SB Nation writers who went there.  In particular Matt Connor of Arrowhead Pride, who put up an astonishing amount of entries, but also Mojokong for Cincy Jungle and Peter Bean for SBNation.com.  Additionally I'd like to thank Drew Doughtery on the mothership (and his camera man Julio) amongst others for putting up with my constant badgering of Texans-related questions.  He's got some great podcasts up from here, including one with Rick Gosselin, who is absolutely the best mainstream media guy on draft coverage.  Okay, done making sure everyone will actually remember me when I make a LinkedIn page.  Now, onto the jump!

Brandon Ghee, CB, Wake Forest: Another soft-spoken guy I couldn't really hear much of since he wasn't at a podium.  "There were a few teams talking to me about safety, but not many," he noted.  He explained his lack of college interceptions (he only had 1) by saying that he'd had a few drops, but mostly it's because "not many people were throwing at me."  He mostly played man-to-man.

Eric Berry, S, Tennessee: Berry spent most of the time playing up his versatility.  He doesn't think being a safety should hurt him as far as going #1 overall because he's spent a lot of time in the box, he's played strong safety, he's played inside on passing downs, and he thinks he can do it all.  When asked why he left early, he told us that Monte Kiffin told him "you'd be a fool to come back," and later went on to say that he really had wanted to break the NCAA interception return yardage record but "teams were looking at me like I had the plague, nobody was throwing at me."   He gets motivation from us:  Every year before the season starts he takes the worst thing anyone has said about him, puts it on his bathroom mirror, and reads it while he brushes his teeth.  One media member then noted that his teeth were REALLY white.  "You know why."

Nate Allen, S, South Florida: Allen feels like he's improved already just in the offseason.  Most of the time he was making calls, directing traffic, he's not really a box safety.  Another one who won't run, because he pulled his quad.  He mentioned a lot of teams were asking him how much benefit he got from having Jason Pierre-Paul and George Selvie in front of him, which he honestly answered "it helped a lot."  Allen had a lot more complex defense from his freshman-junior seasons where he had to check out of things more often, but it was sort of toned down last year.  I asked him if he thought he could start right away and he gave a sort of humble "we'll see" response.

Taylor Mays, S, USC: I was in the bathroom for most of this conference.  Happens to the best of us.  I got back in time to hear him say "I'm a football player, I'll play wherever."  Like I said folks, versatility is the major theme.

Devin McCourty, CB, Rutgers: Played a lot of Cover 2 at Rutgers; that's a checkmark for the Texans.  He said he's more physical than his brother and has been hearing from teams that he could be as high as late first and as low as the 3rd or 4th round.

Major Wright, S, Florida: Kind of a tame interview.  They asked him one of the same questions they asked Haden, which was "How much did practicing against Tebow and the rest of these guys help you?"  I don't think I even need to type the answer.  He said he's a straight safety, and that Urban Meyer originally wanted him to come back but changed his tune late in the process.  The Draft Advisory committee gave him a grade of "No later than the third round."

Chad Jones, S, LSU: Chad played baseball, which is what most of the questions were focused on here.  Again, lots of talk about versatility and special teams play.  He went down from 232 pounds to 221 after the season and he thinks losing that weight will help him run a little faster and show a little more range.

Myron Rolle, S, FSU: "I want it as much as anyone else out here today," it began.  Rolle took the media on such a carpet ride that I don't think anyone even bothered asking him about football beyond his motivation for it.  He talked about having a roommate from Seoul who asked him why cameras were following him around and why he was famous, and how he tried to explain to him the concepts of the game.  He talked about playing rugby, although he was a wing, so he didn't get too banged up.  Of course, he talked about wanting to be a neurosurgeon later in his life, at about 40 or so, and how he was influenced by one of Ben Carson's books (he didn't say which).  A popular question that teams were asking him was whether his time away from the game would hurt his football career in the future, and he noted that "my academic pursuits helped with football."  In particular he noted that patience and timing were key skills in research and he thought they translated well to football.

Earl Thomas, S, Texas: John McClain got about half of the total questions in on this conference.  He kept repeating that he was a "ballplayer who was ready to play."  He doesn't care where.  McClain specifically asked him about the Texans and he said "whoever wants me, I'm ready.  That'd be a great situation."  He also noted that he'd put on about 13 pounds of muscle to help being in the box, banging heads all day.  Unfortunately, he also said he was a Cowboys fan.  Let's not draft him.

Kyle Wilson, CB, Boise State: Wilson praised his brother a lot of this press conference, and said he'd helped him get into college football by sending a recruiting video to all the top 50 teams.  He thought that "level of competition" between BCS auto-bid conferences and non-auto-bid conferences was pretty negligible.  Wilson thought his time in the WAC, playing against all those spread offenses, will help him in the NFL.

Donovan Warren, CB, Michigan: He did not come out because of concerns about the CBA.  He'll play whatever, but he feels more comfortable in man-to-man.  Warren went on to say he'd had three separate defensive coordinators and it was hard to learn a new system every year.