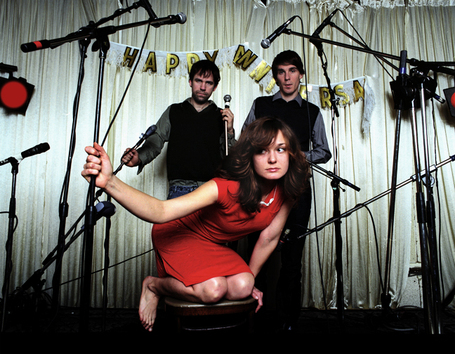 Yep, it looks like we're hitting that dead zone between the end of the combine, the end of the opening free agent frenzy, and that time pre-draft rumors really start heating up.  So lets all throw our music tastes around and compliment each other on our collective good tastes.  Except those of you who like that one band.  You know the one I'm talking about.*

I've spent most of the last couple of days hooked up to Land Of Talk's 08 album, Some Are Lakes.  Which is funny because I call myself Rivers, and it tells me that some of you are lakes.  It is good information to know!  Do you see what I did there?  Also getting recent play: The XX, M83, and Stars.

If you're drunk enough to laugh at misery instead of crying, my repeated viewings of The Falcoholic to snicker quietly to myself at the poor people who will deal with Dunta the next few years also led me to stumble on this fanpost.  The NFL on Hulu?  Who knew?  So I strolled over there and checked out the Texans section, which only goes up through 2005.  It's fun to see just how hard NFL Films tries to sell our bad teams to us, complete with signs like "Carr is God".  Examples I'm paraphrasing from 2002: Chester Pitts showed his determination by not missing a single snap all year at left tackle, Matt Stevens brought his Super Bowl ring and veteran toughness to the Texans secondary.