Wade Smith: Where Are We Going With This?

Share All sharing options for: Wade Smith: Where Are We Going With This? 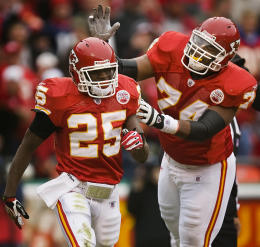 The Texans' first journey into non-futures free agency came last week as they inked ex-Chiefs guard Wade Smith to a 4 year, $12 million contract with $4.25 million in guarantees.  We had a nice little FanPost on the subject, but it was sort of hijacked by an argument along the lines of "Duane Brown is bad."  "Nuh uh!"  "Yuh huh!" and so on.  So lets spend a little time talking about what Smith will bring to the team.

Kuharsky's AFC South blog on the subject linked to Scouts, Inc's take on him, so let's start with that:

Smith had been pretty much a career backup up until he started seven games in 2008. He is athletic with good short-area quickness, agility, balance and body control. His most glaring weakness is his inability to stop powerful bull rushers on the inside. He understands angles and can react to movement and adjust to counter moves. He is more of a finesse blocker than a road-grader. He gives the Chiefs solid depth in that he can back up multiple positions.

The good side of this is that he sounds like a fit for the zone blocking scheme, which is pretty much what you'd expect from a Texans OL addition.  The bad side is that the "inability to stop powerful bull rushers on the inside" made me think of Chris Myers, which just made me go into convulsions.  Jaohhhh...okay, okay, better.

Next, I solicited a take on the subject from our sister Chiefs SBN site, Arrowhead Pride.  The general consensus among their commenters is that they liked Smith but didn't think he was worth the money that he got.  Here is what I got out of Joel Thorman from AP:

Wade Smith is one of those guys that you won't miss until they're gone. He's seemed to fit a lot of the criteria the Chiefs head coach and GM are looking for in players so his release was a little confusing (until I saw the contract).

Smith was actually a backup heading into the season but because of injuries ended up seeing time at center, left tackle, left guard and quite a bit of time at right guard. He's versatile, tough and quietly does his job.

The Chiefs line was terrible so admittedly it's hard to say he's a great player but he did rise above the other Chiefs at times.

I'd like to thank Joel for that tidbit, and you can check out their other stories on Smith here.  It's hard to fault the Chiefs and their fans for not wanting to overpay for an older player at a non-core position, especially given how Pioli works to cut costs and how they may be more than a few pieces away from being competitive again.

As far as the roster juggling goes, Kasey Studdard probably should be the one looking in his locker for red slips to send him down to the practice squad based on performance, but the coaches' unrequited love for him probably means Chris White is the favorite to be wandering the streets around Reliant shouting, "THEY TOOK R JERBS!"

From a statistical standpoint, White and Smith both performed about equally in their part time duty.  The difference, last year, was what they were better at.  Take it away, Pro Football Focus:

So this does appear, by the statistics, to be a run game fix.  Of course, if you ask Football Outsiders (and who doesn't these days?) the Chiefs' offensive line was abysmal up the gut in 2009, finishing 30th in ALY on runs to the middle and 32nd on runs to right tackle.  In 2008, they finished 30th in ALY on runs to the middle and 31st to right tackle.  At least they were consistent.  Of course, these could be due to surrounding Smith with Rudy Niswanger (a net -26 the last two years by PFF), Ryan O'Callaghan (a stunning -20.2 last year at RT), and Damian McIntosh in 2008 (-10.8 at RT in 2008), but FO refuses to speculate on individual offensive linemen.  Either way, it's pretty clear that Smith was not surrounded by optimal talent on the KC offensive line.

Gary Kubiak has said that he'll compete to start at all three offensive line slots.  My gut feeling is that the path of least resistance is at left guard.  While the Texans aren't a completely transparent organization, if Antoine Caldwell is your presumptive starting right guard, that tells me they still have faith in Myers.  And if they still have faith in Myers, that means that Studdard, Smith, White, and Mike Brisiel will compete at left guard, with two of the losers sticking around to man the bench and one of them heading to the practice squad or another team.

Bottom line:  I'm not completely in love with the Smith signing, but it's essentially low-risk, medium-reward.  The worst case scenario is that he ends up being line depth while the Texans suffer no injuries, essentially making him a highly paid binky that we can claim keeps tigers away and the offensive line healthy.  The best case scenario for the signing is probably that he starts at left guard, revitalizes the run game, and makes Studdard a reserve.  Either way, the Texans have bought themselves better interior stability at a slight markup.  Were there more important issues?  I suspect most fans would say cornerback is a bigger need to address.  But the Texans have stuck to their guns on who was worth what in the opening week, for better or for worse.