Share All sharing options for: BRB From The NFL Combine: Mike Mayock Offers Food For Thought 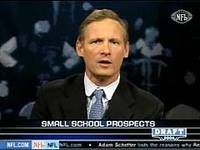 One of my best experiences at the Combine involved wading through the last day of interviews and hanging on all the way to the very end of the session, when Mike Mayock was finally made available to the media.  He was tired, we were tired, and it made for a good session in which neither side wanted to beat around the bush.

If you're anything like me, you wanted to know the basis behind his rationale for ranking Earl Thomas ahead of Eric Berry and Gerald McCoy ahead of Ndamukong Suh.  It took a bit of dancing, but we finally got this from him: "If you wanna be a little bit ahead of the curve as an evaluator of talent, I think you've gotta be looking at the point that it's a pass-first league.  It's not stop the run and run the football anymore.  You can just look around the league and see what's happening.  So, if I'm a defensive coordinator, and I'm an evaluator of talent, from the safety position, I think that position is becoming more important, okay?  When you start talking about 3, 4, 5 wide receivers, detached tight ends like Dallas Clark, what I wanna do is I wanna bring a safety up that's just as athletic, that will tackle.  And I'll give up a little bit in the run game to get a guy with better range and man-to-man capabilities.  And that's Eric Berry, and that's Earl Thomas from Texas.  Those are the two guys that I think are high first round picks."  He went on to say that he has McCoy over Suh because he thinks he is "more disruptive in the pass game."

While I agree with the fundamentals of his statement, I'm not sure I want to rate Thomas and McCoy ahead of Berry and Suh just for the slight difference between them in the pass game.  I'd rather have the better overall player and then worry about drafting against the pass or against the run in the lower rounds.

More quotes after the jump, where Mayock summarizes the John Clayton is a (mentally challenged) manatee position for our very own TGC.

On strengths of the draft: "That defensive tackle position, typically 7 or 8 go in the top 3 rounds. I've got 14 defensive tackles that I've given first, second, or third round grades to.  So what happens?  Are they good enough to push some of the offensive guys down, or does it even out like it usually does in the draft where some of those guys with third round defensive tackle grades get pushed into the fourth and fifth rounds?  The defensive side of my board is heavy....on the offensive side, running back, tight end, is extremely good.  You can get guys in the fourth and fifth round that should have never got out of the third... Wide receiver is not top heavy but there's good depth.  Outside of quaterback and interior offensive linemen, I think this is a very good draft."

On Bruce Campbell: "He didn't deserve all-ACC...He's a boom or bust.  Seventeen starts in college football.  He sat on our desk yesterday and if you go to Webster's and look up offensive tackle, his picture should be there.  I've never seen a guy who looks that good in a pair of shorts as far as what a tackle should be.  But he's a junior with seventeen starts, and there's a lot of average tape on him...when I graded him out I gave him a second round pick based on upside.  Someone's going to get carried away with what they saw this weekend."

On Kyle Wilson: "Most people have Haden #1, as do I.  After that I have Kyle Wilson from Boise #2, he's a guy I watched a lot of tape on, and I took a lot of heat going into the Senior Bowl because I had a first round grade on him and other people didn't, I think he showed footwork and change of direction skills that people didn't think he had....I think the NFL looks at him as a late one or mid two, and I see him a little higher than that."

On Devin McCourty: "He's a guy who I think will run well.  Asides from being a very good corner and a very physical corner, he might be the best special teams prospect in the whole draft.  And I mean from a return perspective, gunner, jammer, he makes tackles.  I think you get quite a package if your draft McCourty, which is pretty cool."

On Patrick Robinson: "He's got the best feet of any corner in the draft.  Six interceptions as a sophomore, only one since. On tape he's inconsistent.  One game he looks great, the next game it looks like he doesn't care."