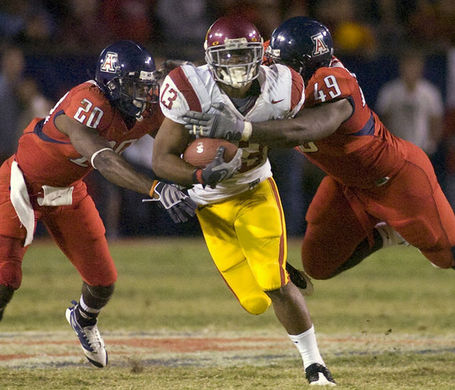 Nothing against Earl Mitchell, but I believe this was an awful pick. Let's start with a little analysis by AJ Burge:

Mitchell is a smallish defensive tackle and his selection in the third round seems like a message to Amobi Okoye that the Texans are not satisfied with his production at the 3-technique.

I think AJ nails what this pick is about. Entering his fourth year, the Texans are worried about a 22-year old DT who is just starting to reach both his physical and mental potential. Of course, let's completely ignore the sinkhole that exists at the other DT spot, which is currently manned by Shaun Cody and an unsigned, 58 year old Jeff Zgonina.

But we need to send a message to Okoye? Or do we believe Mitchell is the answer to line up next to Okoye?

So let's take that second, glass mostly empty theory. We drafted Mitchell to play alongside Okoye. That's two barely 300-lb DTs who aren't blessed with great strength who we hope will be able to hold up against the run. Let's look at a couple of scouting reports.

Mitchell's quick burst off the line put college offensive linemen off balance, but that might be a tougher task as a professional.

A position change is a possibility since Mitchell is considered coachable with a strong work ethic and good attitude. While his athleticism is praised, he's struggled to break away from blockers and also batting down passes, making his hands an area of concern.

Strength is marginal. Struggles to hold up at the point of attack in the running game. Still fairly raw.

He could be a steal in the 4th or 5th round. He has a very high ceiling, but is a project. He may be best suited for defensive end in a 3-4 scheme.

Let's remember: this is our 3rd Round pick. If I sound frustrated with the pick, it's because I am. The draft is the perfect time to address problems, and I'm not sure what drafting Mitchell solves when we have so many other weaknesses on the team, especially at DT. If we drafted him to replace Okoye, we just gave up on a 22-year old who has had the likes of Travis Johnson and Anthony Maddox playing next to him. If we drafted him to play next to Okoye, we are weakening the strongest unit on our team: our linebackers.

Allow me to explain. Neither Okoye nor Mitchell could or should be considered stout against the run. Instead of either of these guys taking multiple blockers, we'll allow opposing offensive lineman and fullbacks easy entry to our second level, where DeMeco Ryans and Brian Cushing will have to deal with a lot more blocking traffic.

I am sorely disappointed in this pick, and I'm just not going to hide it. But I've been wrong before, and I'll be wrong again.