Why I Crush On Large DTs - UPDATED

Share All sharing options for: Why I Crush On Large DTs - UPDATED 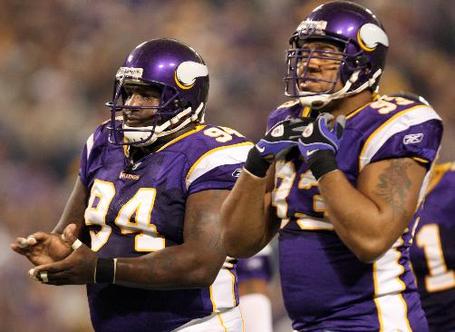 Above is the "fabled" Williams Wall of the Minnesota Vikings.  There's a reason why the Vikings was the hardest team to rush against in 2009 and were fourth in 2008:  It's because of the two gentleman above.^

And here I go, nursing at PFF's statistical teats once again to prove my point.  My hypothesis is that the best DT run-stoppers are also those the are quite large, meaning bigger than Earl Mitchell's listed 296.  Looking at the Top Ten DTs graded against the run last year, we have the following leaders, along with their listed weight:

A couple of the weight listings up there are a joke.  Williams and Gregg are much closer to 330, and Wilfork looked a lot closer to 380 than 325 in his suit when the Pats visited us last year (in fact, he has to meet weight standards to get certain bonuses).  Of the group listed above, only Ratliff would I consider to be thriving off his quickness versus his pure size.  Bunkley is close, but he excels with strength above quickness.  Otherwise, the list above is entirely beef.

After looking at these lists, two things jump out at me.+  First, it's vitally important to have the last name of Williams (Dan Williams???).  Secondly, beef wins.  On the second list, Patterson and Ratliff rely on their quickness as opposed to pure strength or size, but they are the outliers.  Again.

Once again, you have to wonder about the selection of Mitchell as opposed to other, glaring needs.  It would not be specious to believe that Mitchell does not carry the size to be a one-technique; thus, the only real place for him is at the three and competing against Okoye.  At NT, this still leaves us with Shaun Cody, who has proved beyond a reasonable doubt he's not the answer, and the Zombie Jeff Zgonina, who is still unsigned.  The possibility of DelJuan Robinson is still out there, and he graded out at 17 in 2008.

So, before all of you here:  Gimme the beef.  I want my DTs to be large men (or Rosie O'Donnell sized) who are strong, take up a lot of space, demand multiple blockers, and make life hell for opposing offensive linemen.  We may have taken a DT in the third round, but he does not address our needs there, and until we do something about it, we will pay for this problem.

Edit: Just because I'm talking about this AGAIN does not mean I'm done beating this dead horse.  After all, a dead horse don't mind being beaten.

Running the numbers for Kollar's performance as a defensive line coach, we see a long string of mediocrity.  Let's look (all rankings via FO):

This averages out to a 19th ranked rushing defense and 15th in sacks.  Of course, there are more than these variables that play a part in performance.  Except for the tremendous outlier in 1998, the team rushing numbers against would be even worse.  There are some fleeting moments in sack performance.

Overall, we are putting together a line that might have an occasional year with above average performance rushing the passer, but any expectations we will give much more than a fleeting effort in stopping the run are sorely misplaced.  In my not-so-humble opinion, this trade-off is completely unacceptable when there are so many other things one can do to pressure the QB than have quick, defensive tackles who'll get eaten alive against the run.

+ 2007 is roughly the same and includes Shaun Rogers, another man-mountain.