Offensive Expectations: How Did We Do in 2009?

Share All sharing options for: Offensive Expectations: How Did We Do in 2009?

A couple weeks ago, I reviewed our defense and how we performed against our opponents on a game-by-game basis.  After the jump, I'll look at the offense.  OK, ready......JUMP!

I think it's safe to say our run game struggled just a bit.  Not like I'm giving the punch-line away or anything here, but once we look at the chart, it becomes frighteningly obvious.  Special note about the charts:  Our opponents' totals have been "normalized" so that our game is subtracted from their averages.  By doing this, I think we can get a more clear view of how our offense performed against our opponents versus their other 15 games.  As an example, the Jets gave up 98.6 rushing yards per game.  However, once our paltry 38 yards is removed, they gave up an adjusted 102.6 rushing yards per game.  Make sense?  Let's go to the charts.

For only three out of 16 games, we out-rushed our opponents' averages.  All three of these games were wins: Buffalo (Ryan Moats), Miami, and New England (both Arian Foster).  Our rushing performance against the New York Jets, Arizona, and especially St. Louis stick out.  The first two of those were losses, and we nearly lost to the Rams.  Does our run game have an impact on Ws and Ls?  The Magic 8 Ball says: "All signs point to yes."

(Of course, the question of whether or not we have improved the run game during the off-season remains.)

Our passing offense is a mirror image.  We only underperformed expectations twice, against the Jets and our second match-up against Jacksonville (which, of course, included the Sex Cannon Experience).  Let's take a look. 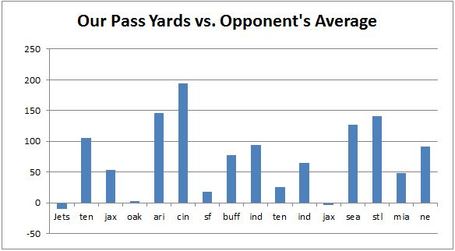 That's outstanding.  Mush it all together, and we get...

Aside from the Oakland game, when it's fair to say we became a bit conservative, you can easily see three of our losses above.

My conclusions: Well, we need to fix the run game.  I fully believe you use the pass to set up the run, not vice versa.  This makes our run game even more problematic when you consider the strength of our passing game.  Overall, there just aren't any surprises here.  We moved the ball well through the air, not so much on the ground.