...how good were we, really?  (Or how bfd kept being a jerk about this whole defensive line thing?)

I updated information on a couple of posts I did during the season, which took a look at how we were doing against our opponents relative to their average.  Jump to see the final results (Note to self: Look into getting a chorus).

Here's how we wound up against teams versus their average in total yards.  In other words, if we held teams below their average yards per game, it'll show up as a negative (a good thing):

As many have argued, the defense improved drastically after the first three games of the season.  Sadly, those three games still count in our total stats (and the two losses were especially painful).  For the remainder of the year, opposing offenses gained 341 less yards than expected, though almost the entire total is comprised by the Oakland, Buffalo, and New England games.  Breaking it down further, we can see the vast amount of the improvement came from stopping the run, as seen below:

Against the pass, we overall played right to expectations, allowing an insignificant 26 yards more than expected (after the first three games): 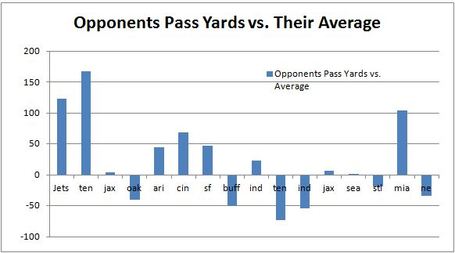 Overall, including all games, we gave up 106 more yards than expected with pass defense being the weakness (+322 yards versus -216 rushing yards against).

But, I believe it's necessary to break this down a little deeper.  As I've argued, it's not like we played against the Steve Youngs of the world.  Heck, we barely played against the Matt Hasselbecks.  Here's the Frauder's Row of QBs we got to face in 2009 (QB Rating):

That's an average QB rating of 77.7, or we basically faced the equivalent of Chad Henne every time out, and these numbers include playing Peightun twice!

Our best defensive games came against, in order, a JaMarcus-led Oakland (101 yards less than expected); a sleep-walking New England squad on the last day of the season where Hoyer came into the game for large chunks (-80.4); Buffalo, who fired their coach after the game (-69.9); and a St. Louis Rams team being led by the mighty Keith Null in his first career start (-42).  What's an easy way to improve against the rush?  One external way is to play crappy quarterbacks.

What did we do as a team when facing this list of thunderous quarterbacks?  Why, we jammed the box, and we dared teams to beat us through the air.  This was made possible, in part, by Bernard Pollard's signing.  But it's also a logical strategy, one most teams would (and did) employ in similar situations.

However, we'll likely play much higher quality QBs in 2010 than we did in 2009.  JaMarcus will be replaced by Jason Campbell, and there's Phillip Rivers and Donovan McNabb, and no Kerry Collins or Keith Null or Ryan Fitzpatrick on the horizon.  Stuffing the box just won't be as effective this year because we're now playing quarterbacks who can beat us with their arm.

Conclusion: I can't help but feel we were pretty lucky in who we played in 2009.  There was a positive correlation between the quarterbacks we played and their putting up higher than expected numbers against us (Palmer, Peightun, Henne).

We can continue to argue about the gap-shooting DT versus the space-eating DT, but Bill Kollar, Frank Bush, and Rick Smith have had the final say.  2010's record, I believe, will depend directly on our ability to stop the pass.  If we cannot, we cannot reasonably expect to stop the run, either (passing successfully opens up the run, not vice versa).  Kollar's erratic history in getting to the QB has me concerned, to say the least.  But Rick Smith seems to thoroughly enjoy proving me wrong, so who am I to argue?

OK, well, this might be a good thing.  However, where I beg to differ is that, the less time the QB has to throw the ball, the better.  Even if Jackson can lock his receiver down, there are still three or four other eligible receivers that need to be covered.  More time gives receivers a better chance to create separation.  My extremely strong preference would be to decrease the amount of time the QB has to throw, not make him hold it longer.