Welcome back, junkies masochists football fans. It's the end of the week, so it's time to wrap up the fourth week of men in shorts a/k/a Houston Texans organized team activities. This is also the final edition of OTA link & news round-up for 2010 as the Texans move to phase two next week: mini-camp.

Texans News Roll Call
- TexansChick on whether the young Texans need a veteran or two.
- ESPN AFC South Blogger Paul Kuharsky was with the team this past week. Here's an outsider's perspective at Tuesday's OTAs.
- Glover Quin wants more work, according to Kuharsky.
- Speaking of CBs, the fiesty Anna-Megan Raley reports that Sherrick McMannis is way behind.
- Raley also gives you a CB breakdown, as far as who's practicing with what team, here.
- Bleacher Report on Ben Tate's potential impact.
- David Anderson comfortable with doing what's asked of him.
- Kuharsky on Dorin Dickerson.
- Kuharsky's notes on Wednesday's OTA with a focus on the DBs.
- Rick Smith's deadline to get any new deals done? The season opener, according to this ESPN report.
- Wade Smith happy to get an opportunity for a starting job.
- The Examiner's Alan Burge recaps Kubiak's speech at the Touchdown Club.
- Kuharsky on the effort to improve the Texans and their run game.

Once again, join me after the jump where the bigger news (and someone else) roams.

The New Hope
Ben Tate went through a full day of OTAs on Tuesday. How'd he do? "He's faster than everybody else, so obviously he's fresh," Kubiak said. "Things I was impressed with: Obviously, he was paying attention and knew what he was doing. We were actually doing some tough stuff on him today as far as no scripting, just calling stuff and seeing how guys react and turning the noise on. It was good to see him out here and get going." The real question is if Tate can learn and show enough to get that starting gig. Even if he doesn't, I imagine Indianapolis, with a weak spot at DT, will see a healthy amount of Tate and Foster in Week One.

There Are No Moats in Houston
As bfd posted, the Texans cut veteran running back Ryan Moats on Thursday afternoon. As I said in the comments, I'm not surprised and glad the Texans did right by him. Moats was behind Steve Slaton, Tate, and Arian Foster on the depth chart. I had pegged him as not making the roster since there were three guys ahead of the 27 year old back. Cutting him now, before training camp, allows Moats to try and catch on somewhere else as a change of pace back. Good luck in the future, Ryan.

Quin Wants a Nickel
As linked above, ESPN AFC South blogger Paul Kuharsky reports that Glover Quin wants to play the nickel cornerback role in addition to his outside role. There's no cloning involved. He just wants to start, but slide into the nickel when three or more wide receivers hit the field. While I applaud his ambition, I don't know how I feel about him moving around. I suppose if the slot receiver is a route runner (a la Wes Welkah) then it would be nice to have the physical Quin jamming him, but would that create a mismatch at the outside? This is where it'd be nice to have Antwaun Molden healthy and showing that talent off.

The Battle Lines Are Drawn
According to Kuharsky's article on Wade Smith above, the five linemen fighting for three spots are: Antoine Caldwell, Kasey Studdard, Chris Myers, Mike Brisiel, and Wade Smith. Kuharsky suspects that the final starting lineup won't get announced until midway through training camp, which would give the starting unit some time to gel. If I had to guess then I'd go Caldwell-Myers-Studdard as starters with Smith, Brisiel, and Shelley Smith as your back-ups.

The "Picking" Order
If you looked at AMR's post on cornerbacks, then this is the depth chart order one can put together: Ice Kareem Jackson, Glover Quin, Brice McCain, Antwaun Molden, Jacques Reeves, Fred Bennett, Mark Parson, and undrafted free agent Pierre Singfield (possible candidate for the practice squad). Sherrick McMannis hasn't been able to practice, so who knows where he slides in. In my opinion, Bennett and Parson will be cut, Singfield heads to the practice squad, and Kubiak will carry six CBs on the main roster.

Kicker's Scoreboard
Last week, both Kris Brown and Neil Rackers went 8-for-8 in competitive situations (Side note: What the heck does that mean? What's a competitive situation in shorts with no one charging?). This week they each kicked five a day. On Tuesday, Rackers missed one. On Wednesday, Brown shanked one. It's about as even as you can get until Thursday. Eight kicks, Rackers misses one and Brown misses four straight to end it. Yup, four straight misses. You're having a flashback now, aren't you? Hopefully, Neil Rackers the best kicker Neil Rackers emerges. Yes, I'm anti-Kris Brown. He's kicked below 80% on FGs made in five out of eight seasons as a Texan. It's time for a change. Is Neil Rackers the guy? Maybe not, but Brown's nothing special.

Mini-Camp is for Youngsters
Next week's mini-camp is for the younger players only, Kubiak said on Thursday. The veterans will work with strength and conditioning coach Cedric Smith in the mornings while the coaches get a lot of time with the youngsters. After the pulled groin to James Casey, Garrett Graham has an opportunity next week to make some noise at TE, which should be among the bigger stories at mini-camp.

Break It Down
As linked above, Coach Gary Kubiak spoke at the Touchdown Club in Houston on Wednesday. He gave an informal state of the Texans speech. The Alan Burge article is a must-read. If you want to watch it then TexansChick has you covered here. It's worth a look. There's a definite shift in attitude. In regards to the tough schedule, Kubiak said, "I don't care who we play. I care about how we play." He also said that the usual "one, two, three...Texans" breakdown is gone. What's the new breakdown? "Super Bowl." Hell. Yes. 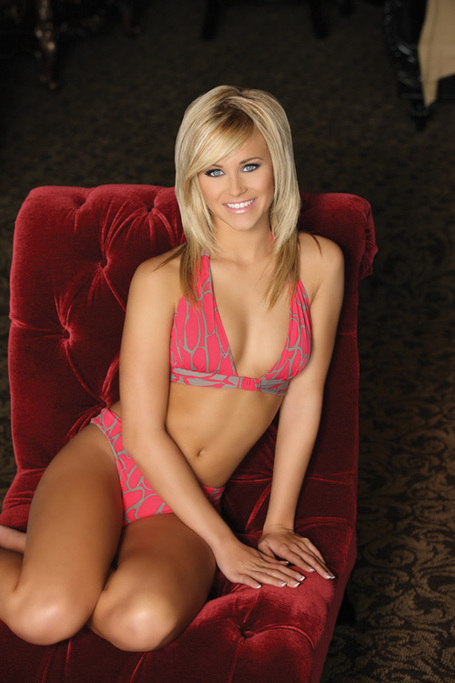