Share All sharing options for: Prognostibating: The 53-Man Roster, Take 1 - The Offense

Amongst the myriad of things "wrong" with me, I am obsessed with roster construction.  There are GMs like, for example, the execrable Ed Wade, who simply do not understand how to build a roster.  Most of the onus is on the GM to put together the players, but Head Coaches certainly have some input.

One thing I can say about your Houston Texans: the team puts together rosters well, finding the right players for the right roles.  More after the...the...the...JUMP!

As of today, the Texans have a "roster" of 82 players, two more than allowed.  Now, I put roster in quotes because we still have five unsigned players, but we still need to trim a whopping 29 players off the squad before showtime.  Obviously, this is all premature, but I have no other ideas for a post, and Tim won't give me my kittens back.  Anyway, here's my first pass at the 53-man roster.

QB Thoughts: If we carry a third QB again this year in an emergency QB capacity, I believe it'll be a yet-to-be-signed veteran over the completely unproven Booty.

RB Thoughts: Ranked in no order above, but I firmly believe Slaton proves to be healthy and makes the team.  Henry and Johnson will be there in case he cannot, and my money would be on Johnson in that scenario.  Even if we have these five, I would not be surprised if we signed another body or two before pre-season ends.

FB Thoughts: I believe that Leach's poor play in 2009 is one of the most overlooked factors in our weaknesses.  Leach has a lot to prove, but Griffith is not the guy to push Leach.  I sincerely hope that, with Baby Shan now in Washington, the infamous Vonta swing pass will be a thing of the past.  But Leach didn't block well last year, either.

WR Thoughts: OK, kinda cheating here with six WRs listed, though I believe we'll only ultimately carry five.  HOWEVER, I think there's a desire for Holliday to become a return specialist, so this one will need to play out.  I don't think Andre Davis is back - he wasn't productive either as a WR or as a return man last year.  I admit that Trey Stross is intriguing, profiling strongly as a Walter-type player (and, of course, ALL white WRs are the same.  Every, single one of them).

T Thoughts: Stenavich is the only bubble guy here, but I thought he played pretty well in preseason last year.  Pemberton is 6'7", though, and he could create an uncomfortable spot for Stenavich.  Last year, we carried more interior linemen than we had in the past (Kubiak had carried four tackles in 2008 and 2007), and I expect we'll revert back to that next year.

G/C Thoughts: In a statement that should shock nobody, I remain direly concerned about our interior line play.  Mike Brisiel's health is pivotal to our roster construction and our play on the line.  Wade Smith and Chris White both make the team based on their versatility.  Antoine Caldwell had flashes and, as a second year guy, he'll be on by default.  Studdard's roster spot, much less a starting spot, continues to amaze and bewilder me.  If Brisiel is healthy, Shelley Smith simply has no chance to make the roster, though I believe he'll be quickly snapped up to be on the developmental squad.

TE Thoughts: As we all know by now, the Texans collect tight ends like MDC collects pics of male genitalia.  We currently have 863 tight ends under contract, but of that bunch, I only see Daniels, the criminally under-rated Dreessen, Casey, and Graham making the roster.  Even then, much depends on Daniels' health, but, with his history of bouncing back, my doubts of Daniels are minimal.  Anthony Hill was simply atrocious last year, and I don't see him making the roster with a new, shiny Wisconsin alum Graham on the roster (Daniels' alma mater, as well).  I'll go out on a short limb and predict this is Daniels' last year with the team, as we just have so much talent at the position.

PS: Tim, can I have one of the kittens back now?  Please?

Update: Just wanted to give a quick little response to Bryan and TESXON regarding the WR situation (plus, it's much easier to upload pics this way).

To me, it's very clear that both DA and JJ are ascendant at the expense of Davis.  Over the past three years (reflected in the graph below), Davis has flat-lined since late 2008 while both DA and JJ have taken far more active roles. 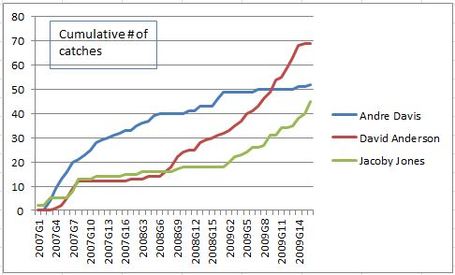 DA, especially, has come on strong since mid-2008.