If there is something I am confident about, it is that most of us here do not like the Cover 2 Zone defense or as it has come to be known around here - the battle red carpet zone. At times last season, it felt as if the defense just let teams walk right down the field at will.

Yet, what exactly is a Cover 2 Zone defense? According to an old friend, knowing thyself is half the battle. Yes sirs and ma'ams, it's time for a little football education right before the season because the more you know...the better you can complain! JUMP like the Mario Brothers and land on the Goomba-shaped head that is Frank Bush's defense.

A zone defense is where players handle their own zones, or sections, of the field. There are a lot of alignments which use some form of zone, such as the Tampa-2, Zone Blitz, or the Cover 1, 2, 3, 4 and 6. Aside from the special case that is the Cover 6, those numbers signify how many men are dropping back to cover the deep zone. The Cover 2 Zone is a variation of the Cover 2. Other variations include the Cover 2 Man, Inverted Cover 2 Man or Zone, and cousin-esque Tampa 2. In a Cover 2 Zone, referred to as C2Z from here on, you have two men who split responsibility for the deep zones of the field - the safeties.

The deep zone is defined as deeper than the deepest receiver and wider than the widest receiver. In other words, a Cover 2 safety wants to keep everyone in front of him. In this system, safeties think pass first and should be more suited for coverage than run support. The Cover 2 will test their limits as far as how much ground can they cover and how fast they can read-and-react.

In the C2Z, the cornerbacks will typically cover near the line of scrimmage - the flat zone. The traditional C2Z system will utilize corners that successfully jam the receiver at the line. Jamming helps disrupt a route's timing, which can lead to bad throws, while also letting the safeties analyze what's going on. Due to the fact that they are responsible for screens and sweeps, the cornerbacks need to tackle well.

Linebackers also play a role in the C2Z. The Will (weakside - side of the defense where the tight end isn't) and the Sam (strongside - usually shadowing the tight end) will take the hash marks on their side of the field to take the deep curl zone. The Mike (middle linebacker) drops back just a tad from their stance to take anyone running across the middle. The linebackers in a C2Z must have good recovery speed, coverage abilities, and play recognition skills since they are responsible for some hot areas on the field.

For you visual people, here's a diagram of the basic C2Z out of a standard 4-3 alignment. 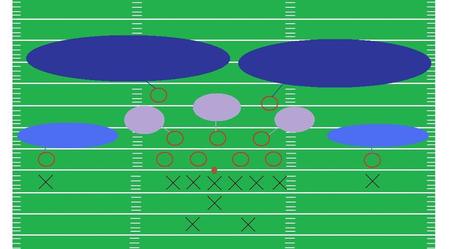 Overall, the defense should be fairly balanced since it has seven men in the box to handle the run and will keep the pass in front of them. The C2Z looks to take away the big play and limit the offense to short gains. If the offense gets to the red zone, the C2Z should prevent them from scoring a touchdown by having someone responsible for most parts of the field. In other words, it's a "bend don't break" defense at its worst. If you have athletic, speedy coverers or a great pass rush, then your defense has legit top 5 potential.

Of course, there are weaknesses. Spreading the defense with 3 or 4 wide receiver sets will potentially put more receivers in the deep zone than safeties, which will really pay off if the defensive line cannot get pressure on the quarterback. If your defense lacks back-end speed, then speed demons could slip behind the safeties easily. There's also trouble on the seams with quick slot receivers or tight ends. The below figure shows the soft spots on a standard C2Z - essentially a bunch of mid-range passes. An accurate quarterback with time will shred this defense especially with mid-range passes. Does that sound like anyone you know? 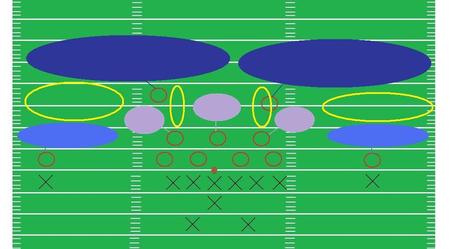 Now, what are the problems with the Houston C2Z? Let's see if your Spider-Sense was tingling as you read this little piece.

For starters, there's no free safety that has the range needed for any sort of Cover 2. Eugene Wilson is a veteran, so he might have some tape and analyzing skills, but his speed is average and the weekly annual season injuries mean the defense typically has a young, inexperienced, late round-drafted safety back there. That safety is a back-up for a reason.

I love the linebackers, even MDC's buddy Zac Diles, but their strength is not suited for zone coverage where slot receivers and tight ends roam. You need proof? Go back and look at Dallas Clark and Vernon Davis versus the Texans. Need more proof? Look at the Football Outsiders' ranking for your Texans versus tight ends in 2009. They're 29th overall, which is easily their worst pass defense mark.

For a C2Z defense, I don't see Frank Bush putting the corners on the line a whole lot to constantly challenge and jam the receivers. If that receiver gets off without a jam then the C2Z is already behind. As I said earlier, jamming the receiver throws the timing off which can help the coverage and/or pass rush.

It would be nice if the players and schemes were a perfect fit. However, the chances of that changing in the next few weeks are about the same as bfd giving up tacos. Since we're stuck with what we got, it's time to mix up the defensive looks. Let's see some inverted Cover 2 (safeties and cornerbacks flip duties; shown in the last picture) to throw teams off, or maybe even flip the zones of the corners and linebackers. Let's work in some C2M and C2Z with some zone blitzing. Basically, I would like to see the defense attempt to spice it up and give the offense different looks to follow in line with Sun Tzu's idea that "all warfare is based on deception."

Reggie Wayne, as said by CBS broadcasters during an Indy-Houston game last year, said the difference between the Baltimore and Houston defenses is that you knew what Houston was going to do while Baltimore always kept you guessing. I'm not asking for smoked paprika or cayenne pepper, but just add some salt and pepper to this recipe, Frank. 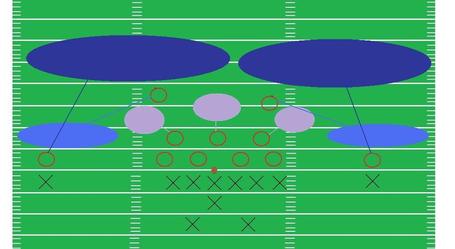 Aside from some C2Z insight, you should also walk away confident about starting rookie cornerback Kareem Jackson. The pick of Jackson makes a lot more sense when you see what is expected of a C2Z corner and look at Ice Kareem's strengths. He'll play like a rookie but still better than Burnt Toast at first, but I expect him to hit his stride after about the bye week. Playing in a system that maximizes his strengths will really help Jackson.

The system may fit him, but it'll be up to Frank Bush to put Ice Kareem, and the others, in a position to succeed with his plots and schemes. Last season, THE BEST DEFENSE IN FRANCHISE HISTORY!!11 coincided with THE BEST SEASON IN FRANCHISE HISTORY!!!!11! It's fair to state that this team will only go as far as Frank Bush's C2Z takes it unless Matt Schaub throws for like 40+ touchdowns.