Frank Bush And The Aggressive Defense That Never Was: A Case Study Of Good 4-3 Defenses

Share All sharing options for: Frank Bush And The Aggressive Defense That Never Was: A Case Study Of Good 4-3 Defenses

The Texans, two weeks ago, held the Bengals to 46 second-half yards in Cincinnati; they gave the Bills just 83 yesterday in Buffalo. Bush has added speed and aggression to a defense that too long had been Mario Williams and DeMeco Ryans and nine average Joes. There's a personality to this defense now, a swarming aspect that wasn't there in the past, and the Texans are a wild card threat because of the chip-on-the-shoulder attitude Bush has instilled.

"We're going to simplify so our guys can play faster."

Interesting that he never uses the "B" word: blitz. An attacking defense is not necessarily one that blitzes a lot. The Titans, for example, have a very aggressive defense, and they are not a blitz all the time defense. 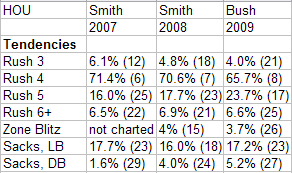 - Football Outsiders, 2008-2009-2010, on the lack of a difference in the basic tendencies of the defenses of Frank Bush and Richard Smith.

Right. It's Richard Smith turned up to 11 when 10 was little more than a loud whisper.

After the jump, I'll actually write my own words.

Frank Bush very well may have boosted the defensive chemistry and speed of his unit by simplifying the defense. I don't want to deny him credit for his role in turning the abysmal Texans defense of 2008 into the mediocre Texans defense of 2009. But by every underlying piece of evidence we have, whether it's the lack of any major shift in the rush numbers/zone blitz/non-DE sack numbers, the correlation between the run defense getting better and the insertion of Bernard Pollard, Shaun Cody, and Glover Quin into the regular lineup, or the startling 0.6% increase in the team's Adjusted Sack Rate from 2008 to 2009, Frank Bush's schemes don't seem to have any real effect on the improvement of the Texans defense. I'm not saying the man is a bungler; after all, he did figure out after those first three games that what he was doing wasn't working. He did get the best players onto the field. These things have value over say, someone who starts Anthony Weaver and Travis Johnson every game of every season because they have contracts that say that's what they should be doing. I'm just saying that schematically, nothing really seemed to change.

As others have pointed out in the past, the Texans defense seems to try to walk a tightrope between Cover 2 and the 4-3 under. The linebackers are too skilled and tall to be Cover 2 "guys", but the tackles are too light to hold the nose in a 4-3 under. The base formation is the 4-3 under, yet Bush seems to play just as much zone defense as his predecessor, despite the secondary performing markedly worse whilst doing it. When the Texans played the Colts, they didn't even bother with the 4-3 and went straight to Cover 2 Shell for the entire game. Paraphrasing from a CBS dropped quote during one of the Texans-Colts games last year, Reggie Wayne essentially said something like, "You know what you get when you play the Texans defense, so I'd rather play them." Ouch. (note: I wrote this before TexansDC's entry went up, I don't care that you're seeing it twice. It's a damn good quote.)

So I looked at these tendencies and thought, "Well, okay self, what does a good 4-3 team's rush chart look like?"  I went to Football Outsider's defensive DVOA ratings. My line for an average defense was +5%, which usually was right around the point that the league split in half. Give or take a few teams. I decided to value consistency over raw stats. So I decided to find the 4-3 teams that have been average or better over the past three seasons, which is an eternity in the NFL. We had five qualifiers: the Carolna Panthers, Indianapolis Colts, Washington Redskins, Philadelphia Eagles, and Minnesota Vikings. 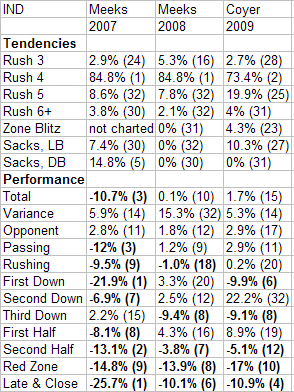 The Colts run perhaps the purest version of the Tampa 2 in the NFL at this point. They send four at you just about every play, get great pass rushing guys up front, and fill the rest of the field with speedy backs and backers that can catch up to skill players. I'm not saying it's the prettiest thing in the world, and it's always been "bend but don't break", but it has a track record of being consistently solid. 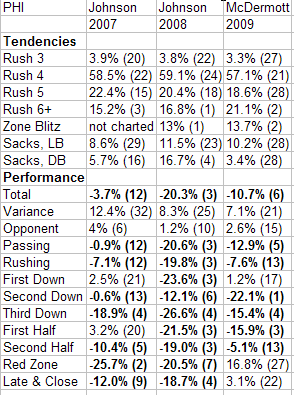 On the other end of the spectrum, Jim Johnson and his disciples have made a habit out of sending 6 or more rushers every time they get a chance to. It's been effective, as you can see. The Eagles have the best combined three-year DVOA of any 4-3 team on the list, and they have a philosophy that focuses on big zone blitzes to destroy drives. 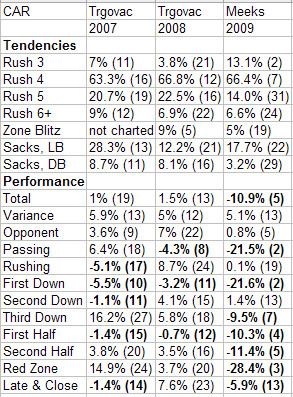 Carolina routinely was a league leader in sacks and zone blitzed a lot during the Fox/Trgovac era. They hired former Colts defensive coordinator Ron Meeks before last season, and the defense underwent a total sea change, going to his Tampa 2 roots. 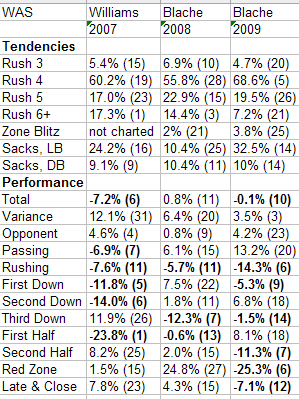 Under Gregg Williams, the Redskins had their best season in the last three on the back of a tidal wave of big blitzes. Greg Blache ran very much the same defense in the next season, but he slowed down big time last year, putting up a chart that was very Bush-esque. 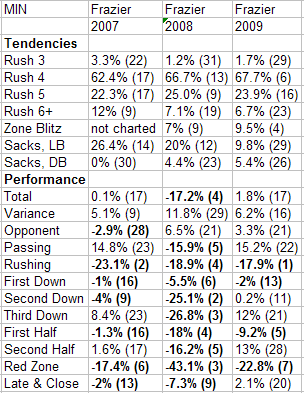 The Vikings, under Leslie Frazier, have what I would call the most similar scheme to Bush's Texans. Frazier advertises it as the Tampa 2, but it has a lot more aggression than a typical Tampa 2. Note that the Vikings have had some really impressive defensive talent over the past couple of years, and according to FO, they've wound up being mediocre two of the last three years. Also, take a gander at that run defense and how it's been consistently excellent thanks to the Williams Wall. Frazier has a lot of rope to work with as long as those two are patrolling well. (insert nose tackle whining here). To think, I once championed this man to be the third head coach in the history of the franchise. Yikes.

So looking at the trends, out of the five best defensive units that these five consistent 4-3 teams have fielded over the last three years, four of them had big blitz or Tampa 2 tendencies to an extreme. The other, the '08 Vikings, might have had one of the most talented units of the decade, and they still finished only fourth overall in defense for the season. The findings seem pretty conclusive, or at least as conclusive as you can be when you have this small of a data size:  Better defenses have a focus. Perhaps, like a pitcher, a defense is better off focusing on its best pitch, then letting the changeups really catch the offense off guard?

Am I here to say that this one year conclusively proves that Frank Bush is a terrible coordinator? No. He was dealt a pretty bad secondary and a half season of having to hide John Busing. Obviously sacrifices might have had to have been made for the sake of avoiding the big play. It's not as cut and dry as "this defense was held back by this scheme", because a good coordinator knows how to tailor his scheme around the team that he has. This might have been a situation where the talent was so dire that Bush simply had to shell up and hide. Looking at these other 4-3 rush charts and how things have changed, I'm sure other coordinators have faced the same sorts of challenges. I'm okay with that. I'm not trying to draw firm conclusions with my small sample size here.

The problem, for me, is in two of the quotes I've mentioned: Bush's quote in the opener about simplifying, and Wayne's quote about how he'd rather play the Texans because you know what's coming. This is the biggest issue with the defense to me:  It's just not complex enough. Blitzes were painfully simple, and when the Texans actually did throw a zone blitz in, opposing teams practically pooped their pants. If we're a vanilla defense that has a focus, that's fine. If we're a crazy defense that keeps opponents guessing with formations, that's also fine. But if we're a vanilla defense without a focus, that doesn't get us anywhere.