Since I have no ability to write any sort of substantive post about the Texans without external aid, I've resorted to video games as my answer. Correct, I will be writing about staring mindlessly at a T.V. screen. Don't lie to yourself; you do it everyday.

Most video gamers who have any interest in football own a copy of Madden. Most likely, multiple copies from the past four years or so since the game hit the next generation consoles. While not truly realistic in its presentation, it's the closest thing to putting yourself in the shoes of Andre Johnson. Or, as you'll soon find out, Dorin Dickerson.

What better way to predict the Texans weekly match-ups than through Madden? This is the first of what I hope to be a weekly fixture of pre-game predictions from the holy game itself. Today's game is of course against the Redskins.

Here's a quick snapshot of the system preferences I play on.

System: X-Box 360 (forgot to turn on HD for this game, my apologies)

Game: Madden 10 (fear not friends, updated rosters are in place)

Quarter Length: 6 minutes (much longer than you think for those non-Madden fans reading this)

Take the morning jump to find out how we fare against the ones they call the Redskins (hint: crush)

The beginning of the game and the first half in general was the opposite of what the rest of the game would turn out to be. Mario Williams was immediately flagged for an offsides penalty. Didn't matter though, as Donovan McNabb and the Redskins quickly turned in a nice three and out. Decent start until Schaubby got hurt. With 3:30 left in the first quarter and no score, Haynesworth tore through Chris Myers and smashed his 800 Ib. frame onto Schaub. Given his past of fluke injuries, I was fearful this would knock him out of the game and the Texans would have to rely on ballroom dancing Matt Leinart to lead the Texans to victory. Schaub only missed a play.

He returned with a bang and with 2:50 left in the first quarter on a fourth goal at the two yard line, running into the end-zone for a score on a play action boot leg! 7-0 Texans.

Time goes by, the Redskins go nowhere and eventually the Texans get into position for a 44 yard field goal from Neil Rackers that's right on the mark. 10-0 Texans. The score would remain that way until the end of the quarter. Not a bad quarter, all things considered. Oh how things change from here on out.

Even the second quarter started poorly, with Eugene Wilson dropping an easy pick in the middle of the field and Schaub throwing one to Carlos Rogers looking for Andre Johnson with 5:21 left in the second quarter. The Texans were in need of a boost, someone to spark them. 'Dre is the logical choice for that role, right? Wrong. Dorin Dickerson, welcome to the NFL.

After a Wade Smith holding call, the Texans were facing a 3rd & 20. with 4:03 left in the second. Starting from the slot and running an out route on the sidelines, Dickerson catches a pass between two defenders, breaks free, and runs 83 yards for the TD! 17-0 Texans. 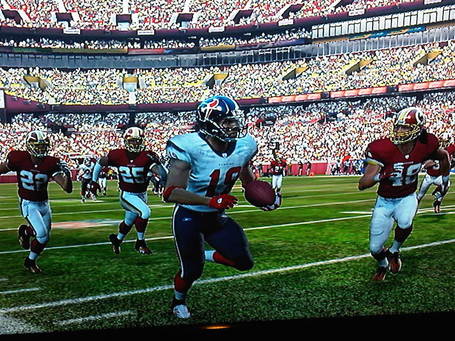 Super Mario, who terrorized McNabb throughout the day, started to make his presence known when, with 3:19 left in the second, he forces a fumble from behind on a short McNabb scramble. Clinton Portis can only express agony at this point. This is only the beginning for McNabb. 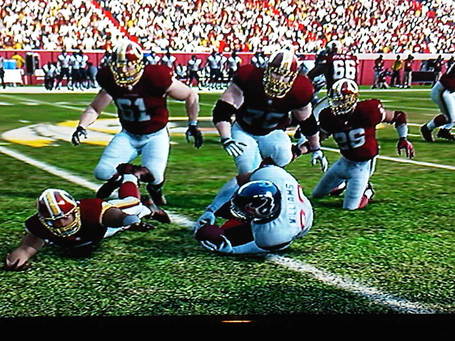 Schaub faces a 3rd and 10 with 2:52 left in the half, needing to capitalize on the timely turnover. Who does he turn to? Why, none other than the amazing Dorin Dickerson. Seriously. The Texans go with the same play that got him a TD on the last drive and manage a 49 yard pass play! Dickerson clearly deserved another touchdown, so Schaub looked for him on the next play at the Redskins six yard line and found him in the corner of the end-zone. At this point, I'm in as much disbelief as this poor Redskins corner, who obviously sucks. 23-0 Texans. 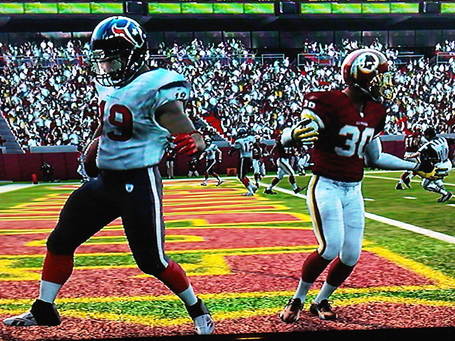 There's still time for the Redskins to create some momentum going into the half. Not so fast. Mario sacks McNabb on their first play back on offense. The look on McNabb's face is priceless. 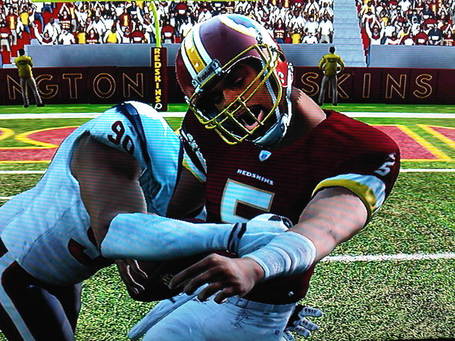 But Mario isn't anywhere near done. And while he didn't get another sack, he heckled the new Redskins QB on nearly every play, including this gem on that drive. McNabb actually resorted to the fetal position. It makes me smile. I'm sure Mario did too. 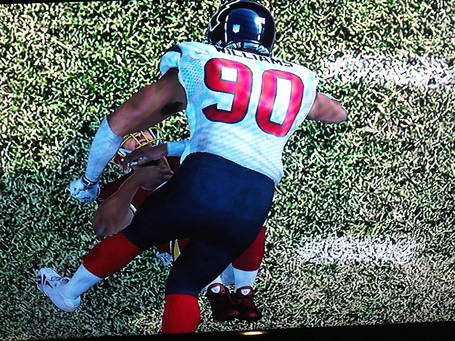 Needless to say, the Texans get the ball back on offense. With 0:58 left in the half, Schaub throws to Dickerson again for a long touchdown! Only to have it called back by a Mike Brisiel holding... bastard. And so the half ends with the lead still 23-0. The scoring wouldn't stop. Nor would McNabb's shitstorm of a day.

The third quarter had its sprinkle of problems. With 4:08 left in the quarter and after a nice 12 yard gain on the ground, Arian Foster rekindles his Tennessee Volunteer days and fumbles the football, only to have Jacoby Jones recover it. Irony. Schaub would later finish off that drive, which featured a primarily ball control offense, with a play action bootleg to Owen Daniels for a touchdown. 31-0 Texans.

The Texans get the ball back (of course), but Kevin Walter proceeds to fumble away a catch. The Redskins finally put together a drive all the way to the Texans two yard line. They're stopped short of the end-zone on three straight plays but have an easy field goal kick lined up with a 4th & 4 to go. False. Their kicker shanks it and hits the right goal post. How bad can it get?

With the game nearing its end, Bernard Pollard feels no reason to stop and decks Santana Moss to break up a pass at the 1:34 mark in the fourth quarter and knock Moss out of the game. He wouldn't return. Ouch. 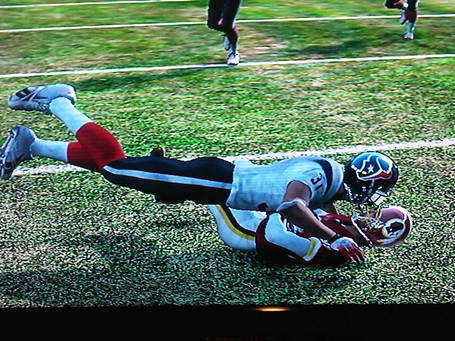 Just a few seconds later at the 1:17 mark, Kareem Jackson gets his first career interception and takes it back to the house for a 52 yard pick six! 38-0 Texans. This is what you call jumping a route. 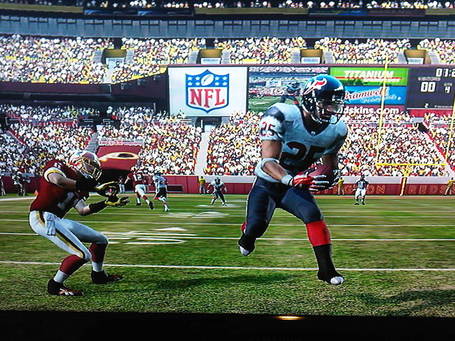 The Redskins get the ball back for one final drive, perhaps to give themselves something to look forward to next week. It gets ugly fast with a horrible sequence of events for Donovan McNabb and one of the coolest I've ever seen. Demeco Ryans sacks him using one arm to throw him down and then kicks him in the end to rub it in. Domination at its finest. 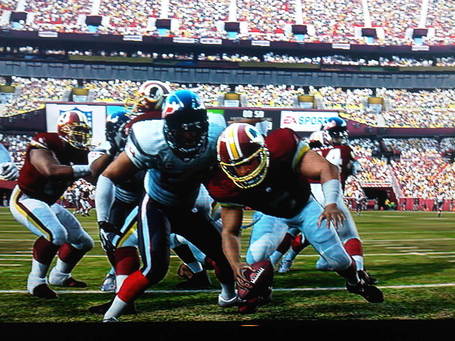 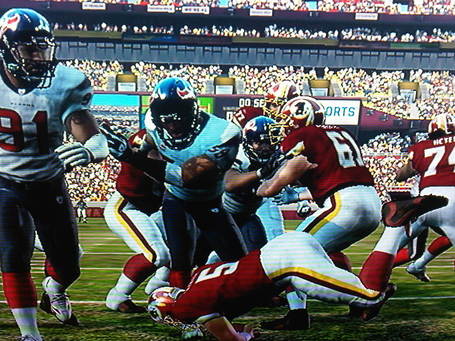 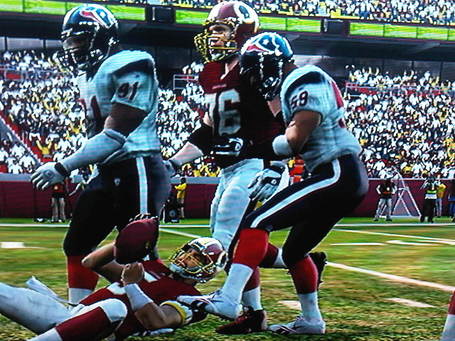 And with 15 seconds left, Neil Rackers adds icing to the cake and nails one more field goal. The final score reads 41-0 Texans. Utter domination. This picture pretty much sums up McNabb and the Redskins' collective day. 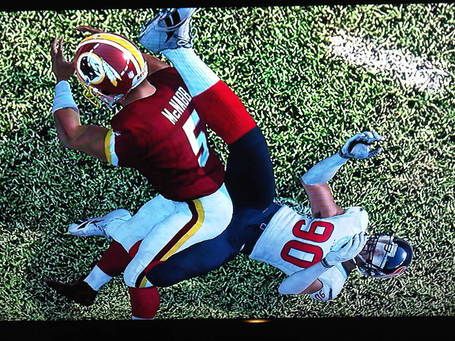 Final stats for some notable Redskins:

Final states for some of your Houston Texans:

So there you have it. The Texans will destroy the Redskins this week. Or so says Madden. Let's hope the team can perform at even half the level of their virtual counterparts. If they do, this will be an easy road victory.