Share All sharing options for: ARGH! MY EYES! MAKE IT STOP!!!: A Retrospective on Steve Slaton qua Kick Returner

By the time Steve Slaton brought the last kick out of the end zone on Sunday, I started to wonder if I was the unwitting victim of an elaborate practical joke.  (That I assumed an entire game would be played to set up and execute the practical joke says things about my over-inflated sense of self that I refuse to further acknowledge, so save it, Carl Jung.) 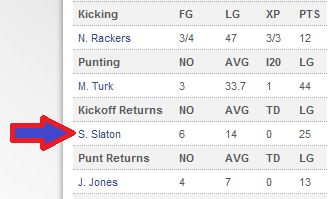 Time for some fun with these numbers (fun being relative, of course) and some ideas about who else might be capable as a return man.  So pack it up, pack it in, and jump around to read the rest.

If Slaton's only sin yesterday was making a couple bad decisions on which balls to return, however, I probably would not be writing this post.  Because, let's be honest, it's not like I trouble myself to write a lot of extra material around here.  No, worse than Slaton's production (or lack thereof) was his actual performance during the returns.  The first return, with the inexplicable "catch running toward the sideline, pause, hop out of bounds at the one" was the most glaring miscue, but it was hardly the only one.  Let us not forget the wonderful "run into the back of your own teammate and fall down at the 15" to start the second half.  Nor should we overlook the complete lack of field vision, which Rivers touched on last week (in the context of "look how much better Arian Foster's vision is than Steve Slaton's).

Yes, yes, I am aware that Slaton had a big 33-yard return against the Colts.  My question for you is whether you think that one return or the six (seven, if we count the muff ... and we should always count the muff) returns we saw Sunday is the more accurate representation of Slaton The Returner?  Because, to my eyes, there was not one return Sunday where it looked like Slaton was a danger to do anything other than harm the boys in Liberty White.

I hear your question.  "Well, then, smart guy, if not Slaton, then who should be returning kicks?"  You shouldn't take that tone with me, Johnny.  My mother took that tone with me once.  Once.

A quick glance through the roster doesn't show a ton of options from which to pick our return man, which is probably a big reason that Slaton has the job in the first place.  That said, I can think of a few options, to wit:

Jacoby Jones.
Pro:  Jakespeare is fast, explosive, dynamic ... all the things you want from a return man.  He also has experience, with 24 kickoff returns for 638 yards (including a 95-yard TD) in 2009, 13 for 280 in 2008, and a handful in 2007.  Con:  Every time Jones returns a punt (or, last year, a kick), every Texans fan watching holds his or her breath and prays that Jones does not fumble.  He has a tendency to hold the ball as if it was against the rules to let the football touch your torso.  He is also theoretically going to see a larger role in the passing game this year, which, when combined with his punt return duties, might make being the full-time kickoff returner too much to handle.

David Anderson.
Pro:  Good speed (unofficial mid-4.4 40 time), good hands (no career fumbles), some experience (3 kick returns in 2006).  Also, federal law mandates that I refer to him as "gritty" and/or "scrappy" right now so that we are all aware that he is white without any of us having to say it.  Should he score a TD, we'd likely see a return of the Conan Dance, which is nice.
Con:  Not exactly what one would call "explosive," and not really built to take a lot of big special-teams hits.

Chris Ogbonnaya.
Pro: Umm ... decent size/solidly built, has good hands, and shows some shiftiness and good vision in space, at least in college:

Con: Currently on the practice squad, so we'd have to make room for him. He also doesn't have the breakaway speed to hit a seam and leave people behind, and has no track record as a returner from which we can guess about his abilities.

I saved my favorite suggestion for last (and a h/t to Kerns for mentioning it first)...

Dorin Dickerson.
Pro: Big, explosive (4.4 speed), good acceleration, has the strength to break tackles and enough shiftiness to make people miss in space.  Described at the combine as having "total body control."  Plus, I won't lie, I get kind of giddy at the thought of him running over some backup corner on the coverage team.
Again, this is college, so take it with a grain of salt, but the first play in this video makes me a happy panda:

Con: We have no idea if he can actually do it. Umm ... yeah, that's pretty much the only reason against it that I can see.

So, what say you, BRBeings?  Two questions here, of course: First, do you think Slaton can be a good return man and should accordingly keep the job?  Two, if not, who would you like to see replace him?