Wherein bfd Delivers A Fisking To A Matt Mosley

Share All sharing options for: Wherein bfd Delivers A Fisking To A Matt Mosley 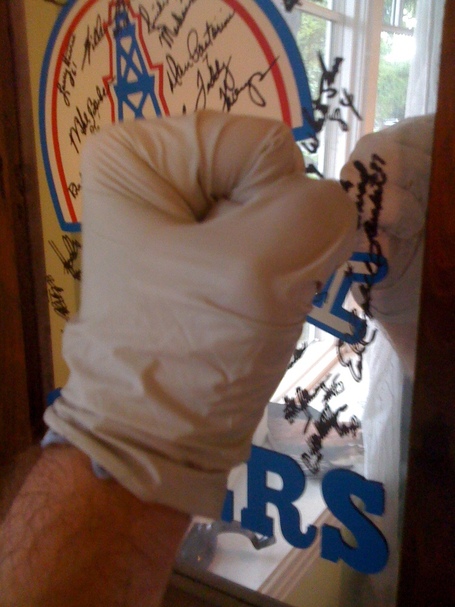 Join me after the jump as I present the execrable Matt Mosley with the terrifying "Fisk of Death."

Yes, that is a picture of my fist in front of my vintage Houston Oilers "autographed" mirror.  Can you feel the machismo?  No comment on having a glove like this handy.  But that's not the point, is it?  The point is to fisk Matt Mosley back to the Stone Age, from where his feeble mind has failed to evolve.

IRVING, Texas -- Like it or not, the Houston Texans  are still looking for validation that only comes with playoff success. They opened Reliant Stadium with great fanfare and a win over the Dallas Cowboys in 2002. But No. 1 overall pick David Carr was ultimately a bust and the organization traded for a Falcons quarterback who had languished behind Michael Vick.

OK, Matt, I'll give you the first part...to a certain extent.  As MDC mentioned just last week, we are an expansion team.  And since we came into the league in 2002, your America's Team, the Dallas Cokeboys, have won precisely how many playoff games?  I'll give you a hint:  It's only one more than the Houston Texans, just last year against the Philadelphia Eagles in a Wild Card game.  Otherwise, Tony Romo = FAIL (since we can't post certain pics here, I think a picture of Romo's holding abilities below would do nicely).

Houston has always had an inferiority complex to Dallas based on its lack of non-chain restaurants and the 610 loop to nowhere. There's reportedly something called the Governor's Cup that is on the line each time the Texans and Cowboys play in the preseason, but no one's seen it in years.

Wow, went right for full throttle stupid from the second paragraph.  Look, I'm not even going to try and defend Houston's outstanding cuisine reputation.  I will say, however, that I enjoy food from throughout the world.  Heck, as Diehard Chris can attest to, I am especially attached to Vietnamese and Thai cooking, in addition to...well, I'm fat for a reason...in addition to pretty much everything.  Seriously, if you've only seen chain restaurants in Houston, it's likely because you can't figure out how to get off the freeway.  I'm shocked you can find something outside of an Olive Garden in that culture-less mecca known as Dallas (hint: Plano does NOT count as culture).

Because, I guess, the "610 loop (sic) to nowhere" confuses you.  Here's how it works.  Does a circle have ends?  No?  Is a loop a circle?  Yes.  Does a circle, thus a loop, go anywhere?  Why, yes, along its circumference.  When you were on 610, did you just drive around in circles, unable to exit?  Evidently, circles vex you, which is why I'd recommend never leaving your house again.

But let's get back to Dallas, shall we?  Oh, the land of big hair, bigger SUVs, and biggest egos.  What other city would be so arrogant to call it's football team "America's Team."  Yes, of course they're America's team.  We all are well known child molesters, coke dealers, and murderers.  Yep, you've got America pegged, Dallas.  Way to represent!

On Wednesday, I asked Cowboys rookie Dez Bryant  if he was familiar with the Governor's Cup. The Lufkin, Texas, native responded with a blank stare and then resumed telling me why Oklahoma State was going to beat Texas in Austin this season. I then asked Martellus Bennett, a Houston native, what he thought about this storied rivalry that features a game every four years.

And just when I think you can't say something even more asinine, BAM!, you up the ante.  You do realize your Governor's Cup analogy cuts both ways, right?  What I find most entertaining, though, is that you went to Dez Bryant and Martellus Bennett as your sources for this part of your hilarity.  I think you would've received an equally clueless response from this pair had you asked them about quantum physics (oddly, Marty B. knows about turtles all the way down, but he thought it was about layering strippers at Club House).  But, congratulations, you further proved that Bryant and Marty B are morons.  Well played.

"I'm a Houstonian, but I didn't grow up rooting for certain teams," Bennett said. "But I've always been a fan of [Texans receiver] Andre Johnson, so maybe that counts for something."

Anybody want to bet Marty B. didn't know who AJ was before this week?

On a dry erase board outside the locker room, Bennett has requested 20 tickets to the sold-out game for friends and family. He said he had to represent "S.W.A.T.," which stands for Southwest Alief Texas, Bennett's old stomping grounds. He plans to invite 16 of his teammates to his mother's house for red beans and rice Saturday night, but Miles Austin will be left off the list.

"I won't let Miles go because my little sister likes him," Bennett told me. "She wanted to know if he broke up with Kim Kardashian the other night, so I put her on the phone with him."

What in THE hell is your point?  Your thesis, as stated in your title, is "Face it: Houston has an inferiority complex."  Does Houston have an inferiority complex because Marty B's sister likes Miles Austin?  Oh, wait, you might have a point here.  That's pretty embarrassing considering Miles couldn't carry Kevin Walter's jock, much less Andre Johnson's.  Your win.

Cowboys fans don't really distinguish the Texans from any other AFC team. This is the most important game of the season based on the fact an 0-3 record would be nearly impossible to overcome and likely cause Wade Phillips to tell more random stories about Hank Stram and Jack Buck during news conferences.

Dude, they're Cokeboys fans and still think it's 1995.  They don't understand the Texans exist not because we're not noteworthy, it's because they still think Jimmy Johnson is the head coach.  Much like my athletic career, Cokeboys fans live in the past - always - because the future under Jerrah just isn't too bright, is it?

At 2-0, the Texans can afford to lose this game and still be in the thick of the AFC South race. But that's not something linebacker DeMeco Ryans  wants to hear right now. He apparently became sick of all the questions about the Cowboys and wanted local reporters to focus on his team. I wish I had the audio to go along with this quote because it might have some Herm Edwards "we play to win the game" quality.

Hey, know why Cap'n 'Meco is pissed?  It's because of crappy journalists like you writing crappier articles like yours, that's why.

You: DeMeco, your team has started off 2-0, but Tony Romo kicks ass, right!

You: (thinking - DeMeco clearly has an inferiority complex)

Is that about right?

The Cowboys will face one of the most "enhanced" organizations in the league Sunday afternoon. Left tackle Duane Brown  trotted out the tried and true "didn't read the label" excuse for his violation of the league's policy on performance-enhancing drugs (PEDs) and linebacker Brian Cushing  apparently worked out so hard that it caused a female fertility drug to show up in his bloodstream. As far as we know, he's not showing yet. This is one of the reasons I avoid weightlifting in general. I've always suspected that the military press could open the door for HCG.

Ohhhhhhh.  I see what's going on here.  By enhanced, I'll just assume you saw Kevin Bentley and his "Lyndon Veins Johnson" in the locker room.  It's OK, Matt.  I'm sure your wife/loved one/significant other/filipino tranny love you just the way you are.  *snickers*

It's either this, or it's some already boring cliche about two Texans getting busted for...and let me get this straight for you so you don't fluk it up again...NON-PED USE.  We get the joke.  Hilarious.

As a Texans fan, here's what I've realized:  You cannot move beyond stereotypical mainstream media tripe, convinced it's your job to shape the message rather than report the story.  I've realized you are completely ignorant about the City of Houston, the Houston Texans, and football in general.  Finally, I've realized you are to humor what a chainsaw is to LASIK.

Have a pleasant afternoon.