The Morning After: A Rational Look At Yesterday, Eugene Wilson, & Frank Bush

Share All sharing options for: The Morning After: A Rational Look At Yesterday, Eugene Wilson, & Frank Bush

After wins, I usually have done a write-up for the game's unsung hero, but this is not a glorious Monday morning. It's hard to immediately look at a loss rationally after your team completely lays an egg. The morning after? Well, that's the time to begin looking at the flaming pile of wreckage behind us and begin our turn towards the next Sunday.

Firstly, the Texans did what fans asked of them - they had a winning September. They won two out of three September games so there will be no scrambling to make up for a bad start. Yes, they completely sucked yesterday, but at least the loss came in a non-conference, non-division game. The Texans are 2-1 with Oakland next. Houston is where we had hoped thought it would be, so the sky is not falling right now.

Also, starting left tackle Duane Brown missing the game didn't hurt the offensive line too badly. Rashad Butler did an admirable job on Dallas OLB DeMarcus Ware. Yes, the stat sheet shows Ware with three sacks, but Texans QB Matt Schaub held onto the ball entirely too long thanks to good Dallas coverage. There's also the fact that the Texans matched TE Joel Dreessen on Ware at times - this led to one of the Ware sacks. Butler made some second level blocks and stuffed a few Ware spin moves. If anything, the Texans should've run more draw plays to the left to slow down Ware's rush, but hindsight is 20-20. All that said, Butler proved to be an adequate left tackle and should be fine through the next three games.

That said, silver linings, however slight, will only go so far when the game was filled with many disappointing performances. The post-game write up has pretty much everything that went wrong, and I think, despite the immediate post-game state of mind, it's still fairly accurate. There were a lot of execution errors, and the team just looked like it didn't care. However, I feel compelled to expand on two contributing factors to the loss. After the jump, the spotlight is on Eugene Wilson and Frank Bush (no, that doesn't mean the defense is solely to blame for the loss, but the offense isn't going to look that bad every week) because there are some things that need to be said.

The first area of discussion is our starting FS Eugene Wilson. The fact that Wilson is still starting is a complete joke. After three weeks, it is obvious that there is absolutely no logical reason for Eugene to be starting.

The young secondary needs his veteran presence? Not really. They have given up 1,106 passing yards in three games. It really can't be any worse. Plus, Gary Kubiak, in his reasoning over the release of Jacques Reeves, said that they were going young in the secondary so why is old, injury prone Eugene Wilson starting? It certainly isn't his on-field performance.

If you haven't seen his on-field performance then let's catch you up. Every week, Eugene misses three or four tackles, is late in providing help in the deep zone, drops an interception or two, gets fooled on play action, and gets beat deep because he's zombie slow...when his job is to be the deepest man on the field.  Seriously, this is what earns a multi-million dollar contract and starting spot? It's time for a change because the secondary is broken and needs a spark.

The Texans need to truly go young and give the faster, more athletic Troy Nolan a shot against Oakland. After three straight weeks of bad performances, it's time for the stone-handed zombie, otherwise known as Eugene Wilson, to hit the bench and stay there. Honestly, I'd rather cut Wilson because he's been that bad, but I'll settle for him sitting on the bench for the rest of the season. Is Nolan the answer? Who knows, but I know that Eugene Wilson isn't. He deserves to be benched.

Moving away from Wilson as wide receivers tend to do on Sundays, it's past time that defensive coordinator Frank Bush does something to plug the constantly exploited hole in his defense. Let me use a visual aid to show the Cover-2 Zone defense. 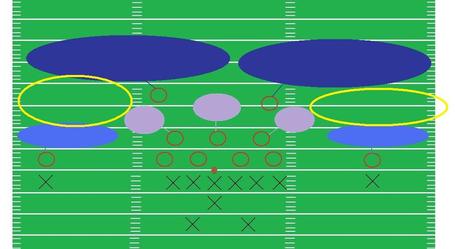 You see those two yellow rings on that picture? The hole exists right between the cornerback's flat zone and safety's deep zone.  Indianapolis, Washington, and Dallas have all picked on those two holes in the scheme. It's not bad defensive play per se, but it's just a flaw in the scheme which can be exaggerated with smart play design to occupy the safeties and corners. Heck, let's see a play that could exploit that hole if a quarterback has time to throw. 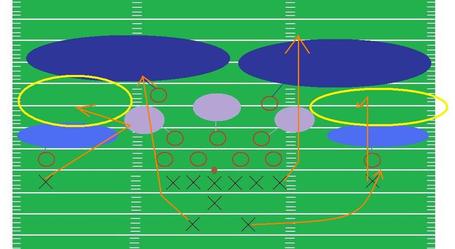 The Cover-2 Zone is defeated with the routes (in orange). The outside linebackers are delayed just enough by the go routes, one cornerback is pulled away by the running back to his flat zone, and I can hit the receiver who slips between the distracted safety and cornerback who thinks that safety has the receiver behind him. As long as the quarterback has time to throw, that receiver will be there all day - especially if the safeties and linebackers aren't reading the play or quarterback.

We've now seen three weeks of plays similar to this one. Three weeks of commentators talking about those holes in the zone. However, Frank doesn't change the look or disguise it in anyway. Frank just goes back to the same basic scheme with no adjustment as if the holes were a fluke.

These holes are nothing new as this was written about during the summer. Frank, the questions I ask you are - How can you be surprised that coordinators are finding and exploiting these holes? We know the holes are there and people are attacking them, so why aren't you doing something to exploit what we know about their gameplan? At the very least, why are there no adjustments to fill that hole which will force teams to change their own plan of attack?

Oakland is next, so hopefully the Texans can show up and act like a professional football team. Sound off with your tempered, rational observations from yesterday's game. Or rant and rave. Or rip the team's performance. Frankly, all are warranted after yesterday's game.