Share All sharing options for: Tape Study: Cowboys 27, Texans 13 -- A Heartbreaking Work Of Staggering Suck (I)

You may have heard somewhere that this was a closer game than it looked; it wasn't.

The good news is that it was just one game. The bad news is that this was the collective sum of all of the fears the Texans possibly could have faced. You may have heard about the pass defense being terrible; that's a fact. You may have heard about the offense putting up its fewest points since the Jets debacle in Week One of last season (and, by the way, the Redskins hurried and sacked Schaub more than the Jets did in that game). But it wasn't just that.  It was also the overpursuit, the run defense failing, the red zone offense completely falling apart, Steve Slaton's existence helping the Cowboys, and a total lack of in-game adjustments on either side of the ball. Oh, right, and the Cowboys left about 100 yards of total offense on the field due to uncalled penalties on the Texans and stupid penalties on themselves. In the first half.

There are two bright sides if you pull for the Texans:  One is the small sliver of hope found in the performances of Rashad Butler, Arian Foster, and Jacoby Jones yesterday. The other is that so much went wrong with this game that there is no way I can possibly break down everyone who sucked, so someone will be spared.

I want to leave the secondary behind for the most part (like every wide receiver we've faced so far) and focus on the offense and the run defense. We'll talk about Eugene Wilson, Owen Daniels, the run defense, and the red zone "offense."

It came to me when I was charting the first half that I could probably make a whole post of Eugene Wilson's suck. I don't think I have quite enough pain tolerance for that though, so let's look at two specific first half plays that he bungled. The first one directly led to three points, the other one would have led to seven if Dez Bryant hadn't stepped out of bounds.

The last actual football play of the second half involves the Texans bringing on the quintuple uber-deep zone for some reason, probably because they wanted the Cowboys to score three points. Jason Witten was inexcusably left wide open on the sideline and caught a fourteen yard pass to put the Cowboys in field goal position. Who was the defender on that play, coming in late? You guessed it!

Boy, I'm utterly astonished that Wilson, playing "safety", couldn't make a play on that ball. It's almost like he has no range. Or reason for being on the field.

The other play, as I think you might have guessed, is the Dez Bryant touchdown that was called back for him being out of bounds. That's fine and good, I don't blame Kareem Jackson so much for this play because he knew he forced Bryant out. But look at Wilson's tackle attempt:

Here is what Bryant saw: 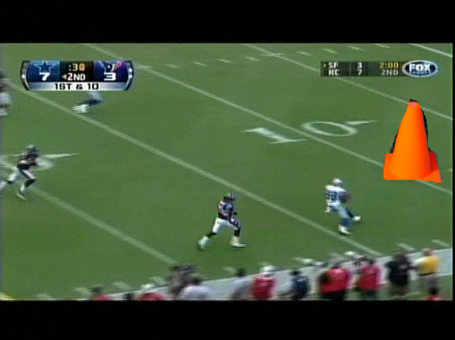 Just disgraceful. And the dropped interception and bungled help on the slant to Roy Williams where Jackson falls down mean that these two awful plays are not even among his two worst of the game. If Wilson starting is some kind of sick joke on Texans fans, then this has reached Carlos Mencia levels of unfunny. Troy Nolan. Now.

I'm not saying that Daniels is never going to make it back, and I'm not saying that he's not heroic for trying to gut it out, but he simply isn't helping the Texans right now. He caught three of seven balls against the Cowboys, knocking his numbers up to six for fourteen on the season. None of those catches have been downfield, and when he has caught the ball, he hasn't been able to evade even one tackler. More importantly is that his incompletions, like this one below:

...show a theme of Schaub having to fit the ball in an impossible angle due to how tightly he's covered. Obviously we're all pulling for Daniels to recover his past form, but the question remains:  How much longer can you let him recover on the field when Joel Dreessen and James Casey have shown more than him this (off)season? Particularly when the safety valve of the tight end is desperately needed considering how hurried Schaub has been?

Drawing up some plotholes...

There were a lot of successful running plays for the Cowboys yesterday. Most of them were draws, but some of them were not. The common factor in all of them? The Texans' interior line getting dominated at the point of attack. This is just a little simple five yard gain, but look at how the Texans' defensive line is almost entirely beyond the right hash before Marion Barber is even up to the line of scrimmage:

That's not even getting into the poor defense on the draw plays. The formula for the Texans defense, coming into the game, was that they'd capitalize on the run defense, pass rush, and penalties to get their poor pass defense off the field. On Sunday, the script fell apart as they couldn't do any of those things on a consistent basis. Hope Brian Cushing is ready to solve a lot of problems when he gets back, and that the Texans somehow find a way to add some pass rush beyond him, because they'll need both to keep the secondary clean.

Jack In The Box.

The Texans only had one red zone appearance in the first half, but judging from how things worked in the second half that I can remember, the Cowboys seemed to have the same plan both times:  Stuff the line and send pressure at Schaub. It worked. Easily. Here is Jay Ratliff beating Chris Myers off the ball (possibly to the point of offsides, but I won't complain about that here) and forcing Matt Schaub into a terrible throw.

In general, the Texans did a much better job at getting their screen game involved against the Cowboys. They ran three separate ones in the first half and got two pretty decent gains out of it. But when the Cowboys come to the line with this set and blitz to stop the run and pressure Schaub, I'm sorry, but where the hell is the screen here? Run the trips bunch a little wider and flip the ball out for an easy touchdown instead of trying to be a hero. Instead, the Texans settled for two field goals. They wouldn't have won anyway, but at least the score would've looked more respectable.

Coming Thursday: more fun with the defensive backs, a closer look at Schaub, and a look at the offensive play call statistics through three weeks.