Hello, My Name Is tehGrindCrusher, And I Like To Do Drawrings! Your Contribution Wanted!

Share All sharing options for: Hello, My Name Is tehGrindCrusher, And I Like To Do Drawrings! Your Contribution Wanted!

Football is a violent sport. But that doesn't mean that there is no art in football. Why, not so long ago, MDCelo provided us with a glimpse into his artistic abilities with this spot-on Dada-ist reimagination of ESPN talking head Stuart Scott.

If Warhol taught us anything, it's that anything can be art, from a can of tomato soup to a ham of a TV personality. With that in mind, I thought I'd scour the internets (or maybe the darkest corners of my twisted mind) to come up with some more examples of Texans or NFL-related art. Let's hit the jump and browse through the gallery, shall we?

I thought I'd start with something generally topical. Take a look at Roger Goodell here. 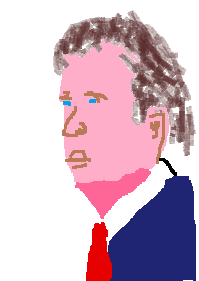 Notice the way Goodell's square jaw frames the upper half of the picture, drawing the reader's gaze to his blue, laser-like eyes. Notice also the way form, color and texture combine to create something slightly synergistic, with a hint of the kind of apathy, or perhaps angst, that could only describe the affectation that accompanies life in the twenty first century? This is a painting that Lucien Freud would be happy to claim.

Next, we come to something a bit more Texans-specific. Gary Kubiak, a man of action:

This work clearly suggests the bold, yet perpetually rakish affection that the artist has for his subject, redolent of Gauguin-era synthetism, with all the emotional baggage that word entails. Stark, yet somehow taken from a vantage that recapitulates the baser forms of post-Impressionism, one can relate somewhat to the affable subject, yet one is left with a wanting, a yearning, as one strives to understand the true emotional depth inherent in this most complex individual. And also to comprehend his play calling in the red zone.

Lastly, let's take a look at something a little different, a landscape scene. I like to call this Unicorn With Outside Linebacker. 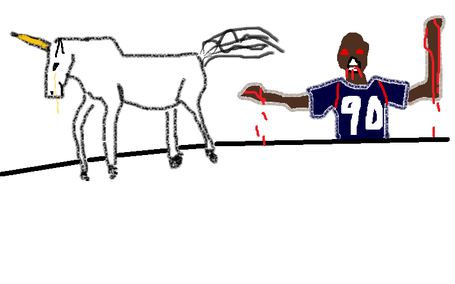 Like me, I'm sure you immediately thought of Reubens when you first saw this. The concentration of the subject in the center of the image, the framing along the top and bottom to draw the eye in are all clearly reminiscent of the Flemish Baroque period. Notice also, however, sentiments that one might not find associated with thoughts of that school - the innocence of the unicorn, its golden tears failing to help in its doomed plight to escape annihilation. The urgency with which the outside linebacker hunts its prey - these images contrast markedly with the more Romantic fare one might associate with the movement and clearly hint at Guernica or some such. We are tormented, wanting to flee in fear, yet somehow aroused and drawn to the painting like a moth to a flamethrower.

Well, gentle readers, I sure hope you enjoyed this brief tour through the Texans internet art world. Would you like to join in? If this kind of thing tickles your fancy, please leave your creation in the comments.

As with any creative endeavor, the key is to put a little bit of yourself into your work. Have at it!