Mini Coupe Power Play: Schaub To Dreessen -- The Awesome Before The Suck

Share All sharing options for: Mini Coupe Power Play: Schaub To Dreessen -- The Awesome Before The Suck

Here's a new weekly segment sponsored by the super cool looking Mini Coupe. The goal here is to highlight one play in the game that was powerful and to highlight the player who was the catalyst for the play.

This brings us to one of the great philosophical questions of our time: Does the play have to be a positive one for the Texans? To me, the answer is no, and since I'm the one writing this, that makes it unanimous. As such, the obvious "victor" for this week's play should be the final one.

Seeing as Run MDC has already done a terrific breakdown of this play, however, I will instead deviate from my previous statement, and break down the preceding play where Matt Schaub and Joel Dreessen connect on a brilliant 34 yard connection setting the stage for the dramatic (though wholly disappointing) finale.

First, let me set the stage. The Texans are facing 3rd and 23 from the Raider 39 after a botched snap and an incompletion. There are 29 seconds left on the clock, and according the Advanced NFL Stats, the Texans have only a 5% chance of winning the game at this point. 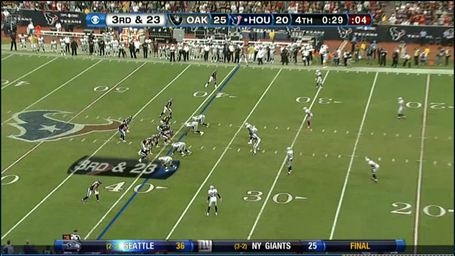 Pre-snap, the Texans have Jacoby Jones wide left, Kevin Walter wide right, Owen Daniels in the slot, and Joel Dreessen lined up at the right TE position. Arian Foster is in the backfield with Schaub. 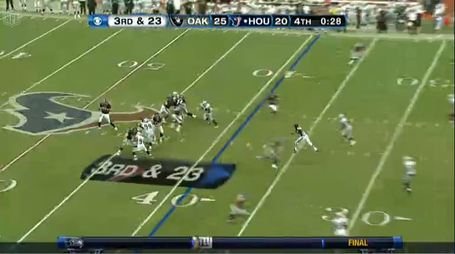 Immediately after the snap, Jones, Walter, and Dreessen head downfield while Daniels runs a short crossing pattern. Foster checks for a blitz, but the Raiders only send four, so he then steps up as a check down. It's hard to see exactly what deep patterns are run, but based on the subsequent events, I'm guessing that Walter and Jones both run straight flys while Dreessen runs a skinny post. 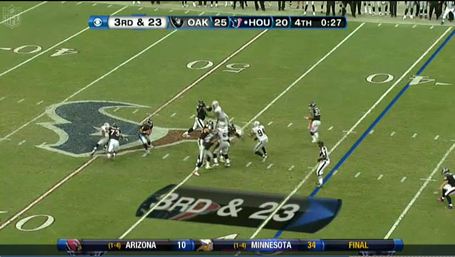 The blocking is pretty solid with most guys being held at the point with the exception of Kamerion Wimbley who is run deep by Eric Winston. This forces Schaub to roll to his right. 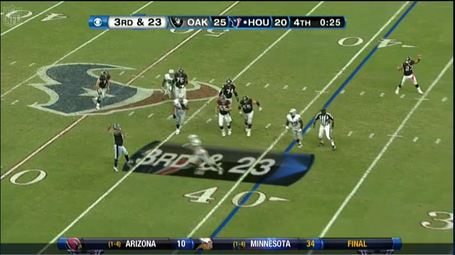 Schaub, still rolling right, throws a nice ball on the run, thus firmly disproving the notion that he cannot throw on the run. 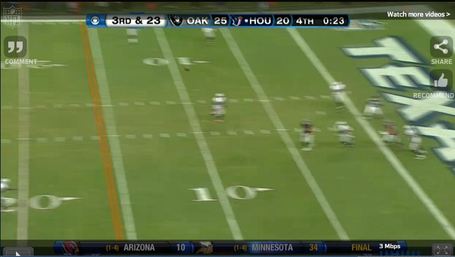 This shot is a bit blurry because the camera is moving, but it's the most interesting by far. Dreessen, the Texan at about the four-yard line, is rolling right with Schaub. This is why I said earlier that he's presumably running a skinny post. He's clearly coming from the center of the field and most likely broke off when he saw Schaub leave the pocket. If only this was a skill that could be shared amongst his peers. In a completely unrelated note, Jacoby Jones is just off the top of the screen decidedly not moving with his quarterback. 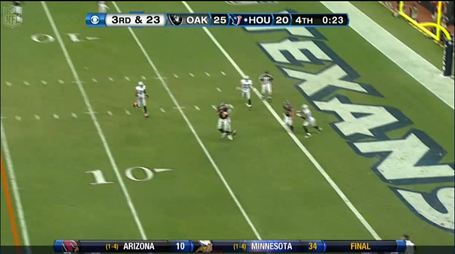 Dreessen, who has also done a phenomenal job of getting in front of his defender, now makes the catch at about the three and a half yard line, completely atoning for his earlier drop. 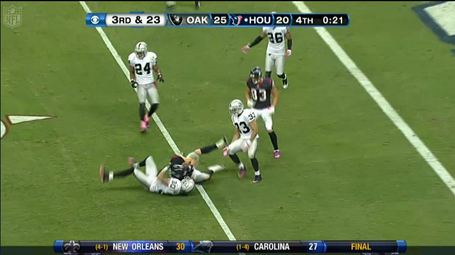 Dreessen is then tackled at the five setting up the final play.

When this play was over, the Texans had first and goal (second and goal after the spike) at the five yard line, down by five. The probability of victory shot from that lowly 5% all the way to 68%, meaning that this play alone swayed the likelihood of victory by a staggering 63%. Sadly, the remaining 32% prevailed.

That makes it the Mini Coupe Power Play of the game and Joel Dreessen's ability to adjust to the situation makes him the catalyst that made it all happen.