It was exceedingly difficult to select the Mini Coupe Power Play this week.  Part of that stemmed from the fact that there wasn't any single play that you could point to and say, "That was the play that cost us the game!"  Mainly, though, it was the simple notion that looking back at the game was akin to reliving a hangover without enjoying the drink.

I thought about going with the beautiful touchdown pass from Matt Schaub to Jacoby Jones, but selecting a positive Texans play from this past game feels like cheating.  It's like bragging to your friends that you won at the blackjack tables in Vegas, but leaving out the thousands you lost at the craps table or the disease you caught from the female professionals.

So for this week's Mini Coupe Power Play, I selected the play that finally broke my will.

Throughout the afternoon, even as my frustration and anger mounted, I continued to hold out hope.  I can't explain it either.  When this play happened, though, what I was hoping would be a celebratory beer faded into a consolatory beer.

The play in question?  Ray Rice's 27-yard run late in the fourth quarter that set up Ricky Williams' touchdown.

Wait, the Texans gave up a touchdown to Ricky effing Williams?!!

Let's set the stage.  The Texans are trailing by five, and if they can force a stop on this drive, it can set up a potential game winning touchdown drive.

It's second and three, and Ravens are already in long field goal range, at the Houston 31, but if you squint hard and spin around real fast, you can still make out a glimmer of hope. 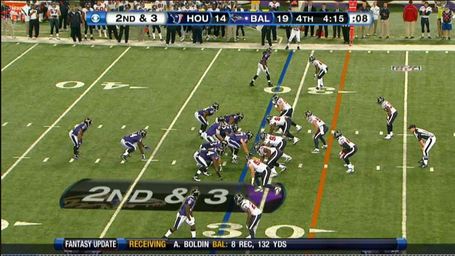 Pre-snap, you can see that the Texans are pretty much in their base formation, while the Ravens are set up in a standard I.  Danieal Manning is playing fairly close to the line in anticipation of a running play.  Just before the snap, Brian Cushing starts sneaking towards the line. 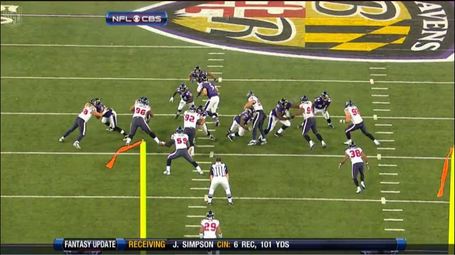 Shifting to the end zone view, we can see that right after snap, Cushing does blitz and actually does a good job of penetrating, but the play is not run in his direction, so he's pretty much out of the play.  Earl Mitchell shifts towards the hole, but isn't able to close it. The two things to focus on here are that DeMeco Ryans is the one in position to close the gap, and Manning, reading run, takes his first steps forward. 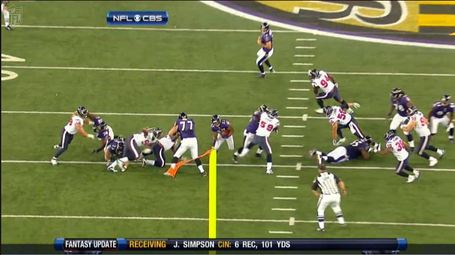 Unfortunately, DeMeco gets knocked out of line by Vonta Leach and since Manning ran straight at the line, he's in no position to pursue. This leaves one man between Rice and the end zone. 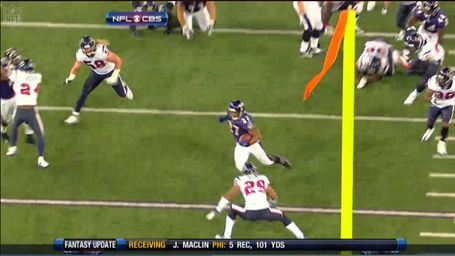 That man would be Glover Quin.  Rice puts a nice move on Quin, who only gets a tip of a shoelace. 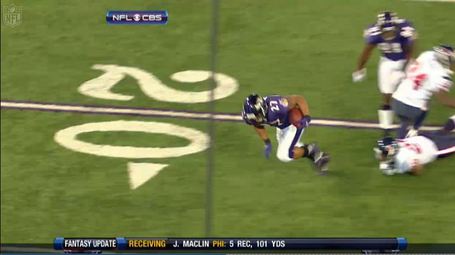 That shoelace trips Rice up a little bit, but he's able to keep his balance.  It probably ultimately saved a touchdown, but we refer to that as a sprinkle of sugar on a pile of poop. 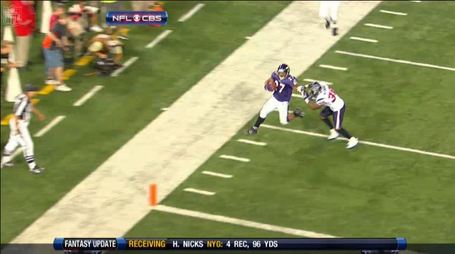 This gives Rice an additional 14 yards before Danieal Manning--and give Manning credit for not giving up on the play-- pushes him out of bounds at the 4.

According to Advanced NFL Stats, this play only increased the probability of victory for the Ravens by 1%, but it was pretty much the straw that broke the drunken camel's back.

The catalyst for the play was our former Human Coke machine, Vonta Leach -- causing me to drink some Vonta bleach.