Mini Coupe Power Play: In A Race Between Arian Foster And A Mini Coupe, The Titans Would Lose

Share All sharing options for: Mini Coupe Power Play: In A Race Between Arian Foster And A Mini Coupe, The Titans Would Lose

In the third week of the Mini Coupe Power Play series, we finally get to select a play that actually helped the team win.

And there are no shortages of candidates.  The big interception by Danieal Manning on a broken leg is one option, as are Brice McCain's pick six, Joel Dreessen's TD catch and a myriad of other plays.

I really wanted to select Neil Rackers' fourth quarter leveling of Mariani (because it was awesome, that's why), but if we're looking for the one play that really powered the Texans to victory, it has to be Arian Foster's 78-yard touchdown reception.

Setting the stage, the game was still a contest at the moment with the Texans up 10-0.  After a nice defensive stop the Texans started the drive at their own 6-yard line.  A few plays later, and they sit at fist and ten from their own 22. 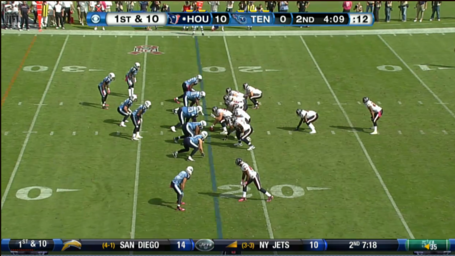 Pre-snap, the Texans are lined up in a 2 TE formation with Bryant Johnson split wide.  The Titans have 9 in the box and are really gearing up to stop Arian.  Good luck with that. 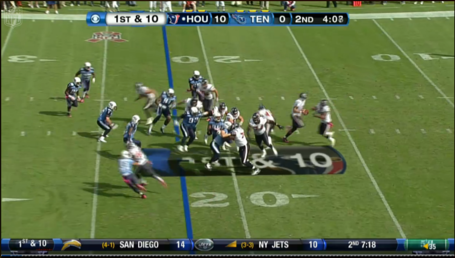 The Texans carry on the fake as they've done so many times.  You can see why they are so good at this.  All the linemen are run blocking, Vickers is lead blocking, and both Foster and Schaub do a phenomenal job of carrying out their fakes.  All nine of the Titans bite hard.  It's obviously the first time they've ever seen the Texans perform such an act. 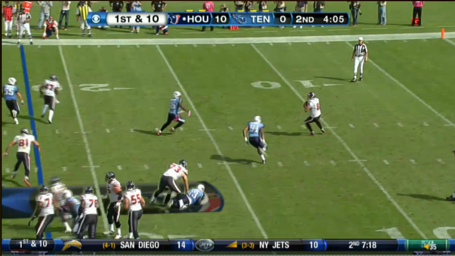 This is the shot that makes the play so beautiful.  Arian actually had quite a bit of contact as he shot through the line, but you can see him as the streaking blur at the bottom of the screen (running past all his offensive linemen who are standing around because the Tennessee guys are either on the ground or running in circles).  Notice that he's not even through the traffic when Schaub preps to throw.  The Titans, who have finally realized it's a fake, have begun pooping themselves in lieu of covering Foster. 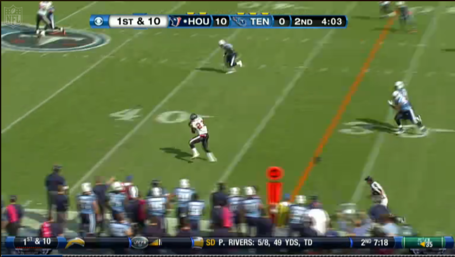 Give Schaub credit for putting perfect touch on the ball.  Arian catches it in stride, and look how open he is!! 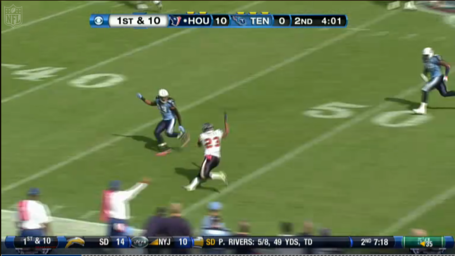 Then we see what makes Arian Foster so special.  He sees that Michael Griffin has committed to catching him along the side line and has his hips completely turned in that direction.  Foster makes a perfect cut inside.  But oh no!  Will Witherspoon now has the angle to catch him. 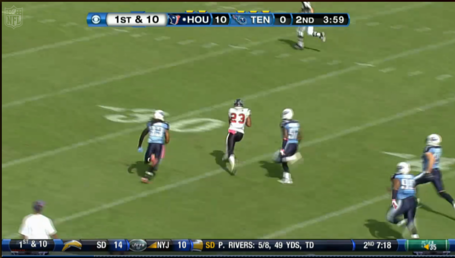 No he doesn't.  The subtleness of this second cut is a thing of beauty.  It should be immortalized in the Uffizi. 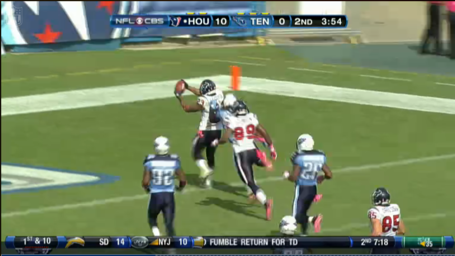 You know how this ends.

Even though the Texans had a 10 point lead before this play, the game was still strongly contested.  While this play didn't put it out of reach, it gave the Texans a ton of confidence while really putting a dent in the Titan's hopes.  The entire feel of the game changed after this one beautiful play.

The real catalyst though is Gary Kubiak.  I've badmouthed Kubiak as much as anyone (ok, maybe not that much), but if we're going to fault him for his... well... faults, then we need to credit him for teaching this team to run the best play action fakes in the league.